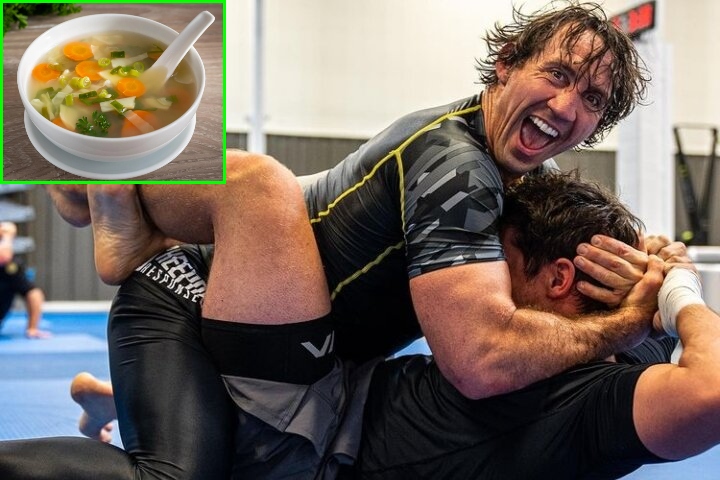 There’s a world of difference between sports BJJ and combat BJJ… With one being fantastic for use in training and the other for real-life scenarios.
Tim Kennedy – a BJJ black belt, UFC veteran, as well as a Green Beret and Special Forces Ranger – shares one example. The example of making soup:

I have a judo subfloor, Fuji mats, padded walls, air conditioning, fans… It’s just the most conducive environment for where it’d be nice, safe to train.
[But] when you and I step out on the parking lot, the whole world changes about what Jiu-Jitsu should look like.

So, “making soup” is when I take that Back Mount and I just take their face… And push it into the ground.
You know, I only need an inch to break his orbital socket, his nose, on the concrete. [Which then results in a mix of blood and other fluids coming out of the person’s nose and mouth.]

Kennedy explained how he was teaching a self-defense course in New York, during which a BJJ black belt went for a Leg Lock… While having a gun pointed to his face:

We’re fighting for rubber guns and knives. So, I’m in Half Guard and I take his [the training partner’s] gun from the waistband. So now I have his gun.
And he, like, dives underneath like he’s going for a Leg Lock.

And I’m just standing over him and kind of moving my feet. I tap him on his forehead with the gun… And he still hasn’t had it processed [that] this piece of plastic was hitting him in the face.

But then he finally opens his eyes, and this realization that I’m tapping him in the face with a gun as he’s diving for a Leg Lock – it’s just [a realization] of how sports Jiu-Jitsu and combat Jiu-Jitsu [are different].

Tim Kennedy shares more of his opinion on the video below: