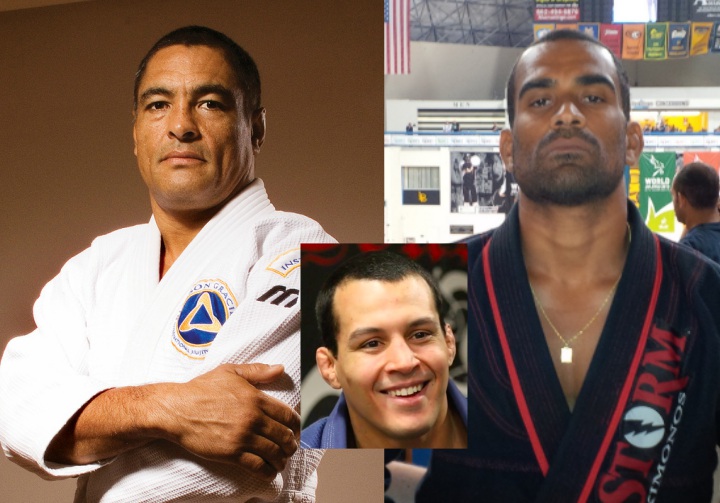 Earlier this, Rickson Gracie shared his thoughts on the evolution of Jiu-Jitsu and he made a claim that nowadays when he goes to teach BJJ seminars to sport BJJ schools, it reminds him of the times when he was teaching Karate black belts in the early 90’s who had no knowledge of Jiu-Jitsu and were blown away:

Rickson’s comments were heard by many members of the Jiu-Jitsu community. Some supported his views and some were offended. MMA fighter and former ADCC champion Vinny Magalhaes, who used to be one of the top Gi BJJ competitors back when he was still at Gracie Humaita in Brazil, heard Rickson’s comments.

Vinny is known for speaking his mind.

In a recent interview with Jiu-Jitsu Mag on their new App, Vinny commented talked about Rickson’s controversial self proclaimed 400-0 fight record, and even compared it to Renato Laranja’s (invented) 27 times world BJJ champion titles:

“Renato Laranja is a 27 times world champion (smiles). I was just 3 years old when he won his first world title. Even thoughi have just one world title as a black belt, I feel that it means much more than his 27 world titles, because people actually got to see my world title. He’s 27 times world champion but people didn’t see one single match. There’s no footage of that. I would say that its similar to Rickson Gracie’s claim of having 400 fights without one loss. It’s pretty close. Except the numbers are a little bit off. At least Renato doesn’t make up those triple digit numbers (laughs)”

You can watch the entire interview, along with everything else by downloading the free app along with Issue 1.1 of Jiu-Jitsu Mag which is free as well: https://itunes.apple.com/us/app/jiu-jitsu-mag-360/id1199836338?ls=1&mt=8 and https://play.google.com/store/apps/details?id=com.jiujitsumag.android

The great Rickson Gracie claimed to have been unbeaten in BJJ, Wrestling, Sambo, challenge matches, Judo and vale tudo fights with 400-0 record which has been disputed by many people.

Ron Tripp, The only Man to Defeat Rickson Gracie in Official Competition