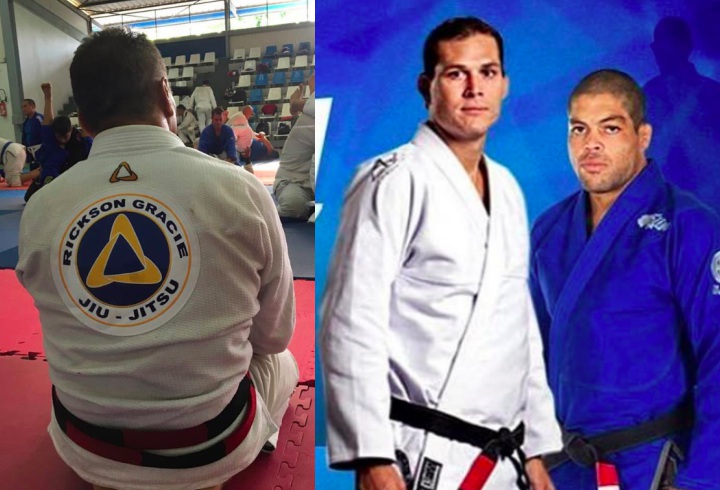 BJJ world champion Felipe Costa, has some very interesting thoughts on the matter:

When I started learn Jiu-Jitsu back in the days, there was no Gracie or Brazilian Jiu Jitsu, there was no Sport Jiu-Jitsu or Self Defense Jiu-Jitsu. I learned JIU-JITSU, where the Self Defense was part of the curriculum, just as much as what is today call sport Jiu-Jitsu.
Let’s be completely honest, trying to say that Gracie Jiu-Jitsu is different from the other JJ is just a way of selling the same product. Nothing wrong with that, but is the same.
Now, I have to agree that most higher belts from my generation and after do not know or at least do not care for the self defense aspect of it. My opinion? It’s a mistake not to teach/learn all together. I have no doubt that my experience from self defense gives me an advantage when is time to understand where certain position come from, knowing the origin, the history of something (even martial art), will help you develop better and enable you to take better decisions.
But don’t take me wrong, I love the sport aspect of it and couldn’t careless that berimbolo, lapel guard or whatever technique can’t be apply on street.
Self defense was my motivation to start training, but the sport aspect of it is what made me stay for so long.
I see the sport aspect as the evolution of it, not evolution on the sense that excludes and should be the only thing to be learn, no, not at all. But the evolution meaning that after learning those self defense fundamental and incorporate to your life, there is no more fun way than just roll and that is the point where the sport enters.
I believe my generation changed the mentality of teaching, the sport aspect have a good influence on this. Today I don’t see in the academies black belts teaching the students to be ready to fight at any moment like when I grown up. The environment is much more relax. Instructors from different teams are friends and encourage their students to visit other academies and, the consequence of that, is a faster evolution to everyone.
I would go even further and venture to say that a “Sport Jiu-Jitsu only” student would still be able to defend himself perfectly in a self defense situation ( read my words, self defense, not MMA, that is something else), so in the end, what is right or wrong, as long as you are teaching/learning the right values and having fun?
Over 20 years in BJJ made me change many of my perceptions of my sport (or martial art, whatever you prefer), I no longer believe that it can be apply against anyone, no matter the size difference, I think that is a mistake and even dangerous to teach that to your student, but I’m sure that Jiu-Jitsu gives you THE BEST chance a smaller person will have to defend himself from a bigger aggressor. No other style will give you a better chance. So in the end, I still believe that if you have to learn one martial art alone, Jiu-Jitsu / Gracie Jiu-Jitsu / Brazilian Jiu-Jitsu is the one!