Updated List of BJJ Red Belts: There are Much More than You Think! 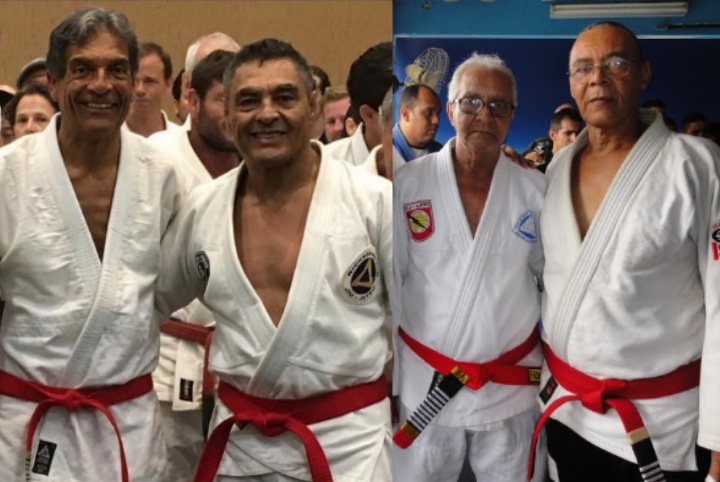 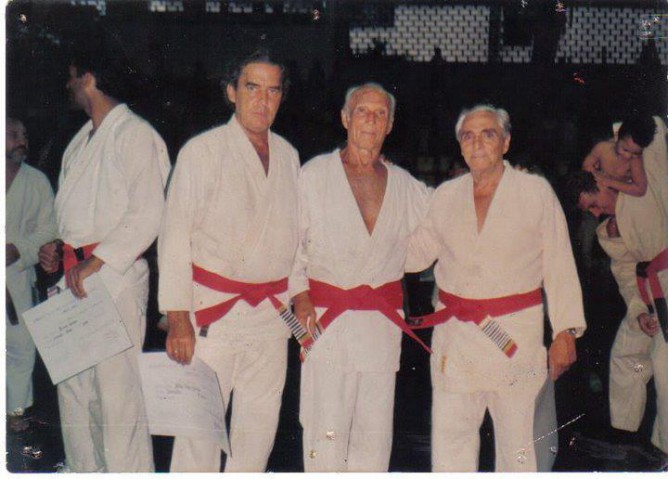 Here is an updated list of BJJ red belts and most people would be surprised to see how many there actually are:

1.Pedro Hemeterio – The first student under master Helio Gracie to achieve the red belt, represented the Gracie Academy in many challenges and taught jiu-jitsu in São Paulo State for more than three decades.
2.João Alberto Barreto – A Grand Master and one of the most important figures in the BJJ community. A red belt under Helio Gracie, he is famed for his unbeaten competitive record in the 1950s. He is the brother of GM Alvaro Barreto and GM Sergio Barreto.
3.Alvaro Barreto – Grand Master Alvaro Barreto is a Brazilian jiu jitsu red belt (9th degree) and one of the most important men in BJJ, being also the brother of GM João Alberto Barreto and GM Sergio Barreto.
4.Flavio Behring – head coach of Behring Jiu-Jitsu Association, Flavio teaches seminars over the world and hold affiliated academies in Europe.
5.Carlson Gracie – Son of Carlos Gracie, trainer of UFC fighters, with a very successful professional fight career.
6.Carley Gracie – Son of Carlos Gracie and former Jiu-Jitsu and Vale Tudo Champion.
7.Geny Rebello – Grandmaster given a commemorative tournament by the Jiu-Jitsu Federation of Rio de Janeiro.
8.Armando Wridt – Undefeated vale-tudo fighter who is one of only 7 people to receive a red belt from Hélio Gracie.
9.Oswaldo Fadda – Perhaps the only individual coming from a non-Gracie lineage to earn a red belt, the Fadda academy was instrumental in bringing Brazilian jiu-jitsu to the poorer areas of Brazil.
10.Pedro Valente – A famous plastic surgeon, Dr. Valente is the father of the Valente Brothers, Pedro, Gui Valente, and Joaquim. Student of Hélio Gracie since 1953.
11.Wilson Mattos – Perhaps the oldest student of Oswaldo Fadda.
12.Luis Carlos Guedes de Castro – Another black belt under Oswaldo Fadda. Among many accomplishments as a teacher and competitor, Guedes disarmed a gangster in a crowded Rio de Janeiro train who was robbing the occupants with a pistol.
13.Francisco Mansur – One of only six people to be granted a professor’s diploma by Hélio Gracie. Founder of Kioto Academy.
14.Rorion Gracie – One of the founders of the UFC who was instrumental in bringing No-Holds Barred Fighting to North America.
15.Osvaldo Alves – Studied under Carlos Gracie and is the current IBJJF Technical Director.
16.Relson Gracie – Son of Helio Gracie and Brazilian national champion for an unprecedented 22 years. Founder of Relson Gracie gyms.
17.Carlos Antonio Rosado – Carlson Gracie Sr. only red belt student; the highest ranking member of Carlson Gracie’s academy.
18.Renato Paquet – A grandmaster who had a judo black belt and two boxing titles in addition to his red belt.
19.Francisco Sá – Known for his morals and honor in martial arts and in particular our Jiu-Jitsu, he died in 2013 at age 77.
20. Robson Gracie (also known as Carlos Robson Gracie) – President of the Jiu-Jitsu Federation of Rio de Janeiro.
21. Amelio Arruda: started in Jiu Jitsu at 27.
22. Arthur Virgilio Neto : He was a student of Carlson Gracie, received the red belt and the ninth grade in April 2014
23. Candido Casale “Candoca” :  “Candoca” as he is known, was a student of George Gracie, and received the red belt and the ninth degree of Jiu Jitsu in September 2012.
24.Crézio Chavez: Competitor Jiu Jitsu in the 1950s, was called by Helio Gracie’s “young goat” because of his speed and technique.
25.Deoclécio Paulo: Major of the Army, Master Deo as he is known in the 40’s trained at the Academy of Oswaldo Fadda. Instructor taught Jiu Jitsu in several regions of Brazil and also in Chile.
26. Eduardo Gomes Pereira: Eduardo Pereira, trains Jiu Jitsu since 1951 having learned from the great George Gracie.
27. Geraldo Flores: He was a student of Oswaldo Fadda, one of the main developers of Jiu Jitsu in the north of Rio de Janeiro.
28. Helio Vigio: Legendary Police delegate.
29. José Higino : Red Belt 9 degrees, started in Jiu Jitsu when he was 11, and was a master student Adherbal Bapstista
30. Julio Secco: started in Jiu Jitsu at 12 years old until 62 years. Lives in Rio Grande do Sul, where it manages 3 academies.
31. Luiz Franca: He was a direct student of Mitsuyo Maeda and Satake Soishiro, and had as a student Grand Master Oswaldo Fadda.
32. Nahum Rabay: Wrapped with Martial Arts for over 60 years, Nahum Luiz Rabay is a strong advocate of the use of Jiu Jitsu especially as self-defense
33. Nilton Pereira da silva: started in Jiu Jitsu at only 7 years old. His father Joao Ignacio Pereira, placed him to train Jiu Jitsu.
34. Octavio de Almeida: George Gracie student, Octavio was crucial figure in the development of Jiu Jitsu in the state of São Paulo in the decades of 50 and 60 .
35. Oswaldo Carnivalle: George Gracie student, was one of the pioneers of Jiu Jitsu in the city of Sao Paulo in the decades of 50 and 60. He faced many difficulties to keep his academy, was forced to participate in championships of other sports such as Judo and Wrestling, to defendthe name of Jiu Jitsu.
36. Oswaldo “Paqueta”: With origins in Judo and weight lifting, he was a great friend of Carlson Gracie, and one of the best Jiu Jitsu competitors of the 1950s and 1960s.
37. Paulo Mauricio Strauch: The Red Belt 9 degrees Paulo Mauricio Strauch, was Reylson Gracie’s student and in 1984 founded his own academy, revealed numerous fighters gentle art, including no less than Caio Terra.
38. Pedro Emerito: The first student with Helio Gracie to reach the red belt, represented the Gracie Academy in many challenges and taught in São Paulo for more than three decades.
39. Walter Nogueira: Red Belt 9 degrees of Jiu Jitsu, is now president of the Brazilian Jiu Jitsu Olympic (CBJJO).
40. Orlando Saraiva: red Belt 9 degrees. He graduated Black Belt under Carlson Gracie in 1969. He started training Jiu Jitsu with Master Oswaldo Rosa, “Paquetá”.
50. Rickson Gracie: red belt 9 degrees.Son of Helio Gracie. He was promoted by his older brother Rorion Gracie.

The 10th degree red belt was given only to the pioneers of Brazilian jiu-jitsu, the Gracie brothers:

1. Carlos Gracie – (Brazil, 1902–94) was taught judo by Otávio Mitsuyo Maeda, a Japanese emigrant to Brazil who was then a 4th dan Kodokan judoka. Carlos then passed the teachings on to his brothers Oswaldo, Gastão Jr., Jorge, and Hélio. In 1925, the brothers opened their first academy in Brazil, marking the beginning of Brazilian jiu-jitsu.
2. Gastão Gracie
3. Jorge (George) Gracie
4. Hélio Gracie – (Brazil, 1913–2009) was a Brazilian martial artist who, together with his brother Carlos Gracie, founded the martial art of Gracie jiu-jitsu, known internationally as Brazilian jiu-jitsu (BJJ). Until his death, Gracie was the only living 10th degree master of that system, and is widely considered as one of the first sports heroes in Brazilian history.
5. Oswaldo Gracie