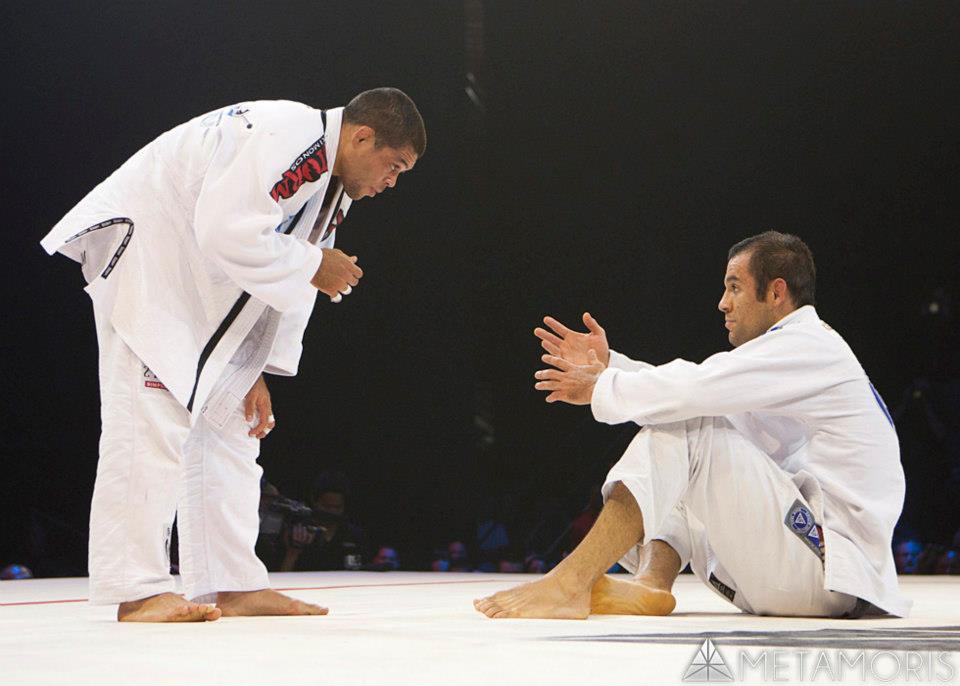 After 20 minutes of submission grappling ended without a finish, Andre Galvao was deemed to have a “draw” with Ryron Gracie. T.P. Grant gives us his thoughts on what the bitter (and booed) post-match speech by Galvao means to him and to the sport.

When Ryron’s brother, Rener Gracie, began to question Andre Galvao in the post-match interview, it became very clear that Galvao was unhappy with the format of the competition. The Metamoris event was organized by the children and grand-children of Helio Gracie and was arranged as a submission only event with a long time limit. Metamoris did not use the points-for-position-improvements system used by most major BJJ competitions. As a result, even though Galvao positionally dominated Ryron, the match ended in a draw.

Galvao was not happy about this, as it very much appeared to most viewers that Ryron was not opening up much and simply grappling to avoid being submitted. Galvao challenged Ryron to a jiu jitsu match with a point system and seem displeased with the event. Galvao even took to twitter to continue to voicing his grievances, in a recently deleted tweet saying “Everyone fought to win yesterday except one fighter. Congrats @metamoris event”.

Galvao’s words likely come from a place of disappointment and a desire to win, but it is largely making him appear bitter. If he was surprised by how Ryron grappled, then it just meant he was not listening, as almost all the press Ryron did for this event was focused around using ‘survival’ skills and stressing that Galvao was not going to tap him out. Aside from inter-athlete drama that seems to infect every sport, there is another level to this disagreement and it really strikes at what Metamoris was supposed to be all about.

Helio’s side of the Gracie family has always been critical of point systems, claiming point systems dilute the art and lead it away from its self-defense roots. They critique competitors that plan to win on points and don’t make a real effort to submit opponents. Many accuse that form of BJJ of just being ‘a game’ and not being a true form of Brazilian Jiu Jitsu.

Metamoris Pro is a version of jiu jitsu competition closer to their vision of the martial art. Minimal rules, great competitors, long time limits and the submission focus of the competition resulted in a good deal of excitement for the event and the matches were generally thrilling. It is a concept I very much enjoyed and personally would love to see happen again, but Galvao’s complaints point to a legitimate problem with submission-only marathon matches.

What set Brazilian Jiu Jitsu apart from other submission grappling arts of the mid-20th century was the art’s focus on position. It is an old truism of jiu jitsu instructors preach to their students “position before submission” and the Gracies of the 1960s scoffed at Luta Livre fighters who would willingly surrender position in search of a submission. But we saw several instances last night of fighters willingly surrendering dominant positions because there was no point penalty and they wanted to allow their opponent to tire themselves working for submissions. In short, the positions didn’t matter.

But position does matter if the goal is to stay true to the self-defense nature of jiu jitsu and the point systems of the IBJJF rewards fighters for achieving these positions. It reminds the bottom fighter to be mindful of the positon and it causes the top fighter to want to stay on top. Galvao has a legitimate claim that he out-grappled Ryron because he was able to attain positions of dominance on him and in an MMA or Vale Tudo context, he could have done great damage.

On the flip side of that coin, BJJ students training for self defense are taught to converse their energy because they don’t know how long they will be fighting. If they find themselves in side control and are positioned in a way that they are safe from attack, they are taught to wait for their attacker to make a move and then counter – and that is exactly what Ryron did against Galvao. When Galvao was controlling Ryron, the Gracie representative waited and when Galvao went to attack, Ryron used the opening to escape either back to guard or back to his feet. It is a stratagem that is completely useless in a timed match, but could be very useful in a situation where gassing out would be lethal.

In short, both sides have legitimate flaws in their approach. All martial arts that attempt to have any form of safe sparring or competition suffer from this problem of making their competitions as “real” as possible, but also making it safe and competitively interesting. MMA allows strikes, but the gloves impede grappling, time limits dictate tactics and the judges overvalue certain forms of top position. Point scoring BJJ places a premium on position, but the rules and scoring systems began to shape to martial art to fit the rule set. Submission-only matches put the focus on finishing, but lose sight of the importance of position. No one system of competition will ever hold all the answers.

Last night was a fantastic night for Brazilian Jiu Jitsu, as the international community came together online to watch 12 of the best among them compete. It was also a reminder of the divides in the martial art that drive schools and instructors apart.