The BJJ Belt Promotion Mindset All Best Students Have 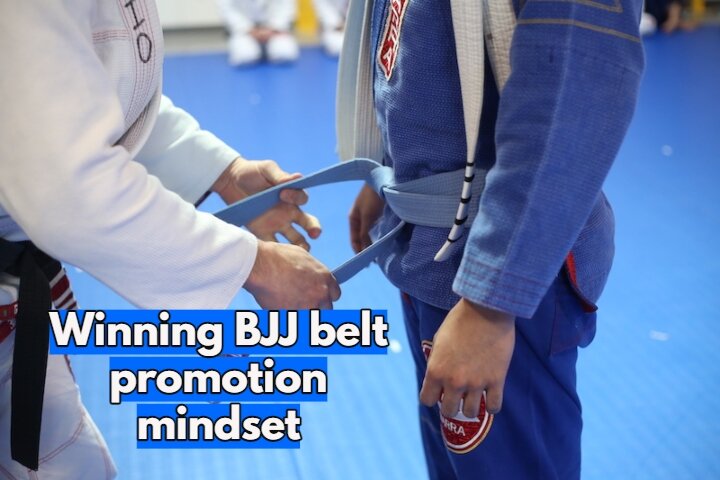 Let’s face it: every Jiu-Jitsu student looks forward to their next belt promotion. If they say that they aren’t… They’re probably lying.
However, there’s a difference between being excited about the belt and needing it. What’s more, those who don’t need the belt are the ones who will, eventually, achieve their full potential.

Here’s the BJJ belt promotion mindset that all of the best students have.

THE BJJ BELT PROMOTION MINDSET YOU NEED TO HAVE

Those who keep training for a lifetime – and those who progress the best – are not focused on the belt promotion. While they may be happy when a thought about the promotion crosses their mind, their focus is on the journey.
That is to say, these students find the reward in training itself. Not in the belts.

While proud of their belt, they’d keep training Jiu-Jitsu even if they were demoted to a no-stripe BJJ white belt. Even if they were to stay a white belt their all life.
Why? Because they understand that the journey is more important than the destination; the training partners around them, the atmosphere in training, the sweat, the pushing of oneself… It’s what makes them feel fulfilled and enthusiastic about the very next roll and drill.

So, if you want to become one of the best BJJ students in your academy, make it a point to appreciate your belt and belt promotions – but, simultaneously, aim for training because of training itself. Not because of the “reward”.
Nick “Chewy” Albin shares more of his opinion on the video below: