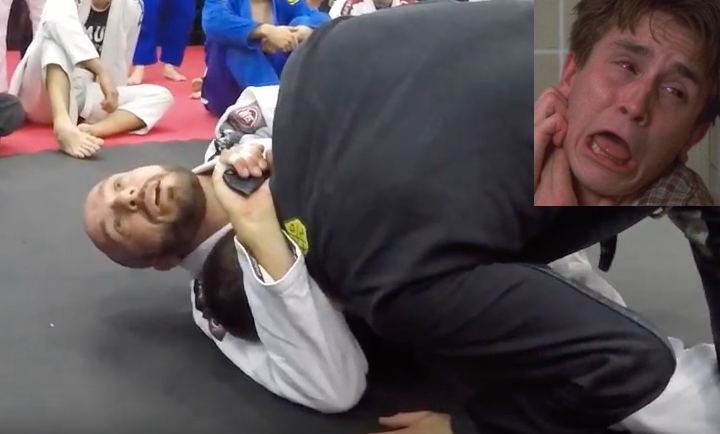 The loop choke is one of the deadly subsets of those lapel chokes. The thing that sets the loop choke apart from other lapel chokes is the sneaky nature with which you are able to land it. The true success of the loop choke in that fact that the opponent actually things they are actually making progress, escaping or passing your guard and pow, lights out, the choke is cinched tightly.

Here is a loop choke variation that will catch your opponent off guard: loop choke using the opponent’s lapel.

This technique is the trademark of 4th degree black belt Hugo Fevrier (Tropa de Elite based in Cannes, South of France) who is part of the second generation of French BJJ Pioneers. He started training in the mid 90’s and never looked back. His main titles are 3X European Champion, 3X Silver medalist at Europeans, 3X bronze medalist at Europeans ( in differents belts from white to black and weight and absolute); French Champion NoGi ( weight and absolute black belt) and many other titles gained all around the world.

Hugo Fevrier recently conducted a BJJ camp at Kimura BJJ Serbia in Belgrade, Serbia where he showed his lapel choke from all positions either top and bottom.

The important detail is to grab the lapel at the tip and kick your opponent’s knee so that they move their head down. Just like a regular loop choke. If for whatever reason the choke isn’t there right away, you can sweep and mount to finish the choke.