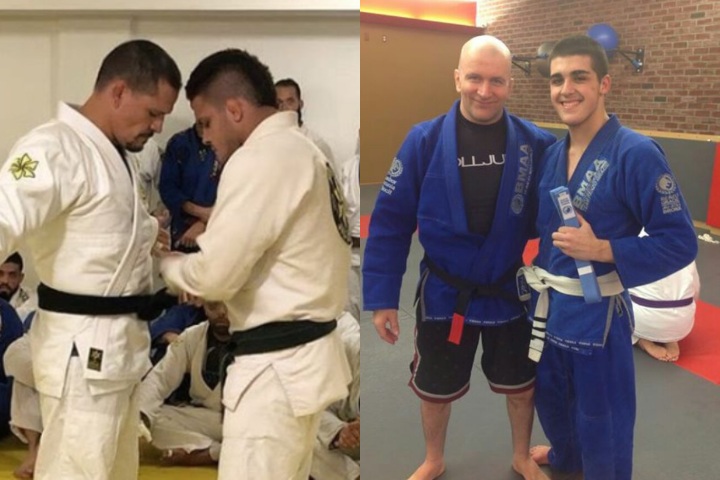 Here is what the great Saulo Ribeiro had to say about the belt progression in BJJ and why you shouldn’t make a big deal out of it:

“If you worry about the time and speed of your promotions, you lose yourself. Remember, before you are a blue, purple, or brown belt, you want to feel like one. You must feel that your skills are there. You cannot fool youself. Attaining a belt is just proof that your teacher is connected with you. You will know when you deserve it. My role as a instructor is to be there and say “Its time.” But you should already realize this on your own.

Jiu Jitsu Is not math, and promotion is not based on attendance or calendar dates. A regimented promotion schedule based on dates or attendance is the worst way to gauge development. Jiu Jitsu is more complex than this.

There is no sense in chasing a belt and getting it as fast as possible. Often, people do not see that black belt will be their longest belt. Remember, it doesn’t matter if you get it in four years or fifteen. Either way, you will have the rest of your life with a black belt around your waist. Building the belt is what matters”

Another great Jiu-Jitsu mind, John Danaher was asked a question and answered something similar:

I recently listened to Joe Rogan’s interview with Firas Zahabi where they discussed how one of his purple belts had submitted several seasoned black belts in competition and that the two of you differed in opinion as to whether this indicated that he should be promoted to brown belt.
I wanted to ask what you feel are the requirements for a blue, purple, brown or black belt at your academy and if it is subjective or are there blanket levels you expect for each belt.

Second, despite this, people probably put more obsession and concern into belt color than than they do into anything else in the sport. In truth there is only one belt that counts – black belt. Understand that if you study for a lifetime you will spend the vast majority of your training years as a black belt and look back and wonder why you ever concerned yourself with worry over how long it took to go from blue to purple belt.

Once you become an adult no one cares what grades you scored in junior high school – though when you were back in junior high school they probably seemed like a big deal to you. As an adult, people only care about your achievements as an adult. So too with belts. Black belt denotes your passage into training adulthood – nothing more. It is a symbol that you can now enter into a more serious phase of learning where you know enough to formulate your own developing approach to the game and begin to teach others. You still have a lifetime of learning and development ahead of you.

How long it takes to make each advance in belt will be determined by several factors. Age is one of them. I don’t believe in giving black belts to children as many martial arts do. I’m glad that Jiu jitsu has separate belts for children. I don’t use the same performance criteria for older athletes as I do for young healthy athletes – that would be unfair. Background is another factor. If an athlete is already very experienced and skilled from years of training in a related grappling art and thus makes very fast performance improvements, he or she is far more likely to get promoted quickly.

Well rounded technical proficiency and an ability to perform that under the stress of sparring is the number one indicator I look for. If someone is winning with just one or two moves and has gaping holes in the rest of their game – that’s a problem. If they are winning mostly due to their physical attributes – that’s a problem. Their ability to enhance the performance of the training room with their presence through a team player/harmonious attitude is another factor.

I am a traditionalist who believes MERIT (as roughly outline here) is the only criteria for a belt. I don’t give belts for time served. You don’t just show up and get a belt. That is the antithesis of everything I stand for. When you get that belt you should know in your heart you EARNED it. Belts given out because you showed up to a certain number of lesson are like inflated currency – worthless in the market. But belts given because you can perform skills that few others can at your age, size and time of training are like gold – they will hold value wherever you go.

In a world of hustlers, con men, marketers and salesmen – your belt should be something you tie up with pride and a sense of genuine accomplishment. At the end of the day – don’t give a damn about what what color your belt is – worry about what you can do on the mat. The people we all admire the most are those whose performance level exceeds the expectations of their belt, age and time of training. Make that your goal rather than the superficial concern over whether it took you twenty four months rather than twenty eight months to get a new belt color.

Train hard, train intelligently, help others do the same and improve a little every day – the one thing that counts – your performance level – will increase over time. As your peers and teachers observe your success you will win them over and change their opinion of you – that is something praiseworthy and a source of healthy pride. Focus on the deeper aspects of Jiu Jitsu and every day make yourself better than you were the day before – do that consistently and the superficial aspects of Jiu Jitsu – belt color – will take care of themselves.

So you heard it from two great BJJ minds. We should all be more concerned about progressing in Jiu-Jitsu and not with the color of our belt.