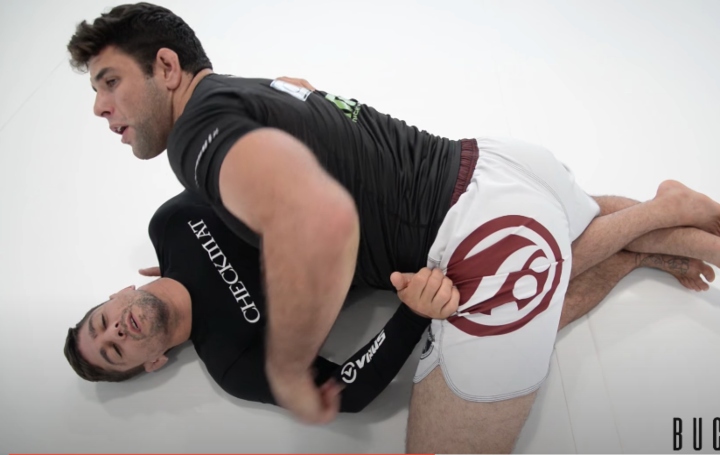 Jiu Jitsu doesn’t have to be complicated in order to work… In fact, most often it’s the basic principles and techniques which will grant success! It’s just a matter of tying up the basics you’re good at in such a fashion that they work together.
And what better sequence of moves and positions to tie together is there other than pressure passing your opponent’s guard and then going straight for the Mount! Marcus „Buchecha“ Almeida shows how to do just that.

GETTING THE PRESSURE PASS…

To get started with the pressure pass setup, you first want to make sure that your training partner is laying flat on their back. Then, Buchecha shows that you have to establish two points of control; one on the partner’s hip and the second on the partner’s knee.

Now, while you’re keeping the hip in place, the knee control won’t remain static. What you need to do is pull the training partner’s knee in-between your legs. However, this is not a big pull. Instead, you’re supposed to kind of „nudge“ it to the back, ever so lightly – but firmly, too.
As you’re pulling this knee to the back, you also need to slightly squat down and drive your own knee forward; so that your thigh makes contact with the training partner’s shin. This is why you’re not pulling that leg with much force. It’s not the pulling motion which will grant you the pass, but what you’re going to do next.

And what you’re going to do next is incredibly easy to understand… But will take some practice and getting used to until you get both the technique and timing right. Once you’ve executed the pull and driven your knee forward, Buchecha explains that you have to post and break your hip to the side you’re already creating pressure at. And you have the pass! Get an underhook, establish shoulder pressure, and it’s time to transition to the Mount.

… AND TAKING IT STRAIGHT TO MOUNT

So, once you’re in this position, you’ll most likely end up in a sort of a modified Half Guard where your training partners will be trying their best to keep you in place, out of harm’s way. But joke’s on them! Let’s see how to get past this last line of defense and get them under your heavy Mount.

Essentially, their last line of defense here are their legs. To clear them, Buchecha explains that you simply have to drop your knees to the mat and exert pressure on their hip with your own. Then, you have to bring your leg underneath their own.
Now, why would you position your leg in such a way? It’s simple; you need to make your training partner feel uncomfortable, so that they’ll lose any sort of control over you. That being said, you’ll do this by curling your leg up. This will place some real strain on the partner’s knee, as it’s being bent in a direction it’s not supposed to.

As a result, your training partner will look to pull their leg out and, therefore, give you an easier access to the Mount transition. But yet another thing that they’re doing and aren’t aware of – one that would otherwise be completely justified – is that they’re posting and pushing on your hip.
By doing this, they’re trying to keep you away from exerting more pressure and passing to Side Control… But you have freed up your leg; and this means that their pushing will just make it easier for you to simply slide into the Mounted position.

Watch Buchecha demonstrate this setup below: