McDojos: How To Recognize Them And What To Do 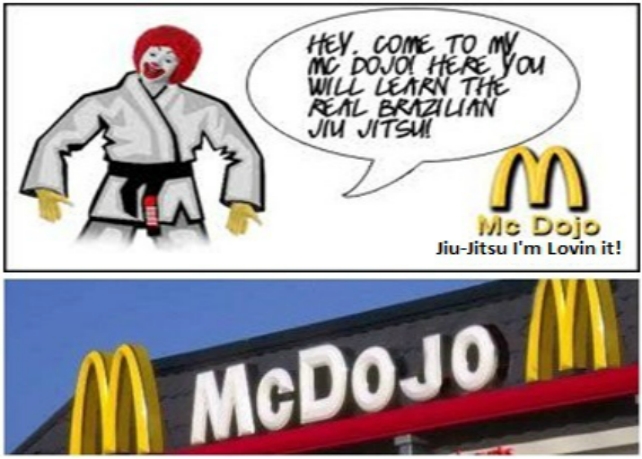 What are McDojos, and how do you look out for one?

As a beginner in martial arts, it might be difficult to tell the difference between a reliable academy and a McDojo. A McDojo is a martial arts academy that employs shady or inexperienced instructors who are only interested in franchising, and making money. Here are a few ways to spot one:

For starters, the academy should not be staffed by employees with low belt ranks. Although to a beginner in martial arts, an average BJJ blue belt might seem impressive, it’s not enough to qualify as a head legitimate teacher. The academy should have at least one black belt instructor, and the classes should not all be staffed by beginners. It’s also important to check if the head instructor has any BJJ lineage — something which is either clearly displayed in the academy, or answerable by him/her. If the instructor dodges the question, or gives a vague answer, then they aren’t legitimate. It’s not uncommon for instructors of McDojos to purchase a black belt, and completely lack any martial arts skills. There also should not be more black belts in the academy than lower belts.

Spotting a McDojo shouldn’t be hard, because the instructors are always trying to make a profit. Red flags to look out for are registration and cancellation fees, pressure to sign long term contracts, and a mandatory purchase of the academy’s attire to train. If the prices of training at the academy keep changing, and no new gear or extra classes are being added for the students, that’s another sure sign that something is fishy. Although it’s not uncommon for the price of training to rise slightly because of a change in higher overhead costs, the academy should compensate their students by adding more classes or invest in gym infrastructure.

Another tell-tale sign of a McDojo, is watching if the head instructor rolls with his/her students. Unless they are injured, a black belt instructor should always be rolling with their students, even if they are picky. If for some reason they stand back, it may mean they have no clue what they are doing.

Although Jiu-Jitsu builds lots of positive characteristics, fake loyalty should not be one of them. Staying at an academy because you like the instructor is not what I’m talking about. Coaches handing out belts for a student’s loyalty to stay there is a big no-no. Buying stripes, or noticing other students go through a few belts during the year, is something to look out for when choosing a school.

If the academy even feels a little cult-like, stay far away from it! Academies that shun you for trying out other schools, or lock you into a long-term contract without any wiggle room are good examples of McDojos. A real BJJ academy should be accepting and welcoming of students, and not discriminate against them. Instructors at a real academy welcome students and help them train, no matter how long they plan to stay or where they have been in the past. A BJJ teacher wants their student to be there, and enjoy training at their academy. However, if the student decides to leave, it should not close doors for that BJJ practitioner in the future. Students should choose academies because they want to be there, rather than be conned, or locked into staying.

An instructor who requires unpaid favors from students is probably running a McDojo. This is highly unprofessional as are coaches who date multiple students in the academy. Dating your students is extremely inappropriate, and any legitimate teacher would be highly aware of upsetting the relationship dynamic in the class. Instructors who get annoyed, or don’t seem knowledgeable in answering technique-based questions are also important to look out for. When visiting an academy, pay attention to the interactions between students and teachers.

There’s nothing wrong with trying out other academies to see where you fit in best. In life and in martial arts, there can’t be any progressive change without contrast. But with these tips in mind, it should be easier to spot the perfect academy and have an authentic, enjoyable experience in BJJ. And remember: Just because an academy is more expensive, does not mean it’s a better place to learn. Always trust your gut, and go with what feels right to you.