Henry Akins: The Biggest Lesson I Learned From Rickson Gracie 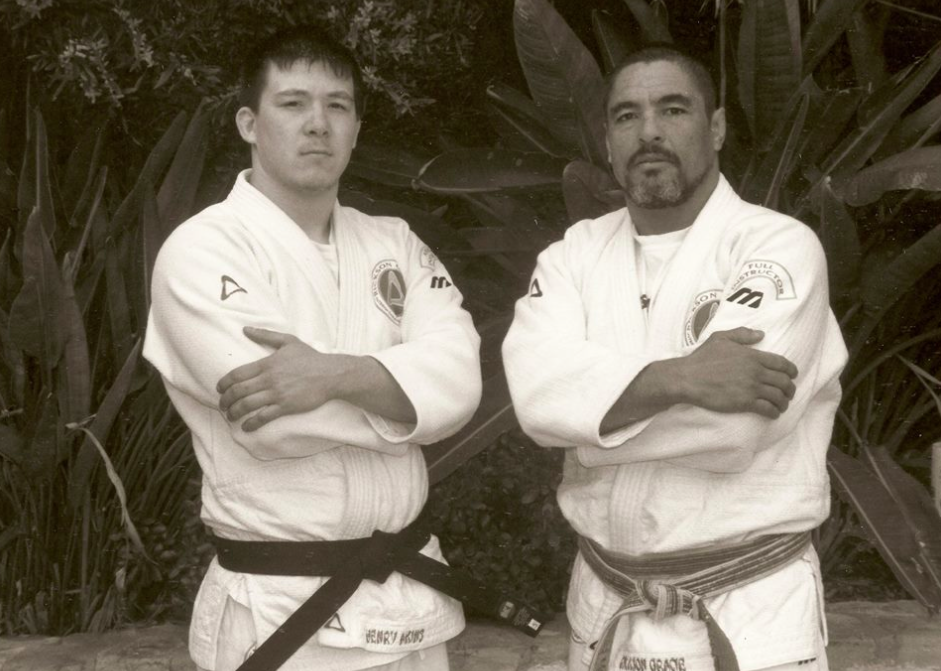 “The training is all in your mind!”

For a long time in my training like most people I always thought I had to train with the best and the toughest guys to improve and get better.  Then one day after talking with Rickson I realized my strategy for how to get the most out of my training was all wrong.

You see, I witnessed first hand so many times Rickson training with the current world champion of whatever year and whatever weight and absolutely annihilate them.  Many times after the training the black belt would say “they have never experienced anything like that” OR “they felt like an absolute white belt training with Rickson”.  I would see him tap guys effortlessly multiple times in a 5 minute training session.  These were guys who were winning the Mundials submitting everyone in their division.  Many of these legendary greats, Fabio Gurgel, Saulo, Xande, Fabio Leopoldo, Paulo Filho, Renzo Gracie, have all talked about their experience training with Rickson.

So out of curiosity one day I asked him ‘You’re so much better then anyone else, who do you train with to improve?”

His answer was… With you guys, my students. The training is all in the mind, I don’t need to train with people better to get better, I figure out ways to always put myself at a disadvantage so I can improve.

Which made me think back to one training where Rickson lined up about 7 or 8 of us along the wall.  There were 3-4 black belts, a brown belt, two purple belts and I was a blue belt at the time.  Rickson called out one of the the purple belts to train first.  After a very brief time, he caught him in the crucifix position and submitted him. They went again and another submission from crucifix.  Rickson ended up catching him 5 times in the same thing and then called one of the brown belts to come roll.  He did the same to him, crucifix 5-6 times within a few minutes.  Then it was my turn…. By now I had seen the pattern and was determined not to get caught in the crucifix, which is usually not a common position or easy to get into.  Hide my arms, I was saying to myself in my head. No matter what just don’t let him catch me in the crucifix. 5 or 6 submissions later… all by crucifix it was time for one of the black belts.  Needless to say he went through the whole row, catching everyone in the crucifix 5-6 times each even though we all knew it was coming.  What’s even more crazy is that we were all resting on the wall and coming in fresh as he ran through each of us.  One after another with something i’m sure as we all watched, were planning and trying to figure out in our heads how to stop.

During one of the rolls with him he actually let me catch him in the crucifix position, and as I was trying to position myself and make adjustments to finish him, he would make tiny movements or adjustments without ever trying to escape. I remember even getting his collar around his neck and somehow he moved and no matter how hard I squeezed I had nothing, he just stayed there relaxed making tiny movements to make himself more and more comfortable. Eventually I lost hope and just gave up the position.

Through the years, after many conversations with him about training I realized, we don’t need opponents better then us to improve and sometimes training with lower level partners is far more advantageous and beneficial depending on what we are trying to develop.

You see, when training with better opponents we are mostly playing defense, because better opponents for the majority of the time will have the better positions to attack so its more learning to stay safe and survive.  When we train with weaker opponents since we can dominate and maintain positions easier we tend to have more opportunity to develop our attacks.  So this is a huge benefit in training, if you want to develop your offense then train with lower level opponents.

Also anytime you learn a new technique, it takes time to develop the timing and feel, it’s very difficult to try to implement a new technique when you are training with people at a higher skill level.  I always tell my students, even though I have a black belt, anytime I learn a new technique i’m a white belt at it.  It takes me time to develop an intimate level of understanding of the technique and how to use it in training. So when I first start trying it I will just play with white belts and see if I can get it to work.  Once I feel comfortable applying the techniques on white belts then I will go to the blue belts and start trying to use it on them.  As I move on to guys with more experience they react quicker and have better sensitivity and a better idea how to move to defend  So I will figure out ways to compensate for their reactions so I can still get the technique to work.  Eventually I will work my way up so that I know and understand the technique well enough I can apply it on other black belts successfully.

The other nice thing about training with lower belts is you can mess up and still be pretty confident you can recover so it allows you to take more risks while training.

Some of the things Rickson would do over the years to develop himself against us would be to train with one arm tied in his belt or sometimes both arms tied, he would try to escape positions with out using his arms at all.  I remember the first time he made me do this in training.  I was preparing for a competition as a purple belt and Rickson brought over a member of our association from Holland at the time who was in town visiting and he told the guy to mount me.  Then told me to put my hands in my belt and i had to get out without using my arms.  I had my doubts that i would be able to get out but I improvised and was able to get out multiple times and learned a lot just in the 5 minutes of drilling.  I tell the story at my seminar sometimes on how Rickson would let people get on his back with both hooks in, put their arms around his neck for a rear naked choke and he would have both hands tied in his belt, he would say go and they were allowed to squeeze as hard as they wanted and he would still escape. He would do this to 6, 7 ,8 people in a row….

Other things I would see Rickson do over the years in his training was he would tell you exactly what he was going to catch you with before each roll, that way it would make it more difficult for him but he would still get it every time.  Sometimes he would let me pick what i would get submitted with, obviously I’d mention things I felt comfortable defending and escaping but he would still figure out a way to catch me.

To develop his defense he would put himself in bad positions and stay there without trying to escape, let us attack and then make small movements to kill or neutralize what we were doing.  Sometimes he would allow himself to get put into a submission and then make tiny movements to either be extremely comfortable again and out of danger or to escape.  Once he did that he would gradually allow things to progressively get worse, allowing the submission to get further along and deeper and see how bad things could get before he could still recover and escape.

People used to ask me all the time how I would do with Rickson in training and there were many times I felt I did quite well but then again I never really knew what he was training or trying to work on or how hard he was actually going.  One week I would feel I did well and gave him a hard time and the next week he would tap me 5 times in 5 minutes, almost every 3 to 4 movements.  I never really knew what he had going on in his mind.

When people ask me what do I think makes Rickson so special, why he’s considered the best of all time I always tell them It’s his mind. Sure he was athletic, strong, flexible, great endurance but i’ve trained with many guys that were far better athletes and so has he..  It’s his MIND and how he would constantly push himself to improve even when he didn’t have the best training partners around.  After all, when i had asked him how does he get better without guys better than him to train with, he had already been the best in the world and had never lost in jiu-jitsu (and never won a match by points or referee decision) for almost 20 years.  These words he shared with me have had such tremendous impact on my jiu-jitsu and training and continue to help me everyday…