Dave Camarillo on Training With Rickson: ‘Was Like Trying To Move a House’ 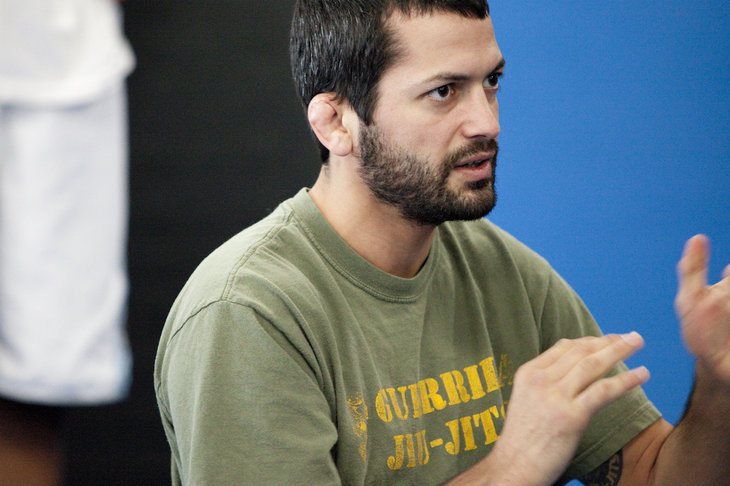 Dave Camarillo is a Judo and Brazilian Jiu Jitsu black belt under Ralph Gracie though he moved away from Ralph’s academy to form his own style which he branded as “Guerrilla Jiu Jitsu”. Dave Camarillo became a mainstream name as a coach after many of his students became big stars of the MMA world, fighters such as Jon Fitch, Josh Koscheck, Mike Swick and Cain Velazquez. Read his full biography on BJJ Heroes.

In the early 2000’s when Dave was still a brown belt, he went to train at Rickson Gracie’s old academy in Los Angeles. He was so impressed by his experience there that he wrote an article in OTM.com detailing the experience:

“Every so often a legend arises out of his/her sport and achieves what only some can dream. An individual stands alone in accomplishments and towers over all who came after them. This artist relinquishes all doubt by their simple word, backed by years of action through his art. Their eyes, with a brief glance, paint a picture of a story that will amaze even those who were previously unaware of their prestige. In boxing this artist is Muhammad Ali, in Futebol it is Pele, in chess it is Kasparov. Another name now shares the same precedence in their glory. His name Rickson Gracie, without question the best Jiu Jitsu fighter to ever live.

The amount of dedication this man has shown for the art of Jiu Jitsu is astonishing. He has contributed to not only the overall growth of the sport, but also the overall growth of martial arts in general. His long path to greatness, seemed a destiny, as he, never without confidence, displayed precision in his techniques and a determination to uphold the Gracie name rendered without omission.

Knowing of his greatness I was guaranteed an incredible experience at his academy. Training with Rickson is like trying to move a house. What he lacks in size he overwhelmingly compensates in technique and pressure. From the moment I engaged my guard, till the time I was tapping, I felt as if there was nothing I could have done to better my situation. His basic techniques nullified my game almost immediately. His control of my movement discouraged my game to the point of nullification. I attacked with a barrage of arm locks and triangles that fell short in his ability to dictate the training session.

The way Rickson dealt with my flexibility, by eliminating my movement was incredible. This inability to move was key in shutting down my game. Rickson is a savage! His abilities of control, pressure, and the understanding of your opponents` abilities and how to annihilate their attacks impressed me and brings questions to my understanding of Jiu Jitsu.

What was even more amazing than his outstanding display of technique, was his open attitude towards me being there. The feeling I felt as I entered his academy was of respect and openness. I felt welcome in a somewhat foreign place. It was soon after my arrival that I experienced a sense of relaxation and was able to train at ease.

All who have ever benefited from the art of Jiu Jitsu owe homage to such a man. For he has created, beyond the extents of great Jiu Jitsu, a system that anyone can participate in. He has devoted his whole life to his art and those students that show the respect and consideration for each other in their search for security in self-defense.

So to all the non-believers, I can only try to persuade you to eliminate all doubt and open your mind to Rickson Gracie. His teachings are like his will, without determent. His face is full of passion and honor, his strength resides in his character, and his name transcends beyond all who make feeble attempts at attacking a Jiu Jitsu Legend.”

Check out some of Dave Camarillo’s competition highlights: