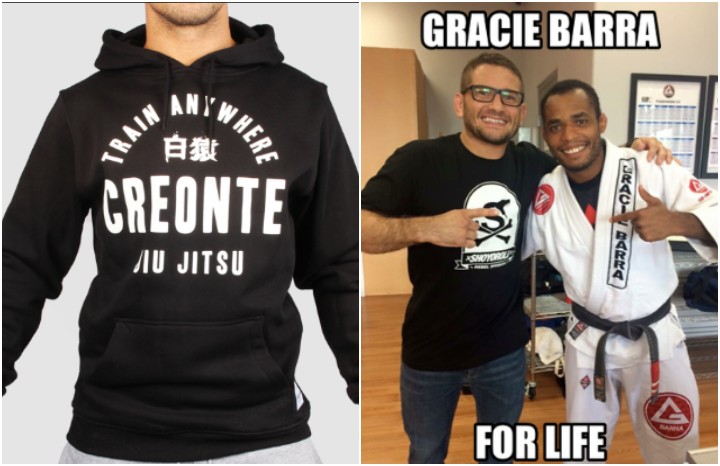 Considered one of Jiu-Jitsu’s most controversial topics, changing teams during a BJJ practitioner’s career  has coined the infamous term: Creonte.

Gurgel recorded a video in which he discusses the subject. He talks talks about the student’s link with the teams and the motivations of the student to change, which are sometimes more the responsibility of the teacher than of the student.
Gurgel has different views than Rickson Gracie regarding cross training:

The video is in Portuguese and we transcribed the main points of what Gurgel is saying:

Fabio says, obviously you’re always loyal to your team and he isn’t bothered by students leaving his academy anymore.

A student leaving his academy could be a problem with him, or it could be because the academy doesn’t offer what the student is looking for (example: academy that’s geared for competition)

Fabio says, “why do I want a guy in my academy if he doesn’t want to be there?”

We get the students we deserve to get, not the ones we want.

Every student has the right to be wherever they want, and to be happy.

With some students we have to make an adjustment, and analyze why we lost that student to begin with.

When you think that it’s just another student, you’re going to minimize that thought of it being a big deal. Especially with students that compete, and are a big part of the team.

If you let a student train for free, that student does not owe you loyalty forever. You don’t own the student. If the student doesn’t feel like they can ever leave you, that’s your problem you’ve created.

Your intention was the best possible one. The student couldn’t afford the training, so you gave it to them for free.

The community of BJJ wants more and more people to participate in BJJ, and help people.

When you start from the beginning with a relationship like that (the guy didn’t have a place to go, cause he couldn’t afford it), you’ve already doomed your state of mind.

You shouldn’t extend your hand, and expect something in return. Meaning the student you helped, doesn’t owe you anything.

You can’t put that burden of eternal gratitude on the student’s back.

Your student should feel free to go somewhere else and be creative, if they want.

You don’t own that person, and pointing the finger to them as “creonte” is wrong.”

Samir Chantre of Ares BJJ had a very interesting response to this clip making rounds through the community.

“Recently I saw many people posting a video where the great Rickson Gracie talks about cross training and being a Creonte (as he said, the person who betrays the instructor).

I’m from Carlson Gracie lineage, if you don’t know, he was the one who created this term (creonte) a long time ago.. Where many things were different…. but time changes, the society changes..

Back on those days, if you trained Nogi, you wouldn’t even walk around a bjj gym, they used to hate each other.. BJJ guys and luta livre (Nogi) guys would nearly kill each other maybe just because they would say their style was better than the other…

Times change, today we all do both and live in harmony…

Somebody that pays the gym is a customer, if you don’t offer what he wants, he will leave you.

Like if you join an university where you’re not satisfied with the teachers you’ll leave and find another one. You’re paying, You’re not the one getting paid.

And one more thing, if you don’t believe in cross training, don’t even waste your time responding to this post… You don’t live in the same World as I do… one quick exemple: look at the highest of the highest level where Leandro Lo, Buchecha, Felipe Pena, Rodolfo Vieira and many others train together all the time… all from different associations… Good luck telling them they’re wrong!

I’m very thankful my instructor was always good about it and would encourage me to train with other people… I improved so much with that… and today, after 20 years of Jiu-Jitsu and living thousand of miles away, he is still my instructor.

So if your student left you, you might wanna look to yourself and see what you’re doing wrong!”

Some of today’s biggest BJJ stars told Tatame their opinion on the term ‘Creonte’.

“Regarding the term ‘creonte’, the athlete always needs to do what is best for him. The Jiu-Jitsu athlete’s problem is that he can’t see in the long run and often makes a decision because the academy gave one more shirt, gave 100 reais, in short. Always based on money and never on that question we should ask: where do I want to be 5 years from now? 10 years from now? ”

About the ‘Creonte’ phenomenon in modern Jiu-Jitsu:

You have to look at what is best for you, look for the best coaches. You can add more coaches but do not forget where you came from