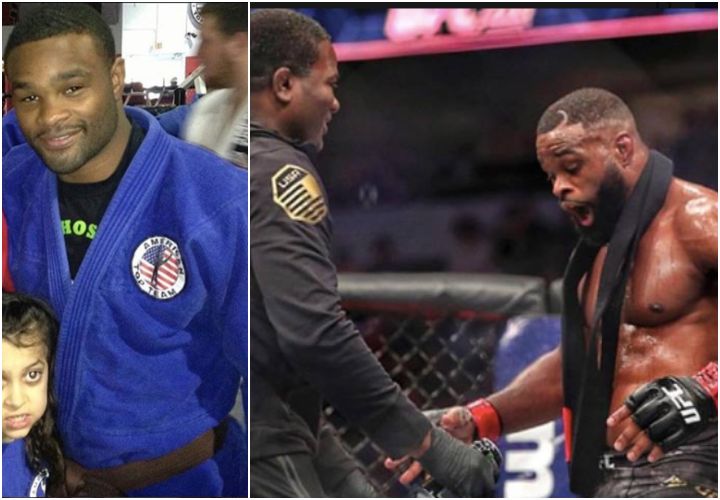 Tyron Woodley’s dramatic win over Darren Till at UFC 228 on two weeks ago was made a little bit more special by the fact that he also got promoted to black belt in BJJ by UFC vet and life coach Din Thomas.

Woodley battered Till on the ground and submitted him with a D’Arce choke. After his submission win, Woodley was awarded his Brazilian jiu-jitsu black belt by Thomas, who is himself a BJJ black belt under former ATT head coach Ricardo Liborio.

Woodley went through all the BJJ belts through Liborio and Thomas.

Happy Birthday @liborioatt ‼️ Thanks for investing in me! On July 29th at #UFC214 I will keep the strap where it belongs, w/ #attnation 💯💯#AndStill @ufc

He has also trained with Marcelo Garcia:

This was not the first BJJ promotion in the ring. Remember:

What a great picture !
So well deserved 🙏🙌
@twooodley

What a great picture ! So well deserved 🙏🙌 @twooodley

Din Thomas, a 3rd degree black belt, talks about why he decided to promote Woodley to black belt.

“Tyron Woodley has been training Jiu-Jitsu for 12 years. He does wear the Gi and he runs a BJJ program in his academy.”