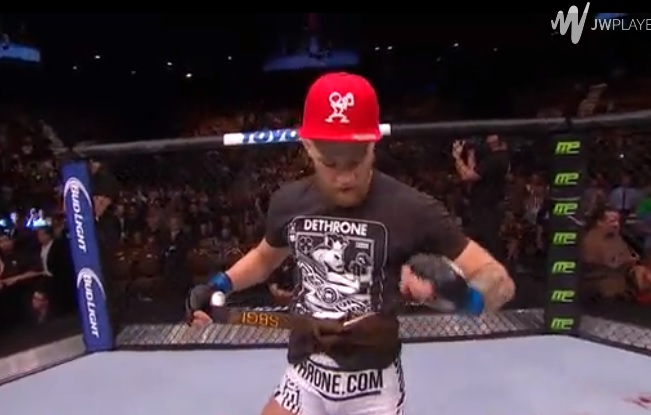 Conor McGregor predicted that he would stop Dustin Poirier in the first round and he did just that.
The Dublin based featherweight caught his opponent with a left hand on the back of the head inside the first two minutes and the fight was stopped after a barrage of shots.

McGregor said after the fight:

‘I don’t just knock them out, I pick the round.

‘What the other featherweights don’t understand is that it’s a whole other game when they get hit by me.
‘I felt really good. I tore my ligaments in my thumb four weeks ago which disrupted my training.
‘I wanted to put on a performance. I said I’d knock him out in the first round and I knocked him out in the first round.
‘You can call me Mystic Meg because I predict these things.The world title is next.’

McGregor was also promoted to BJJ brown belt by his instructor John Kavanagh. McGregor hasn’t showed much grappling in his past fights as he favors striking.

His instructor John Kavanagh runs the Straight Blast Gym Ireland and was the first Irish person to be awarded a black belt in BJJ. John fought in MMA to get a basic knowledge and experience of it before he moved into coaching, and where his true love lies in teaching. The fighters he coaches are among the top that compete in Irish MMA and are belt holders in the major Irish promotions such as Cage Contenders. He has trained notable fighters, such as Gunnar Nelson, Paul McVeigh, Cathal Pendred, Aisling Daly, Conor McGregor, Chris Fields and Owen Roddy. 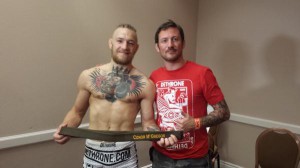 Check out Conor McGregor vs Kywan Gracie Behring at the European No Gi Open in 2012: