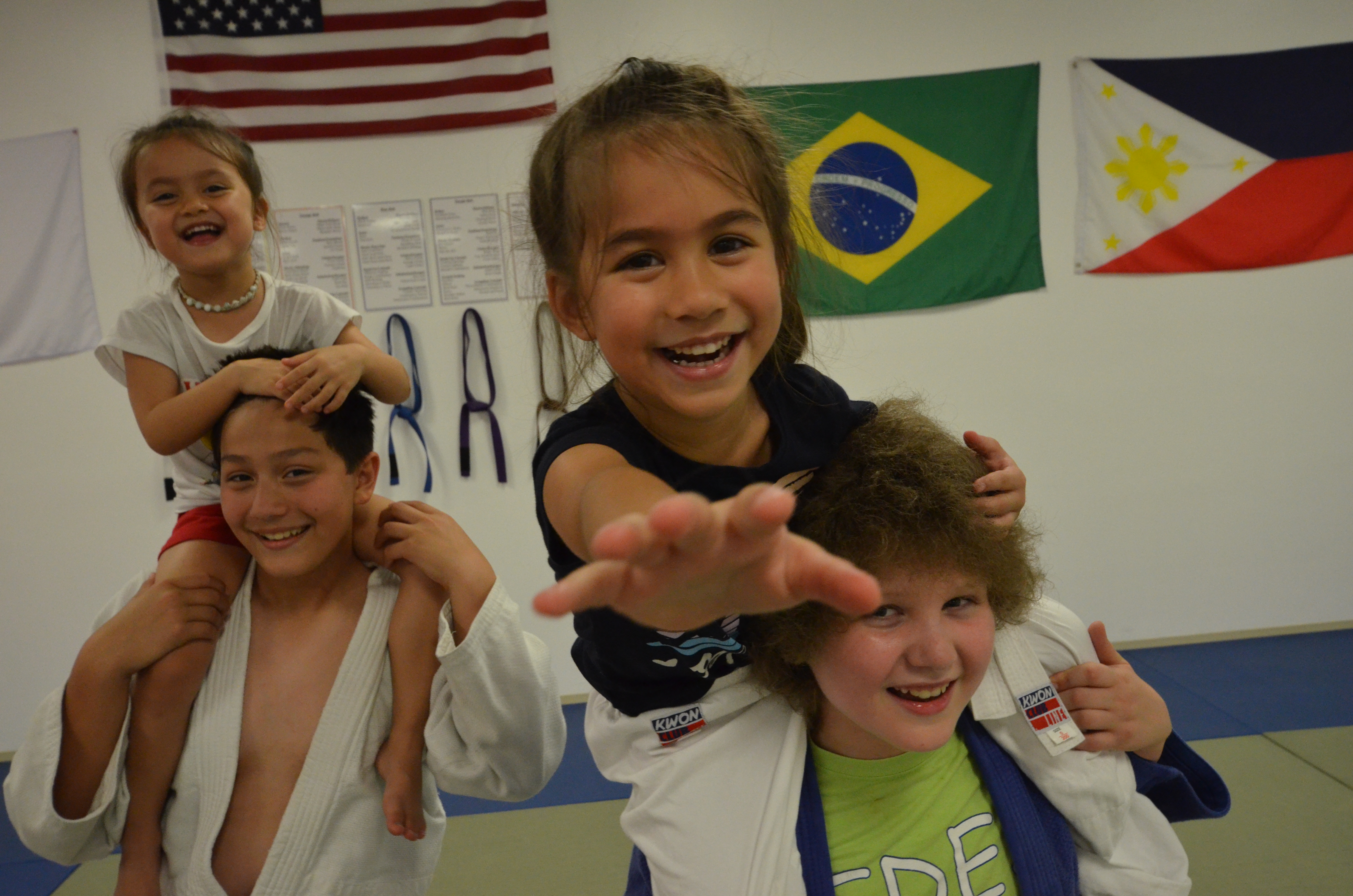 Grappling sports (Wrestling, Judo, BJJ, Sambo etc..) are great activities for kids, – much more so than team sports such as Basketball, Baseball, Soccer and Hockey. If you are contemplating signing up your child for some organized sports activity, here are some reasons why they will be a lot better off studying Grappling than playing in a Basketball league.

Safety- sports in general and combat sports in particular always carry a risk of injury. However, excluding striking makes for a much safer practice. Children learn how to break fall safely and the class takes place on a mat. Besides, grappling techniques are usually easier to stop / control mid-motion so that the use of force applied against your opponent can be graded, which might be difficult when punching or kicking. And, of course, the grappler’s mindset is focused on winning without unnecessarily hurting your opponent.

Complexity- most grappling arts involve a plethora of solutions a fighter can apply in a fight. The best example would be BJJ with virtually hundreds of different positions that evolve on a daily basis with practitioners coming up with solutions to their opponents’ attacks. It involves intelligence and spatial imagination and forces you to think, adapt, memorize and invent new techniques as you progress through the ranks.

Emotional and social development – all martial arts teach you similar core values such as respect for you instructor, training partners and opponents, discipline, perseverance, consistency, good sportsmanship and fair play. Children learn how to work in a group and how to compete in an individual sport. Most grappling sports offer a vast range of tournaments in which children and adolescents can participate. It has great emotional benefits because it teaches you how to deal with stress, how to overcome difficult situations and, if you lose, how not to give up at the first hurdle. Of course, not all kids have to and want to compete, but even if they don’t, martial arts give them more self-confidence which is extremally important in everyday life. The friends you make in the dojo are very likely to stay your friends for a long time.

Healthy lifestyle – obviously a lot depends on the kids’ environment outside the class and on the instructor. In general though, martial arts promote a healthy lifestyle: the importance of a good diet, no alcohol or drug abuse, spending free time in an active way. The more serious the kids get about training, the easier it is to convince them to quit eating junk food or spend less time playing video games. They are surrounded by other health-conscious people so they are more likely to follow the same path.

Self-defense- in spite of the never ending discussion about the effectiveness of each particular martial art in a real street fight I strongly believe that a trained child, be it in wrestling, judo, BJJ, or sambo, can easily defend themselves against a physically stronger or bigger opponent. Grappling has proven to be a really effective form of one-on-one combat (vide the UFC) and it has another important advantage compared to striking modalities: it allows for a de-escalation of a violent situation. It is especially important in a school environment, where a child might be forced to defend themselves but not necessarily break the aggressor’s nose, knock their teeth out or kick them in the groin. Grappling lets you submit your opponent showing them your superiority without them losing face. This helps to de-escalate the conflict and most probably avoid such problems in the future.

Overall physical development – there is no question about the athleticism of wrestlers or judokas which proves that grappling develops the body in a harmonious way. Grapplers are strong, agile, explosive and have good endurance. What is important to remember is that you don’t need to be athletic to start training, the physical development is in a way a “by-product” of working out. Skinny kids gain muscle weight, overweight kids lose unnecessary kilograms. Grappling works the whole body and makes it strong and resistant.

Fun – grappling is fun, at least for most children. Boys (but not only) love to wrestle and roll around on the mat. A kids’ class involves a lot of fun and games that children love to participate in. Many games can then be reproduced at home with a parent thus strengthening the enthusiasm for the sport.

So which grappling art should you choose for your child?

Well, that is a tough question and myself being a BJJ practitioner and instructor makes me a little biased. All the grappling arts have advantages and I will not even attempt to list them all. Here are the most important ones:

Wrestling: great for general fitness; as an Olympic sport gives you plenty of possibilities of competing and potentially a full time career in sports; a good base for MMA in the future.

Judo: besides the above mentioned, judo involves some Japanese tradition (outfit, bowing, belts) which is often attractive, especially for kids.

BJJ: very effective in a real fight, contains elements of self-defense, an important component of MMA

Sambo: combines techniques from freestyle wrestling and judo and has the same benefits as these arts

Current UFC welterweight and former One FC champion Ben Askren commented on football/soccer and he was not impressed by the attitude of some soccer players:

“It was really the first time I watched soccer all year. I was really appalled when I am seeing all these guys falling on the ground, rolling around, crying. And then you know the worst part about it is, they show the instant replay and you can tell – most of these guys, they don’t even get hit, they’re faking it.”

“There’s no honor in faking an injury. There is no integrity because you are lying about it. And there’s no toughness because you are in front of millions of people, and you’re rolling around on the field, crying – CRYING – about a fake injury that never happened.”

“Listen folks, if you want your son to grow up to be a man, don’t have him run around on a field kicking a ball, get him wrestling.”