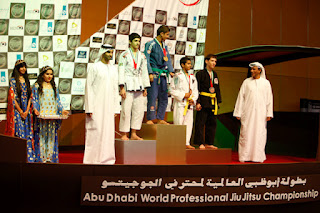 The day 1 of the 2012 WPJJ was totaly dedicated to children’s division.

The future stars of Jiu-Jitsu in the Arab region took control of the six mats set at the Abu Dhabi National Exhibition Center.

Kids from 10 to 17 years old displayed a lot of heart and technique to amaze the crwod.

And among attendance there was someone very special.

UAE’s Crown Prince Sheik Mohammed bin Zayed Al Nahyan paid a visit to the event and was pleased with what he saw.

One kid in particular attracted the attention of His Highness.

Hamad Essa, 15, won his category at the orange belt.

What made Essa’s accomplishment special is that he has a disability in his legs.

BLACK BELT BRACKETS ARE OUT. MORE JIU-JITSU TO COME

You can find them at our BJJ Eastern Europe page on Facebook.

Rodolfo Vieira and Bernardo Faria are on the same side of the bracket and would meet in one of the semifinals.

Andre Galvão and Xande Ribeiro would meet in the other semifinal.

At the weight categories, some good encounters as well.

70kg: Isaque Paiva and Raphael dos Santos should have a tuff route to the final.

76kg: Lucas Lepri and Leandro Lo should be in one semifinal while Davi Ramos or Roberto Satoshi should face JT Torres in the other semi.

82kg: Lucas Leite and Vitor Bonfim should be in one semi while Claudio Calasans Jr is the favorite to be in the final on the other side.

94kg: Rodolfo Vieira and Roberto Alencar should be in the final.

100kg: Bernardo Faria to face Alexandre de Souza on one semi and Xande Ribeiro should face Antônio Barbosa on the other.

+100kg: Antônio Braga Neto and Marcus Almeida are the favorites to be in the final.