Rodolfo Vieira: “Roger is the one who has three world absolute titles, so I want to win four!” 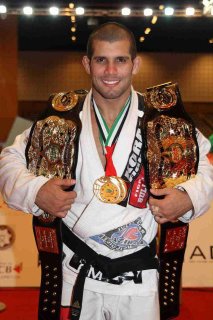 Rodolfo Vieira did it again! The action at the World Professional Jiu-Jitsu Championship has come to a close in Abu Dhabi. Rodolfo Vieira took front and center as the big standout of the event, for the second year in a row winning his weight and the open weight classes.
However 2011 was a spectacular year for Rodolfo Vieira, the phenomenon of Jiu-Jitsu who won absolute & weight at the Worlds, Pan American and now Abu Dhabi Pro 2012. To start the year off right in 2012, the black belt GFTeam repeated the feat in the Europeans, which happened in late February, in Portugal. He didn’t defend his title at the Pan Ams, held two weeks ago in Irvine, California. Rodolfo decided to focus on the Abu Dhabi Pro World and IBJJF Worlds and is looking to overcome Roger Gracie’s record of 3 absolute wins at the IBJJF Worlds. “Roger is the one who has three world absolute titles, so I want to win four!” said Rodolfo, in the interview below. The greatest name in Jiu-Jitsu today talks about closing out divisons with teamates, revealed the will of a rematch with Andre Galvao (who beat him in 2009).
You are the champion of absolute & weight and the Pan Ams 2011. Why did you stay out this year?
Unfortunately, I stayed out. I will fight only Abu Dhabi (interview happened a bit before the World Pro). I thought it would be ok to do both, and then I talked to Julio my trainer and I thought it would be better to just focus on the Abu Dhabi Pro.
How are the trainings in GFTeam?
I’m training a lot, here in Rio. We are maybe going to do, after Abu Dhabi, a camp in Colorado. I was talking about this with Julio, we just do not know the exact date yet. But preparations for the World Abu Dhabi is being done right here and at the right pace.
Are the IBJJf Worlds in your plans?
I’m doing the IBJJF Worlds. I’ll do the heavyweight division and absolute. It’s only after I win three more Worlds that I can afford to stay out (laughs).
Everyone wants to see a fight with you and Roger. He even said he knows the formula to stop you. do you have the antidote to defeat Roger?
Man, did he say that he had the formula to beat me? I have no antidote. I can’t say those kind of things. So I better be quiet and show what I have to show there on the mat. I’m training hard, and I’m confident that I’m going to win against him or anyone else who appears in front of me.
How is your shoulder injury? Have you recovered?
No, man. I tried. I did physical therapy, and my shoulder was better than before. I Always have a small muscle tear. Ialways have small injuries like on the hand, fingers, knee … But nothing that really bothers me in training. It’s normal …
Another athlete who may cross your path this year is Andre Galvao, who has defeated you in no gi in 2009. How much do you want this rematch with him? (Interview happened before the World Pro)
Wow, that defeat is still mentioned up to today.I don’t think about it. If we have to fight, we’ll fight. I’m sure will be a great fight because Andrew has a great Jiu-Jitsu. I like watching him fight too I’ve always liked. I know that he is strong, but we must not forget also about Xande, Romulo Barral, who were away and returned with a vengeance and disturb the new generation of guys (laughs). They give more luster to Jiu-Jitsu. They couldn’t stop, I’m happy about their return.
Where do you want to go with Jiu-Jitsu? Do you want to migrate to MMA?
Man, I am motivated as hell. Every day, I pray to God always for me to never lose motivation and focus on training. Only God knows when I’ll leave Jiu-Jitsu. I intend, to win three more titles, go after Roger’s record in these championships. He is the one that has three, so I want to win four. Then yes, I’ve been wanting to debut in MMA. Let’s see. Now is too early.
Rafael Mendes and Bruno Frazatto declared that Atos were not going to close categories, seeking professionalism. What do you think about the closure of categories?
Brother fighting brother is normal in Judo, but Jiu-Jitsu, is a totally different thing. It’s another philosophy. We’re not used to that and never have been. I am not in favor. I could not fight with my friends. If we come to an end of a major championship, that if we are lucky enough to get the two together, I would give the title or I would take it. I do not know. We’d make a deal, talk to Julio. Julio makes you super comfortable to resolve this.
But you live from this sport, do you not think you should put Jiu-Jitsu in the foreground?
I think a title cannot be compared with some friend of mine. I think friendship is much more important than that. I am not in favor of that. Also I am not against if you are. Each has his beliefs and mine is this one.
Marcelo Garcia is a 9-time World Champion and known for getting to the back and finishing with the rear naked choke, even against much bigger opponents. This four-part system covers taking the back, jumping back takes, maintaining back control, and finishing from the back. Learn Marcelo Gracia's famous Back Attack System. USE PROMO CODE "BJJEE TO GET 10% OFF.