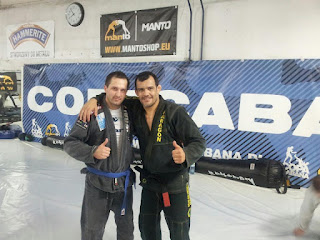 Our friends at grapplerinfo.pl recently had an interview with Ricardo “Franjinha” Miller during his seminar at the Copacobana academy in Warsaw. Franjinha is one of the best Brazilian Jiu Jitsu (BJJ) coaches in the business. This Brazilian born black belt is the head instructor of the renowned Paragon BJJ academy in the United States having graduated some of the top athletes of today such as Jeff Glover and Bill Cooper amongst many others

1.What impressions did you have of Poland? How do you like our country? Culture, climate? Have you tried any traditional Polish dishes?

Man I love the country and the people. I had a great time when I was there and my hosts Kuba and Michal were great with me.
I was lucky to get a good weather without snow, so I could enjoy more the outside of the city. The food was good too.

2. You gave a seminar in Warsaw’s Copacabana club. During those few days what aspects of BJJ did you focus on? What techniques did you teach?

Yes, I got invited to come to Copacabana and I was surprised with the level of the guys and the vibe in the academy. I really felt right at home there. I had a great time and I focussed on passes and subs like shaolin chokes and ambars. Also, I let people choose some days the topic we would be covering. Something like a question and answers type of class.

3. Poland is one of the best BJJ countries in Europe. How would you rate the level of BJJ in our country by looking at the training in Copacabana? 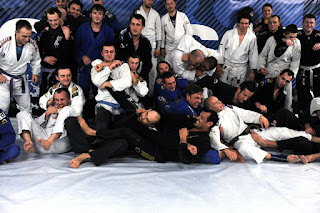 As a mention before, I was surprised by the level of the students. Especially because I didn’t see a daily Black Belt teaching the classes. But for sure the higer belts guys are doing a great job. I will not be surprised if we see some good names soon in the higher ranks in US or other big tournaments from Poland. It is just nice to see the Jiu-Jitsu level getting higher anywhere in the World. I was in sweden too and there people are getting very serius too.

4. Your best-known students include Jeff Glover and Bill Cooper, who are very successful in international BJJ competitions. And what about the rest of your students? In the near future can we expect such talents like Jeff or Bill?

Luckly and with a lot work we have been producing good names to represent our Gym and our sport. Our goal is not make just well know fighters, but make people love our martial art around the World. Their success we believe is just because they do one thing that they love to do. So for sure you can expect some big names soon from your gym.

5. Your first coach was Romero Jacare. What was he like as a trainer? What did you learn from him? What values did he teach you?

He taught me to be a nice person in and out of the mat. Also, the way he teaches you learn how to love the Jiu-Jitsu. One of the best lessons that he taught me and others was to use the Jiu Jitsu to make a better World. I learned it and I use it today and I try to pass it to my students. Jiu-Jitsu can help a lot people in diferent ways in their lives.

6. Why did you not want to set up in the U.S. subsidiaries of Alliance Team, and have founded your academy Paragon BJJ instead?

When I moved to the US I was the first Alliance guy to come and I wasn’t in the best terms back them with one of the founders, so because of that I wasn’t able to carry the name back them. Without this oportunity, I saw myself forced to find a new name and logo to carry in my gym. But today things are square up and we all have a good relationship and respect one each other.

7-Recently there has been a trend in the world of BJJ. Namely, many of the leading BJJ players move out from Brazil to the U.S. and set up their academies there. Why do you think players like Michael Langhi, Cobrinha and many others who decided to be their own bosses?

In this World you will always have people that like to be the boss and people that like to work for a company. The good thing about the Jiu-Jitsu life style is that you can be your own boss anywhere you go. I think a lot of us want to be in that position .

8. How many black belts have you promotted so far in your career? What criteria do you use when promoting somebody?

I have promoted so far 26 black Belts and for each one I need to take in consideration diferent things when I promoted them. I can not be expected to be able to produce 26 Glovers or Cooper guys, but I make sure they have a solid game and knowlodge to pass to others when they achieve this level.

9- As an experienced trainer, do you have any advice for BJJ practitiones who train hard every day, but don’t do so well in competitions?

Drills, drills and drills. Going over and over of the moves is very important. Everyone just want to train, but they forget to take care of their conditioning and skills on the side.
One line that I always use to my students is: “Repetition is the mother of the skills.”

10. Which athlete has made the biggest impression on you and deserves to be called the best player in the world of Jiu-Jitsu in 2011?

For sure in BJJ I say Rodolfo Vieira. In No-Gi I say Marcelo or Dean Lister and MMA Anderson Silva.

11.If you also want to add something from yourself for our readers, please do!

First of all, Thank you for the oportunity to write to you guys. It is always a pleasure. Second, I just want to thank God for giving me the skills and health.
Also, thanks to my wife, family, friends , Students and all the people that help me to achieved my goals. Thanks!!!