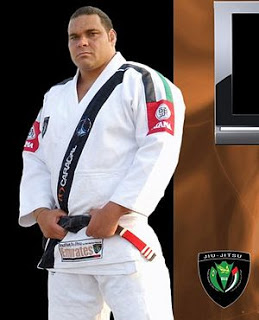 “Carlao” is a 3-time World Brazilian Jiu-Jitsu heavyweight champion. Carlos’s Jiu-Jitsu career started in 1993 at the famous Carlson Gracie Academy in Copacabana, Rio de Janeiro, under the supervision of Marcelo Alonso and Marcelo Saporito. He trained under Carlson Gracie until receiving his brown belt. Currently Carlos is the ex-head coach of Emirates Jiu-Jitsu, as he left the Emirates in 2011 and now opened his own training center in the USA. The stated goal of Emirates Jiu-Jitsu is to raise awareness of Brazilian Jiu-Jitsu and make the United Arab Emirates the premier venue for this sport in the world, as well as create a community of BJJ athletes that train and compete in the UAE. He was also the President of the Federation International of Jiu-Jitsu Association (FIJJA) that he established in 2009. FIJJA aims at generating financial return to FIJJA and its competing athletes by making jiu-jitsu a profitable business. Carlos implemented BJJ in the local army training, as well as making Jiu Jitsu a mandatory subject in public schools. The Abu Dhabi Jiu-Jitsu Schools initiative, named “School-Jitsu”, began in 2008. School-Jitsu and aimed to discover future talent in 14 schools for pupils in grades 6 and 7 (ages 9 to 13). The program has since expanded to 42 government schools, with 81 Brazilian coaches brought in as instructors.[6] The plan is for up to 500 schools to be participating in the School-Jitsu program by 2015. The project was set up by special request of HH Sheikh Mohammad bin Zayed Al Nahyan to Carlos Santos, who is the managing director of the School-Jitsu Project.

The original interview was conducted by our friends at Grapplerinfo


Carlao, how did you become a teacher in the United Arab Emirates?

In 2001 the club has an agreement with ADCC BTT – Brazilian Top Team, every month to send one coach to lead classes. I came in January 2002 and was there 4 weeks. In August 2002 I returned again for a month but I stayed for 8 years.

In Europe there is a misconception that Muslim countries such as United Arab Emirates, are very restrictive. You live and teach there. When you arrived from Brazil, was the shift difficult?


Yes, the culture is completely different, but the Arabs are just like Brazilians and besides, they love Brazilians. Of course about football and when you say that you are from Brazil it opens all doors. The whole Arab world loves football.
At the beginning I was alone in the Emirates and it was not easy, but I did have the opportunity to do something good with Jiu Jitsu and create a great team. Now, you see, remaining in the UAE and doing great things with Jiu Jitsu, both here and in the world, was a good decision.

Is Jiu Jitsu popular among women in the UAE, or rather, only the men attend the training?


99% are male, but things began to change years ago when I started Jiu Jitsu classes in  all girl’s schools. Of course, to popularize BJJ  to women in the UAE is a hard job, but it is not impossible.

Do you teach only in Abu Dhabi or in other places?


At the moment only in Abu Dhabi, because there are many places to teach. 42 public schools, military, royal guard, police and club ADCC.

How has Jiu Jitsu in the UAE  evolved since you began to teach there to this day?


When I started teaching 8 years ago, our group consisted of eight people. At the present the UAE has more than 20,000 people who train BJJ. Moreover, in Abu Dhabi there are 81 trainers with black belts who live here and teach.

From what I understand, the authorities in the UAE are very helpful and supportive. Jiu-Jitsu is now part of the school and military training. What other plans do you have to Jiu Jitsu in the UAE?


The whole government is heavily involved in the creation of BJJ as a great sport, both in the UAE and around the world.

As the ex President of FIJJA, can you tell if you see the FIJJA overtaking the IBJJF? How do you see the future FIJJA for 10 years?

The tournament Abu Dhabi World Pro is becoming increasingly popular. Some even say that it may soon become more prestigious than the IBJJF Worlds. What is your opinion on this?


I agree, within the next two years the World Pro BJJ will become the  biggest BJJ event in the world and will be as strong as other sporting events.

What aspects of Jiu Jitsu training, do you consider to be the most important and what you specifically notes in the classroom?


Exercise the basics and a lot of repetition. Moreover, respect the coach .

Based on your observation of the European Championships, the World Pro, and perhaps other events, please tell me What is your impression about the level of European players?


The level increases a lot. However, you still need time to compete with the Americans. According to me, after Brazil comes America and then Europe along with Japan. I also think that in order for BJJ to grow in  Europe, they need larger events. At present, the only one is the European Championships in Portugal, but I hope there will be more of them.

What advice would you give to people who are just beginning their adventure with Jiu Jitsu?

You have to train and develop a tight game  It is important that often compete in competitions because you can see your mistakes much faster to improve your Jiu Jitsu.
Thank you for the interview and I wish you continued success.