Head coach of 2012 European Juvenile team champions, Željko Vuković talks about how he built his successful youth program from the ground up

1. Hi Zeljko, can you please introduce yourself to our readers?

Hi guys, I’m from Đakovo, Croatia. I started training training traditional Jiu-Jitsu and Judo 1987, while I was at special forces military service in ex Yugoslavia (Niš). I first heard of Brazilian Jiu-Jitsu  a few years back, when Mirko Filipović lost to Minotauro by armbar. That was quite a shock for almost everybody in Croatia because our fighter lost on the ground in a unfamiliar way for us.

The more I began to follow Brazilian fighters, in the Pride organization, the more I became interested at Brazilian Jiu-Jitsu, so in 2006. I finaly decided to find people who are actually training Jiu-Jitsu here in Croatia. From time to time, my ten year old son Denny and me started to go train with of a friend of mine, Daniel Rušanac and his friend Domagoj Pavin who was alreeady a blue belt at the nearby town Donji Miholjac.Considering that It was hard for us to travel all the time…we started to watch BJJ techniques on YouTube and than tried to repeat it on the living room floor…every day.

Soon, at the end of 2006, I founded Brazilian Jiu-Jitsu Club „Triangle“ under Edson Carvalho BJJ Academy. Even then, I was looking at BJJ in a different way than almost everybody else who were training BJJ here in Croatia…I wanted to make BJJ a popular sport among kids, to be the first person who would introduce kids to BJJ. And I did it. My goal wasn’t to get black belt as soon as possible..My goal was to have the best BJJ kids, not only in Croatia but also in Europe. And I did that too…in only four years we’ve been training with kids at our club. Having good kids is precondition for having good adults.

Therefore, I’m not ashamed to say that at the begining of my career my faithful “BJJ teacher” was YouTube. Today our club is a member of Rio Grappling Club, under prof. Roberto Atalla and we are proud to fight under that name.

2. Please tell us about your academy Rio Grappling Club Croatia (Triangle Djakovo) and how you became the most successful youth team in Europe in 2012.

At the beggining of 2011 we contacted Roberto Atalla, legendary BJJ instructor and former World Champion and one of the finest Jiu-Jitsu black belts teaching in Europe today. The Brazilian Jiu-Jitsu club “Triangle” joined Rio Grappling Club, and became a representative of his Jiu-Jitsu academy in Croatia.
On the last European Jiu-Jitsu Championship (2011), our BJJ club „Triangle“ with it’s two fighters already won 4 medals ( 1 bronze and 3 gold medals) and became the second best BJJ junior team in Europe. After we started to cooperate with our instrustor Atalla, this year we had 5 fighters who won 8 medals (2 golds and 6 silvers) and climb to the throne of European BJJ Championship, as the best BJJ juvenile team, leaving behind famous teams as Gracie Barra and Renzo Gracie.

For that success I give credit to Roberto Atalla, whose advices were very helpful, and I also give credit to the extraordinary talent of my figters. However, they were very successful in World Grappling Championship, so we have 5 world champions and 8 vice-champions in grappling.

3. Not many BJJ academies in Europe have a strong youth program, yet yours has succeeded in gathering a large number of kids to train and excel in BJJ. How did you succeed in building such a strong youth team in a sport like BJJ which is still not mainstream?

The beginings were very hard because I knew nothing about BJJ…I didn’t know how to do techniques properly and some were dangerous for kids…those were my biggest problems…then, lack of space and conditions for training…in the first two years we had trainings only on Saturdays and Sundays from 7.30 to 9.00 AM….the gym was cold and we didn’t have proper mats, it was very slippery…so there were a lot of knee and elbow injuries…

But despite all those problems I didn’t give up to attract kids to this sport. I visited all elementary schools in town and held some presentations with my son. That was the fuse for real BJJ explosion in Đakovo. In only few days we’ve gathered about 50 kids, and in a few months our club had over 100 members, so we had some troubles with space for training.

4. We all know how much kids can change once they become teenagers. How do you manage to keep your kids focused on BJJ through this unstable period of their lives?

I saw that if I want to keep children at the club, I have to do a few smart moves. I have to bring myself on their level and not act as “sensei“, but be their friend who is explaing everything to them on interesting and approachable way. Younger kids often lose focus as the training is closer to the end if you are doing the same techniques over and over again. I’ve brought play and fun into the training and sweets at the end of the training, so they’ve been eagerly waiting for the end of the traing and also eagerly waiting the next training. I’ve become like a second father to them and I love them. On some occasions I had to be strict with them, but at the same moment fair.  I punish disobedience with pushups but I don’t kick them out of the training or I don’t mock them. Smoking, alcohol and streetfights are forbidden and only if they did that (even in their free time) they were not allowed to come to the training and could be banned from the club. We’ve shared sadness and joy…sometimes I was angry at them because of their “begginers“ mistakes in a BJJ fight..I always keep in mind that they are kids and that they are allowed to make mistakes, so the anger was soon replaced by jokes.

Simply, we became inseparable friends, a real team who is training something with love five times a week…went on competitions where we were winning, losing, being happy or sad together. Now competitions are one of the main motives why they are still in this sport. There aren’t many competitions so going to every BJJ or grappling competition is true experience and joy to them and they live to go to the competitions.

5. What is your approach to teaching younger kids some more dangerous submission techniques like chokes, armlocks etc? Is there a age limit for some techniques? 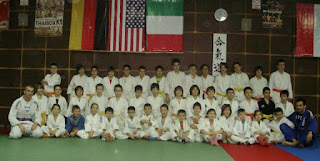 In BJJ, limitation of some submission techniques are very rigorous, so some techniques (especially on legs) are forbidden till the brown belt…while in grappling (where there is no belt divisions), kids who are 16 years old are allowed to do every possible submission techniques. Regarding the fact that my kids are going on both Jiu–Jitsu and grappling competitions, they are training all submission techniques when they turn 10 years but only under the coach’s careful supervision. In grappling competitions rererees are stopping the fight on time, so that practically there is no injuries. When my kids get to brown belt level, knee bars will not be something they meet for the first time. Those will be techniques with whom they won fights many times before.

Therefore, we didn’t have serious injuries, and that results from a “soft“ approach to training and sparring and with accent on rolling. Unlike some clubs, where you can’t find a senior who doesn’t have “Cauliflower”  ear, in our club that kind of injury still hadn’t occured.

6. With your students starting BJJ so young, I can already imagine their level when they reach adulthood. Tell us which are the names we should look out for in the future?

7. Is there any advice you can give me regarding getting my future son or daughter to start training BJJ?(I don’t want to force them)?

What I can recomend from personal experience is that at the begining it is the best to bring your child to the trainings just as spectator…especially to watch other kids that are already training. That is the best thing you can do. And in addition to that, if your kid can watch you how you train other kids, as a coach, or watch you actually training BJJ, that would be the winning combination. The thing is that kids want to imitate everything you do, even your attitude towards training a martial arts.

Once your kid has started to train, the role of parent becomes more significant. Actually the parent is the one who must know how to keep the kid in this sport… to know how to give him or her motivation to keep training. That’s because kids often lose motive and interest, about everything they do at that age, and there is a large number of reasons for that (problems at school, playfulness, soccer games, movies or some other shows on TV at the same time as training, falling in love, etc.). Regarding all those things, motivation is very important, although the parent sometimes must be strict and not allow that kid to not take training seriously. And kid has to know all that. The worst attitude parent can have is- “if he wants to train that’s OK, and if he doesn’t want to go-I don’t want to make him go“. That isn’t the winning combination, because if you ask kids sometimes they even wouldn’t want to go to school. At that age kids don’t have the best judgement about things that are and that aren’t good for them, so it is necessary for the kid to have “a navigator“, and that is parent’s primary role.

My children have only two obligations, to learn well and be good at school and to train, and the result of that approach is that 3 from 4 of mine children are training BJJ (the older daughter is also training Muay Thai) and all 3 of them are state champions and also good students at school. Now I’m waiting for my youngest son to turn 6 years so I can introduce him with BJJ also.

Zeljko, many thanks and best of luck to you and your team in 2012!

Thank you also, because you gave me the chance to present my BJJ Club on your web-site…See you on some of the following BJJ competitions!