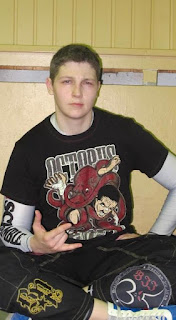 1.Hi Lena can you please introduce yourself to our readers?

Konichiwa everybody!  My name is Lena “Kimatsu” Zenkevitch. I live and train in Vologda, Russia, together with my team BJJ’35. We are affiliated with the Strela Alliance Sport Club. I also train in Moscow and St. Petersburg a lot together with my friends from other Alliance Russia academies. I started training BJJ in March 2010. My main achievements currently are: bronze medalist of Russian Students’ Judo Championship in 2004, few-times Sambo and Judo champion of North-West Russia, golden medalist of Moscow BJJ Open and Abu Dhabi WPJJC Moscow Trials. And, just recently, Abu Dhabi WPJJC’2012 open weight gold and +72kg silver medalist.

2.How did you start training BJJ?

In 2010 I met my first BJJ instructor via a social media website. It was Ralph Gracie’s purple belt Kostya Skachkov, No-Gi World Champion and Gi World Champion in blue belts division. He taught me the basics of BJJ and made it possible for me to start training here in Vologda. Kostya is an amazing BJJ player; his jiu jitsu is also very methodical. He helped me get, after six months of training, my blue belt from Master Tony Souza, who also had a great influence on my teaching.
I would like to say thanks to these great warriors and masters for sharing their knowledge with me. OSS!!!

3.Tell us a bit more about the BJJ scene in Russia and your BJJ academy Alliance Russia.

BJJ is extensively developing in Russia. We have only one black belt here; it is Leonid Gatovskiy from Gracie Barra Moscow. But there appear more affiliates; Alliance is one of them, of course. There are also some other BJJ practitioners in Chechnya, and some independent Russian teams: Christian Cestaro Team, Dragon and Top Team Dagestan (By the way: hello to ya, people!).
There are some very solid instructors in Strela Alliance SC Moscow: both Brazilian, Rodrigo Cabral, Guga Campos (OSS!), and Russian, Dmitry Selivakhin.
We have two gyms here in Vologda. One of them is Police Department’s Gym and another one in the Gym of the Optical-Mechanical Plant. We have 4 or 5 BJJ classes per week and some weightlifting and cardio training in addition.
By the way, I am a police officer.

Preparing to WPJJC’2012 became my primary mission after I won Abu Dhabi Moscow Trials. First of all it was sleeping and feeding regime, including protein, creatine and vitamins.
I also had a lot of guest training sessions in Moscow and St. Petersburg, seminars of Jeff Monson and Guga Campos. I spent a lot of time on the mats with my white belts, totally tearing in pieces their gis and bodies :).
During my training I paid great attention to strength & conditioning, doing basic exercises: bench press-pull down-running.
I trained a lot my armlock, mount, sidecontrol and closed guard.
I highly appreciate my training partners, who borne my bad mood and tough rolling before competitions.

My priority for now is to have some rest and restore. Then I would love to compete in the US. Also I will take part in WPJJC Trials, of course, and maybe in Russian ADCC Championship.

No, I have not competed in MMA yet, but we are training no-gi and striking, so maybe one day I will try it myself.

7. Thanks for taking the time Lena, all, the best.

My success and victories are dedicated to my mother and father. They always support me .
I would also like to thank my sponsors, BrutalTshirt for their friendship and support. They made for me a totally unique awesome Japanese-style Kimatsu Gi Patch. I love it!
Also I would like to thank my opponents, Luanna Muniz, Tereza de Souza, Iris Batista, Katrien Verheeke, and to my rolling partners, Hana Fisher and Eun Ji Kim (my nice room neighbor).
And, of course, I thank Karma for making it possible to meet my BJJ idols – Satoshi and Marcus Souza, Kyra Gracie, Michelle Nicolini, Gabi Garcia, Braulio Estima