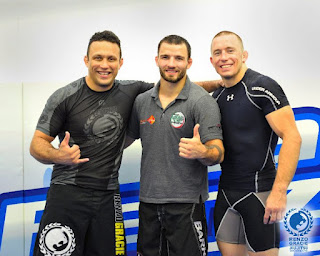 Hi! My name is Leonid Gatovskiy. I’m 31 years old and I’ve devoted the biggest part of them to practicing martial arts, including boxing, Thai-boxing, traditional Jiu-Jitsu, and freestyle wrestling. I competed a lot along the way, achieved some success, but there’s still a long way to go. I keep honing my skills in BJJ and other martial arts.

2. Can you please explain to us how you discovered BJJ and how you became the first Russian BJJ Black Belt?

I got to know BJJ first in 2002 at BJJ and ADCC Submission Grappling championship in Poland and started practicing BJJ actively in 2004. The first BJJ club I visited was Bastion Tychy in Poland. Sławomir Szamota, the head coach, welcomed me warmly. He answered the questions I had and gave recommendations on learning BJJ process. Sławomir suggested setting up Gracie Barra Moscow branch. He assisted me in mastering BJJ. I trained BJJ a lot, attended seminars and training camps, coached BJJ, and progressed to a brown

belt eventually. In 2008 I was promoted to a brown belt at annual Gracie Barra Poland Summer Camp led by Sławomir and BJJ master Sergio Benini (black belt from Vinicius ‘Draculino’ Magalhães).
In three years, in summer 2011, I took a trip to the US to train and improve my BJJ there. I spent a month in the US training in a number of BJJ academies and clubs. Gracie Barra Carlos Gracie Irvine and Renzo Gracie Academy New York were my main hosts. During one of the trainings in Renzo Gracie Academy (Roger Gracie, George St. Pierre, Romulo Barral, and John Danaher were present) Renzo took a black belt, beat me against my back with it, then tied it against my waist, and said that Russia got its first BJJ black belt. Everyone congratulated me on the promotion and the training went on. I rolled with Romulo Barral then.
I’d like to express my appreciation to Luca Attalla, a great BJJ master and nice fellow, who stayed in touch with me and helped me a lot during my trip to US. Special thanks to him for introducing me to Renzo Gracie!

Our sport club Lion is a base for Gracie Barra Moscow Academy. The club is the first and largest center of up-to-date martial arts in Russia that develops BJJ, Submission Grappling, Thai-boxing, and MMA. A lot of kids train at our club. We held BJJ, Judo, and Thai-boxing tournaments and certifications for kids.
We’re happy to be a part of the large BJJ community across the world and proud to represent it and Gracie Barra Academy, one of the world’s largest BJJ academies, here in Russia!

3. How do you explain that a country as big as Russia and with such a strong martial arts background, has started BJJ so late compared to the rest of the world? Also how popular is BJJ in Russia at the moment, and how do you see BJJ developing in Russia in the future?

Martial arts and combat sports are very popular in Russia. There’s traditionally strong regard to
boxing, judo, SAMBO, freestyle and Greco-Roman wrestling. These sports get administrative and finance support from the government. Martial arts have been evolving. New combat sports have been embraced and spread in Russia. They are often being referred to as modern martial arts, as opposed to traditional martial arts that are mostly Olympic sports. These modern martial arts include BJJ, Submission Grappling, Thai-boxing, and MMA. BJJ evangelists definitely lack support from federal and local authorities, but they have been making headway still. BJJ and MMA have started gaining more momentum in Russia. Number of clubs and BJJ practitioners has been increasing steadily. Notable BJJ masters from around the world come to clubs and academies in Moscow and other cities to deliver seminars and to coach, making solid contribution to the promotion of BJJ in Russia.

4. Now that you have established your BJJ academy and with the first Brazilian instructors coming to teach in Russia, can we expect some Russian champions in international competitions very soon?

5. Do you still compete or are you focusing more on teaching? Also what are your plans for 2012 in terms of BJJ and your academy?

I still compete. It’s getting harder to find time to train full blast and carry out all the plans in full, but I have a dream of getting to the top at ADCC 2013 World Championship.

I would like to end this interview with a quote: “The road will rise to meet the one who walks on it.”