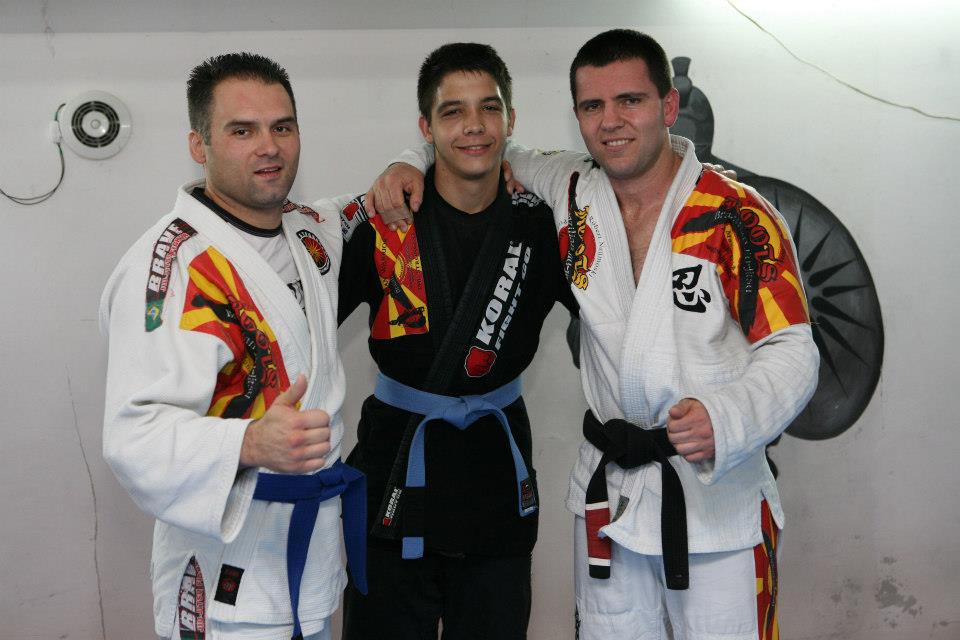 1.Hi Robert, can you please introduce yourself to the BJJ community of Eastern Europe?

Name: Robert Naumoski, 38 years old and live in between Australia and Macedonia, I was born in Australia where my parents had emigrated from Macedonia. I got graded to Black belt in 2010 by Prof Paulo Guimaraes and Prof Jorge Pereira. I am head instructor for Roots Macedonia and Roots Bexley (in Australia). I teach and train at these locations as well as in Roots brown belts and above classes. In competitions I have been 5 times N.S.W. Champion, 3 times Australian champion and 4 times Pan Pacific champion.

I started training martial arts at the age of 12 and at 23 got my first taste of Jiu Jitsu. In our local weights gym the owner at the time was a blue belt and asked me if I wanted to come down stairs and train with him, after some discussion I went. I could not believe how easily he controlled me and tapped me out, at the time i weighed 110kg and he was 40yrs old and weighed 75kg, then and there I was hooked. In 1999 Paulo Guimaraes came to Australia after one training session with him we knew I found my home in Jiu Jitsu, so we all went to train with Paulo. Paulo at the time was the first Brazilian Jiu Jitsu black belt to emigrate from Brazil to Australia, and first black belt in Sydney.

3. Please tell us more about academy in Australia.

In Australia Roots Bexley is one of the Academies of Roots Jiu Jitsu. In Bexley we have training for kids as young as 4yrs old to our oldest member who is 60. We have had really good success in competitions where our athletes have become state, national and international champions. For Australia we have the first World Professional Jiu Jitsu champion in gi Steffen Krieg and the first in no gi Brian Falzon. Also this year we have had Australias first kids champions with Soloman Blanch and Gilgamesh Blanch winning gold in kids world titles in America. In all Roots academies our main goal is to bring the best out of our students and to show them the benefits of healthy life that comes about through training Jiu Jitsu.

4. How and why did you decide to open the Roots BJJ academy in Skopje, Macedonia? Have you planned to open other academies in the region or in the rest of Europe?

Being a Australian/Macedonian and regulary travelling to Macedonia I was approached by one of my blue belts that Macedonia was interested in training Jiu Jitsu. There I met Ivica Aleksovski and as they say the rest is history. We are open to the possibility to open other academies, but for that to happen you would have to have the correct attitude and personality in order to be a part of our family. This would be the case for any respectable Jiu Jitsu school a guess, we spend allot of time and many years in training to learn what we do. So if the correct person comes along there is a possibility.

5. How do you see BJJ growing in Macedonia over the next few years?

In Roots Macedonia we have trained white belts that have had great success in competitions around the region. The enthusiasm here is electric and I am proud to say that just this week we have graduated a fair amount of them to blue belts. If it continues as it has been going I think the bjj community will be looking forward to watching our athletes compete. In Macedonia it has just relatively started and we need the competitions from our neighbours to develop and evolve.

6.How is the BJJ scene in Australia?

In Australia we have a large scene in bjj, where competitions attract a large number of competitors. Due to the warm weather and great surfing conditions a large number of black belts have come to Australia, where Jiu Jitsu is the largest growing martial art in the country. This has been also the result of the growing interest in MMA where we know have the series Ultimate Fighter, Australia V Englend.

7. Growing up in Australia, how did you manage to stay close to your Macedonian roots?

In Australia we are a multicultural society, Australia itself is relatively young being only 200 years old. So unless your Aboriginal every one has come from somewhere in the world, this is how our society has developed and prospered through emigration. So in Australia I was always in contact with my past and having a large number of relatives here made it easier.

8.What are other BJJ players that you admire, and why?

9. How would you describe your game? What your favorite guard passes, submissions?

10.If you want to thank somebody please feel free

I would like to especially thank Paulo, Jorge and the rest of the Roots team that unselfishly share there knowledge so that we may grow.

11. Thank you Robert and all the best!

Thank you so much really appreciate it