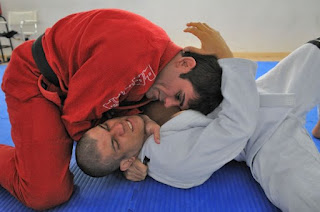 1.Hi Orlando, please introduce yourself to the BJJ community of Eastern Europe? 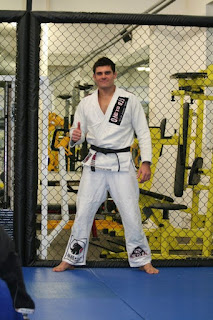 I´m Orlando Machado Neto (O.NetoBJJ), from Rio de Janeiro, Brazil, and I live in Vienna , Austria where I teach at City Thong Gym representing the AkxeBJJ wich is my team in Rio de Janeiro , I´m a 3rd degree Black Belt  under Vinicius Campelo and Octavio Couto. Vini is Black Belt from Rickson Gracie and Sylvio Behring and Octavio from Romero Cavalcanti and Vinicius Campelo. My last title was the IBJJF London Open last year.

2. Please tell us how you got started in bjj , who did you train under, and generally your BJJ journey?

When I was 4 years old I first got in contact with BJJ. My Step father Sergio Mallandro was one of the first students at the Carlson Gracie school in Copacabana wich is one of the most traditional BJJ schools in Brazil . Most tough guys from that time were training at that Jiu-Jitsu temple and I had the luck to grow up watching all those daily batles that were the trainings at Carlson´s School. I really started taking BJJ more seriously when I turned 14 years old and started training with the big wave surfer ( Big Rider) Renan Pitanguy who was a great fighter and also the best big waves surfer of Brazil at that time. I got my blue belt a couple months before i turned 16years old and I moved to the States for 1 year where I was playing American Football and therefore teaching BJJ to my team partners. That was very fun but many of them were also wrestlers and I remember that every time that I attempted a triangle they would say that I lost because i put my back on the floor. Once I was back home from America, Renan had some problems with his school and was kind of stopping teaching so I got to know my Master Vini Campelo who was a friend of my cusin Zé Artur “Peti” who was already training BJJ but was also one of the greatest surfers in Rio , and from then on I was a proud member of AkxeBJJ.

3. Please tell us how you opened your bjj school in Austria and how is the bjj scene over there?

For the past 10 years I’ve been teaching seminars all over Europe but always coming back to Rio where I was the Head Coach in AkxeBJJ for a couple of years. My Master Vini is one of the Co-Founders of Alliance Jiu-Jitsu together with Romero “Jacare” Cavalcanti , Roberto Traven, Fabio Gurgel and Alexandre Paiva. I remember that the Eagle of Alliance was an idea of Vini ( he’s a Pilot). I couldn´t leave our School at that time, but as soon as new Black Belts were made they started teaching as well so I decided to stay longer in Munich. It was my second city after Vienna, after Brazil of course. I still have some roots in Munich where i visit often my friend Diogo Primo who is leading the AkxeBJJ overthere. The best MMA Fighter of Vienna, the Brazilian Lincon Rodrigues was going often to Munich to train with me. He liked my training very much and once he brought me to Vienna, we started working together. The scene here , the amount of people training is really big, and after hard work I’m proud to be the first Black Belt to have a BJJ school in Vienna and Germany. I was also the third Black Belt to teach in Poland after Roy Harris and Jorge Patino “Macaco”. In the begining people here were too envolved with MMA but they had no clue what it was really .Now they are learning that to do MMA you need to have at least a good base in at least 1 martial art and be a champion in this art. Once you achieve that you can try one or two more styles and see how it goes. I´m very happy to see my students wearing the kimono everyday and everyday getting more and more the BJJ virus and lifestyle. I don´t like to mention individual students because i have many big talents and I wouldn´t like to forget some names , but I will mention 2:  Daniel Schaerf who is the best Grappler and BJJ player of Austria and my 8 months old son Lorenzo Machado who is already sweeping his bunny rabit as a Black Belt hahaha.

4.Being an accomplished competitor what are your biggest titles in bjj?

At the Black Belt I was Rio de Janeiro State Champion, Cyclone Cup Champion, London International Champion, Second Brazilian Open and some others… After I got my Black Belt I had a big surgery on my back, I stayed 6 months of my life barely walking. The doctors said that I could go back to teach one day but never train properly again. They told me to forget about tournaments, but since last year I’ve come back. It’s been really painful because I still can´t train hard everyday for the tournaments, which also makes it hard for me to keep my weight, but all this is worth a try. I’ve only decided to fight now because I feel that my students are going to feel proud of me. I do it for them and I know that winning or loosing they are still going to keep loving me anyway, but for myself my biggest victory is to watch them improving as good as they are doing.

5. What do you think of all these crazy techniques like berimbolo, reverse De La Riva guard, etc? Do you use them or do stick to solid basics?

Those techniques always exist but many BJJ techniques have no name. Before there was no youtube or BJJ on internet, so now what is happening is that somebody gets famous for a style or a move that they used in a tournament. Maybe they just adapted the move for themselves and then the next day they post it on YouTube with a new name. I remember for exemple me and my teacher Octavio Couto 15 years ago were very often practicing the 50/50 guard. There is a big evolution in the BJJ game wich will never stop. This makes BJJ even more fascinating but everything needs and has roots in a solid base that was left for us from the Gracie Family who I´m a big fan of. Yes I also use a couple of strange moves sometimes hahaha.

When I was younger there were many guys that I admired like Nino Shembri , Leo Vieira or Rodrigo Comprido. Rickson Gracie is our God of BJJ and was always my biggest idol. Nowadays i love to watch Roger Gracie when he takes the best from the simple things. he does not base his BJJ on explosion and power like most of the competitors today. Even then he is really strong  . . .
But I have to confess that today the old school big Masters inspire me even out of the mats like, my Masters Sylvio Behring , Fabio Gurgel , Renzo Gracie, Rickson Gracie …

Last year we were one of the most successful teams that I’ve ever seen . The percentage of winning in the tournaments was something amazing. For exemple at the London Open we were only 11 Athletes and we got the second place on the teams contest loosing only to Roger Gracie who had more than 100 athletes, CheckMat got third with more than 60Athletes. In the Vienna Open last year adding the points of all other teams did not reach us. We got the first place leaving the others way behind.
For this year I’ve decided that we are going take part in less tournaments so that we can have less injuries. Our plan is the London Open and a couple of other tournaments to prepare to the European in the begining of 2013 .

8.Do you do any other sports apart from Jiu-Jitsu and do they help your BJJ game?

I´m lucky that i teach in CityThongGym. The owner of the gym worries alot about offering quality so he looked to offer the best in Thaiboxing, Wrestling and BJJ. I have fun with José Lantigua who teaches me Thaiboxing and I also train wrestling with the Visalimov family. Outside of BJJ my hobby since i was a kid is scooba diving wich keeps me calm and expands my Lungs wich gives me more oxygen for my fights. Unfortunately here we don´t have the sea, so I’m spending all my free time in the mountains snowboarding wich I think does not help me so much in BJJ.

9. How would you describe your style of BJJ?

I try to make the fight as easy as possible for me. I avoid anything that can complicate. I can say that my BJJ is well rounded as I don´t have a strong specific game that I stick to. Whatever comes im ok with that.

10.If you want to thank somebody please feel free