Alliance Serbia’s Mateja Valjarevic on His Training Trip In Brazil, His Academy & The BJJ Scene In Serbia 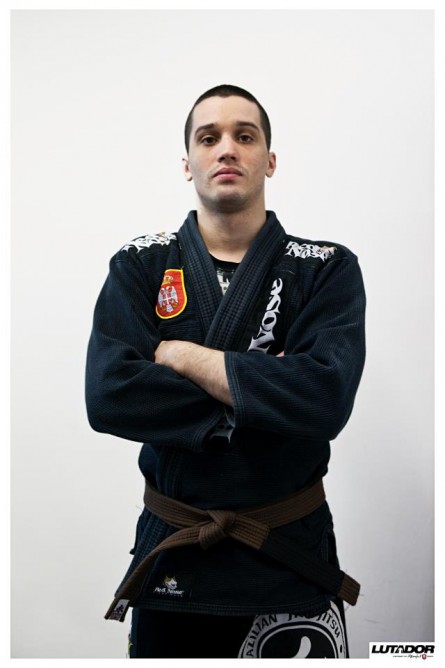 1. Hi Mateja, can you please introduce yourself to the BJJ Community of Eastern Europe?

Hi, my name is Mateja Valjarevic , 27 years old , Brown Belt form 01/2012, I am from Belgrade, Serbia. I am training at Lutador BJJ (now Alliance Lutador) and I am professional coach for BJJ.

2. Please guide us through your Jiu-Jitsu journey.

I first had contact with BJJ in December 2004. My training partner from Real Aikido was doing some BJJ in his home city. So he showed me some moves. We started training about once a week, only us two. After a few moths I decided to start looking for some school in Belgrade. Then I didn’t know that we had a Black Belt in Serbia. So I found Jovan Zerjal’s school trough a web search and joined the club in 2005. In 2007 I got my blue belt . In 2008. Because of popularization of the sport I openned my own academy. I know that that is not a practice to do in the world, but we needed more clubs to make the scene grow.

I called my club Lutador and registered it in the Ministry of Sport in 2009. We started having classes 3x per week in the Sport Center Tasmajdan in the center of Belgrade. My club start growing so I made another group, one for beginners and one for more experienced guys.

The club again started growing so I decided to look for a space and put the tatami and everything. Now 5 and half years later we are renting a space and have gym for 24h hours, we have mats , weights some equipment gym, battling ropes, bulgarian begs, kettlebles etc..It is small but full equipped gym.

3. Before BJJ, you trained Real Aikido. Please tell us more about this Serbian martial art.?

4. Please tell us about your academies and your team. 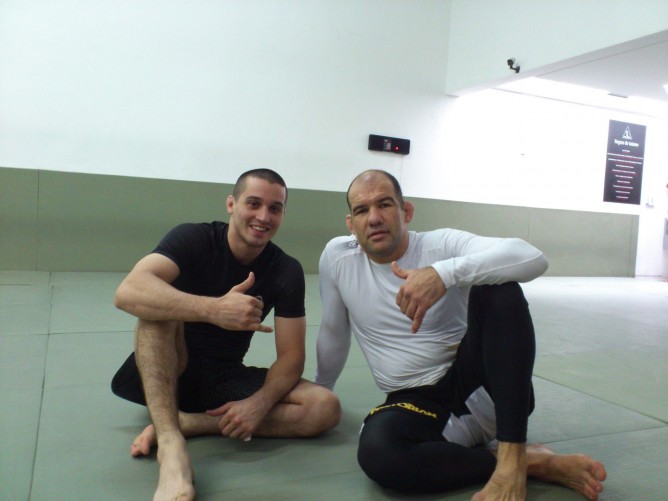 5. You have just come back from 2 months training in Sao Paulo. Tell us about your experience over there.

I always wanted to go to Brazil , but never had the opportunity for that. In the last year I saved some money and finally got opportunity to go. The only problem was that I didn’t know where to go. In 2011, I was on a training camp in Zagreb , Croatia with Master Fabio Gurgel (5 degree black belt). I contacted Fabio trough Fb and he said to me that I am welcome to come and he gave me the contact of his manager. His manager told me that I could join competition team classes, so I was more then happy with the choice I made. Because Alliance have so many great champions.

When I arrived in SP I was surprised to see that one of my roommate was Leo Nogueira (2x world black belt champion ). Also there was Pablo, 4 degree blue belt and Ricardo “Kiko” brown belt. I had great times with that guys and become very good friends with them. They helped me a lot because I don’t speak Portuguese and in Brazil not so many guys speak English.

In the academy there was so many good guys, so I got my ass kicked all time LOL . There was competition training in 12:00 and advance training from 20:00h trough the whole week. On Saturday there was training form 10-11h and 11-12h. Anyways, the academy has 7 trainings per day but these two are main ones. When I rolled first time with Leo it was like fighting with a tank. He is so strong and has incredible pressure haha. There was also 3 very good Purple belts , Ali, Caio and Edson, very nice guys and very good BJJ. Brown belts there was Little Fabio, Mathias , Ricardo, Kiko also very good guys. And of course black belts. I must say that I was surprised with Luanna Alzuguir, first time I see and feel that good woman in BJJ. I was together with her in some group for specific drills and she is like 15-20 kg lighter then me , the only thing that was saving me was that I am bigger and stronger then her. She has very technical BJJ

I also rolled with Fabio Gurgel, but he was going easy on me I feel that, tapping me only 3 times or something like that. Very good pressure and blocking so I couldn’t do anything. I must say that I was very honored because he invited me to roll.

Everybody was very nice to me at the academy and helping me with everything. And there was one more thing, they are like a big family always hanging out together after academy and socialize. It was very similar like Lutador BJJ. Fabio Gurgel gave me the opportunity to become part of the team. So I decided to join Alliance Jiu Jitsu and to try to make BJJ bigger in Serbia.

6. How do you see BJJ developing in Serbia?

Now there are more and more clubs. Before there was only one black belt, now there is 8-9 black belts. You also have more teams, so it is better for competitions. But still BJJ is very small comparing with the rest of the world. Main problem is money. the government doesn’t support bjj athletes eventhough they are leaving their soul on the mat. The government only gives money to football , basketball and tennis. The rest of us that represent Serbia and are carying the flag on many competitions we don’t get nothing. We don’t get help in preparation for the competition, for better food, supplements, travel ticket. We are paying everything ourselves. Until this isn’t changed I think that BJJ wont progress more in our country.

Also there is very low wages in Serbia (on average 300 euro a month around 35000 dinars ) and I think that is also a big role in developing. When you have a low wage and need to pay training that cost about 3000-4000 dinars + the registration fee for the competition, it is too much for some people.

We have now very good competition oriented team and we have many good guys, so the next thing is to get trophy on Serbia Open in October haha. I don’t know if we are going to succeed in that , but we will try to do it. We want to compete as much as possible: Slovenia, Hungary , Croatia, European.

Also we will now be getting some big names in Serbia few times a year because we are part of Alliance Jiu Jitsu Family . There was never Black Belt World Champion visiting Serbia. I am hoping that I will change that and make BJJ more popular here.

I want to thank Danijel Brajcic and his www.bjjshop.rs because he is my only sponsor here and I am getting equipment from him.

I want to thank Alliance SP

9. Thanks Mateja and all the best!

Thank you BJJ Eastern Europe all the best !