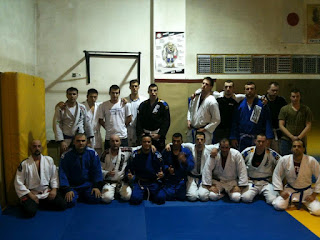 This is a first edition in a series of training reports that I will be conducting in my travels around the world in the future. In May, I will be spending 2 weeks in Paris and will be training at the best BJJ academies while there. BJJ first started in Europe in France back in 19995 when Rickson Gracie held a Seminar in Paris. Now France leads the list of BJJ black belts in Europe with Over 100.
So anyway, I thought I would start off right at home, here in in Belgrade, Serbia where I live but not in my own club (Zerjal Team- Carlson Gracie/Pinduka) but at Rio Grappling Club Serbia.
The goal of this series of training reports is to promote unity in our BJJ community. In BJJ, it can be frowned upon for people to train in different academies at the same time as one can be seen as a “Ronin” or even a “Creonte” going left and right picking up techniques which you may be forced to use against the same people in a competition. I personally believe that we should know where our home is (our main academy) and be loyal to our instructor but sometimes it is healthy to roll with different people and training partners.

Anyways, I decided to contact Nenad Latincic, who is the head instructor of Rio Grappling Club Serbia. I know Nenad since 2003 when he was still a member of Zerjal Team. He actually got his blue belt from  my current instructor Jovan Zerjal, and later went on to do his own thing. Fast forward to 2012, he is now a brown belt under Roberto Atalla (who is the the creator of the worldwide organization Rio Grappling Club). So on a friday afternoon, as I finished up my work for the day, I drove to the Banovo Brdo neighborhood of Belgrade to head for a training with different team. I wasn’t too sure what to expect to be honest, but as soon as I arrived and greeted all the guys in the changing rooms, the relaxed and friendly atmosphere made me feel really welcomed.

The actual training area had nice new blue and white tatami mats and was clean. The group was well sized and consisted of two browns (Nenad and me), two purples, 6-7 blues, and about 10 whites. At the begining of the class Nenad lined up the group and introduced me. I then gave a small speech . We all clapped and the class started. 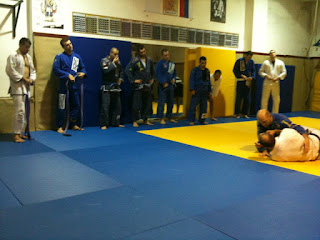 Instead of the usual warm up consisting of running and break falls, we warmed up by doing very light sparring amongst each other for 10 minutes. I paired with one of Nenad’s purple belts and we started to roll. I was trying to do my best impression of the Miyao brothers with rolling berimbolos, back takes, arm drags and generally rolling around like a playfull monkey. I then warmed with a blue belt who is actually a Jordanian dentist that has been living in Serbia for 15 years.

After breaking up a nice sweat, Nenad asked me to show the group a technique, so I very gladly showed my go to submission from the mount: “The cross collar choke ala Roger Gracie”. The actual set up has so many details that it makes it quite a complex submission. after the guys were drilling it for a good 5 minutes, I showed a variation when you reverse the order of the hands in the collar, meaning you put the second hand in first. Nenad also showed a good counter to a mount escape. After drilling we proceeded to the fun part: sparring.

Nenad and myself paired up first and I could see right away that we would spar technical, not really looking for submissions which is great. As a rule, when I’m visiting a academy, as a form of respect, I don’t try to submit the instructor. Usually I’m getting my butt kicked anyway as most instructors are experienced black belts. But in some cases if i see the opportunity for a submission, I will go for it but won’t pursue it to the end. Anyways, Nenad and me were rolling around and exchanging positions and it was a really fun roll with no ego involved. Nenad has a free flowing way of rolling and doesn’t remain static. He has a nice guard pass where he is standing and just slips his foot diagonally across your guard.

I then paired up with Sasha Vasilijevic a 100kgs purple belt who I actually faced at the Serbian Open back in November. Our roll was also very technical without going 100% and really looking to use more technique than strength. I ended up rolling with all the blue belts so for a good 7 rolls all in all.

My main impression is that the guys were rolling really technical and light and trying to focus more on technique. This was different than what I am used to in my academy where we have a more Carlson Gracie smasshing style even we roll in training. I personally like sparring with guys with a smashing style and giving 100% in training rolls as it prepares me well for tournaments. However it’s also nice to have training partners that roll light so that you can try new techniques.

I think Nenad Latincic did a good job with his BJJ academy as his guys are very welcoming, well behaved, and technical. There is no swearing on the mat. When he talks, everybody is quiet and listens.

After training we went for some drinks and grilled meat at a local restaurant and enjoyed the nice spring weather of Belgrade 🙂 Thank you Nenad and the guys for welcoming me so warmly and let’s roll again some time. OSSS!