Rodrigo Cavaca: “Buchecha Will Be The Best In Jiu-Jitsu History.” 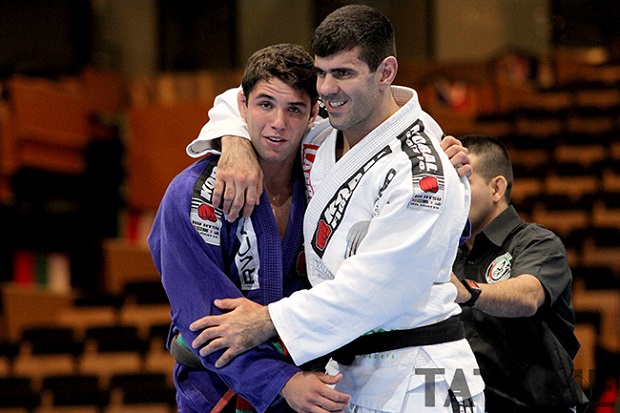 Two years after Having temporarily stopped his career due to knee surgery, 2013 will be a special year for Rodrigo Cavaca. After his great achievement – when he closed the category of ultra heavy with his student Marcus Buchecha in Abu Dhabi World Pro – the leader of Checkmat reached his dream and also managed to compete at the Worlds, only this time, the title went to his his student. He talked to Tatame (translated interview from Portuguese) about his goals and the success of Buchecha.

“The biggest dream of my career was closing the Worlds with Buchecha. I did not know when it would be, but I knew I would one day realize it. I came very prepared for this event, coming from good performances during the first half of the year. I knew this would be the year, so I talked to everyone who was with me I would close with my boy, and, thank God and everyone who helped me, we got it, “said Cavaca.

What about Buchecha, Cavaca is full of praise and has stated that he will be the best in Jiu-Jitsu history. Owner of two world titles absolute, the young fighter is according to his teacher, has not yet reached the pinnacle in his career.

“Buchecha will be the best in history. He’s still getting a lot better in the coming years. I created this kid and always praised him and said that he was not in his prime yet. I said he had more to give, and he grows every championship, “said Cavaca.

“In 2011, when he lost the final of his first Worlds at black belt to Léo Nogueira, I warned him that he was not ready for the title. The following year, in 2012, before the fight with Rodolfo, I said, ‘You remember last year when I told you that it was not your time? So today I’m here to tell you that your time has come. You will be absolute world champion, because I know you more than anyone ‘. And he became world champion. ”

With the first half of a magical career, Cavaca is already targeting another goal. According to the black belt, his focus now goes to the ADCC, 19th and 20th of October, in China, to get the medal that is missing in his vast collection.

“With the Worlds dream achieved, I have several seminars and workshops throughout Brazil and the world. In addition, I’ve begun preparing for the ADCC, it is the only title that I don’t have on my resume yet, and, as this year is wonderful for me and my team, why not go for one ore victory? “.