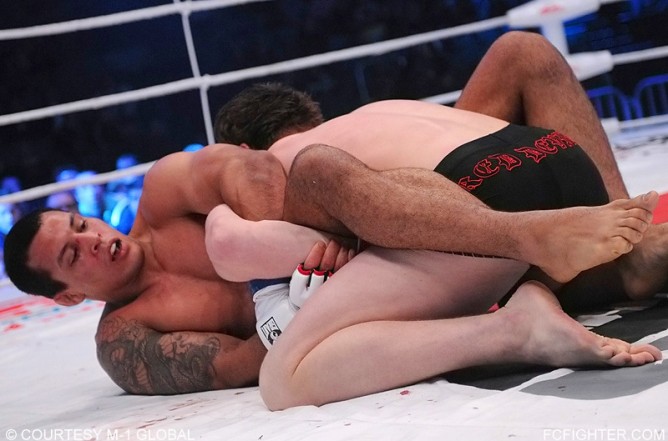 Anthony Perosh called for a bout with Vinny Magalhaes and the UFC brass answered, booking the fight for UFC 163. Both are jiu-jitsu black belts, but according to Magalhaes, Perosh is not on his level:

“I don’t want to sound like I’m talking shit, but Anthony Perosh sucks. He has good jiu jitsu, I mean, he’s like the best guy in Australia, as far as jiu jitsu goes, but there’s just him and his brother. If you’re the best guy, you should have at least 20 guys to compete against. When it’s just you and your brother, being the best guy in your country doesn’t really mean much.

When I first signed with the UFC again, Joe Silva asked me to give him a list of names of who I would fight immediately. I gave him a list of like six names, and Anthony Perosh wasn’t on that list, but he ended up being the guy that Joe contacted first, but Perosh was like, ‘No, I don’t want to fight Vinny.’ He was on a little streak, so I guess, for him, that fight didn’t make any sense.

Now, after I lose a fight to a Top 10 guy, I mean, he’s nowhere close to Phil’s level. It’s like he’s saying, ‘Oh, I want to fight Vinny because he sucks.’ I took it personally, because when you call somebody out after a loss, it’s like they’re saying they want to fight you because they’ll beat you up, too.”