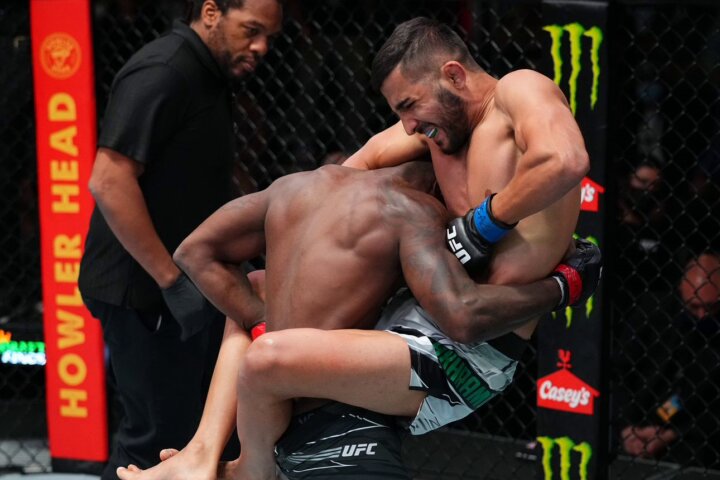 The danger of a standing Guillotine Choke is real, not just at a BJJ white and blue belt level… But at the highest of levels as well, including MMA. As a matter of fact, the recent “UFC Vegas 34” event saw Saidyokub Kakhramonov putting Trevin Jones to sleep with this exact submission!

Kakhramonov has a great Judo background, and was thus content to work from the clinch for much of the match. However, Jones was successfully shutting down his takedown attempts.
Therefore, Kakhramonov went to the tactic of tiring his opponent out. He threw some great combinations on the feet, including some stiff punches that snapped Jones’ head back and had him rocked. However, just when it seemed like Kakhramonov was going to take over, Jones countered with a takedown of his own. He finished the second round from the Mount, raining down vicious punches against his opponent.

But then again, Jones found himself stuck in the clinch with Kakhramonov once more in the third round. When Kakhramonov found an opening for the Guillotine Choke, he locked up the hold and just kept putting pressure… Until Jones went limp and referee Herb Dean rushed in to stop the fight.
Check out this standing Guillotine Choke finish here: