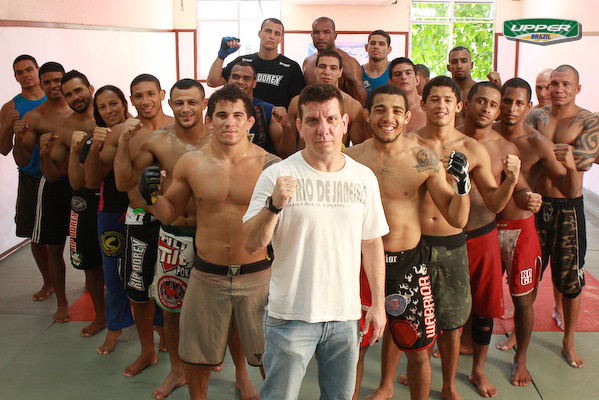 Regarded as one of the top jiu jitsu and MMA academies in the world, Nova União has busted into MMA (Mixed Martial Arts) in the later years through fighters like Renan “Barão”, José Aldo, Jussier “Formiga” and many others. The team led by Wendell Alexander and André Pederneiras has been at the forefront of jiu jitsu and was regarded as one of the top 3 BJJ academies in the world at the turn of the millennium, with 2 team world titles by 2002. Since the shift to MMA, the dominance in the jiu jitsu world toned down, though Nova União is still considered to be one of the best academies in the game with very strong affiliated academies throughout the world such as Kimura in Natal (Brazil), Fernando Boi Team in Goiania (Brazil), Robson Moura Association (USA), Gustavo Dantas JJ Association (USA) and many others. Read full team biography from BJJ Heroes.

Novao Uniao leader Andre Pederneiras recently spoke with Brazil’s Combate about how nowadays in MMA you have to be more of a brawler and a trash talker to get a title shot:

“People have to understand that there are two side now in the MMA of today, mostly in the UFC: the sporty side and the business side,” said Pederneiras, as translated by Fernando Arbex for BE.

“I’ve always learned and passed to all my athletes that you have to respect your opponent, even if you have beat the hell out of him. You always have to be polite and treat him in the best way. But this model is not attractive for the business side. You see people having title shots by talking a lot. I can say that it’s wrong? I can’t. By the business side, it’s absolutely right. By the sporty side, it’s wrong.

‘As as coach and professor, I don’t want to see my fighter doing trash talking and have altercations with other guys. I want him to be a UFC champion, but also be a good person, to be polite and learn things for the rest of his life. However, we’ll have a meeting here to talk about the business side. We are in a dilemma. You have to enter in a fight thinking about the show or other guys will pass you.”

“About 10 or 12 years ago, I had a talk with my athletes. We were a Jiu-Jitsu gym and were going to become a MMA team. I told them this: ‘If you just took your opponents down and don’t do stand up fighting, no organization will want to have you. Nobody wants to watch a guy that just does grappling, sometimes having a submission and sometimes not. In this market, the American market, people want to watch striking. You can takedown your opponent but also trade punches with him.’

‘We have invested in training to avoid being taking down and to strike for a long time. This meeting that I will have with them is to say that the market doesn’t want you to just trade punches with your opponent, but also that you talk a lot of s— about your rival to to get everybody’s attention. We didn’t want this, but it sells good and financially will be nice for the fighters.”