There has been past animosity between multiple times BJJ champ Braulio Estima and Nick Diaz. Last year, Nick and Braulio were supposed to fight a BJJ match for charity during the Jiu-Jitsu expo but Nick Diaz didn’t show up. Braulio went on to say that he would like to even fight Diaz in a MMA match. Braulio was tonight in Georges St Pierre’s entourage at UFC 158, as he had helped prepare GSP with a roll of a grappling sparring partner mimicking…Nick Diaz. 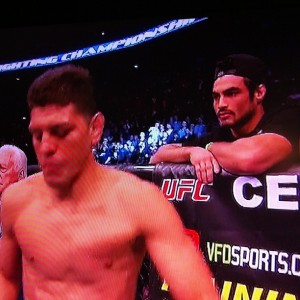 The animosity with Kron Gracie (son of Rickson Gracie) comes from the fact that Kron beat Braulio’s brother Victor Estima in a BJJ match at the same BJJ expo. He won by advantage in a tight match. After the match he mocked Victor by making fun of his usual victory celebration. This time however, according to Braulio’s facebook statement, Kron, who was in Nick Diaz’s corner during the UFC 158 bout, openly insulted him and threatened him after the fight.

“Today it was amazing. George did a great job full to control the whole fight. Unfortunately, I got a very disappointing experience. After the fight I went to shake hands with all the members from Nick Diaz, I wasn’t very welcomed by Diaz which I expected. I just wanted to give my respect for that fight as a martial artist. Even Dana came to straight after and said thanks for not pushing back. I replied I would never ruin my friends gsp night for that guy. But this wasn’t the bad news. The bad news was how rude Kron Gracie was towards me when I was being so respectful and never ever came in a tone of disrespect even when he won battle with my own brother. I always had a sincere admiration for him specially because we have hanged out many times together and he is the son of one of my idols Rickson Gracie. I got shocked today when he passed towards me after the post conference together with Nick and Nate calling me names and stuff. Coming from Nick and Nate I can even understand and I don’t care but from Kron a guy that I considered a friend a Bjj representative together with me Calling me “mother f*cker “and to “watch out to dont get my a*s kicked out side” was a bit over the top. I just ignored as I’m having a blast tonight and he has been immature as many times in the past ….. In a fight we win we loose and many people uses a lot of talking to promote their fights but fights over we are in the same level as human being. Shame on that incident pretty dam shocked. I DON’T EVEN KNOW HOW TO EXPRESS AND HOW TO DEAL WITH THAT SHIT.”