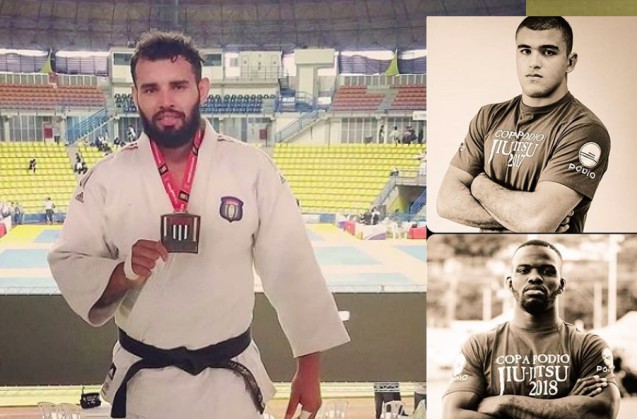 The Brazilian professional BJJ invitational Copa Podio has prepared a great novelty for its upcomming Heavyweight GP, which will take place on the 16th in Porto Alegre: the presence of a judoka among the participants. Horácio Antunes, black belt in Judo, competes for the São Caetano team in São Paulo, and in BJJ he is a blue belt at Gracie Barra Curitiba.

In an interview with TATAME, the judoka said he that may surprise and will get the title of the tournament.

“I think I might surprise, yes. Because all the opponents that I will be facing, they must know each other very well. Because I’m from Judo, it will be very difficult for them to know me. So I think I can be a surprise. My pretension is to win, I’m going to be champion. But of course: I’m thinking fighting for a fight. As soon as the groups are decided, I’m going to study my opponents more and I’m thinking of reaching the finals and bringing that title home, “commented Horacio, who is 26 years old.

A Judoka since the age of eight, he said that he always practiced Judo ne-waza in order to gain an advantage in Judo competitions. However, he began practicing Brazilian Jiu-Jitsu more seriously just three years ago in Porto Alegre, and currently trains with Professor Pimpolho. Last May, Horácio became Brazilian BJJ champion (CBJJ), in Barueri (SP).

“So nowadays, Judo needs Jiu-Jitsu and vice versa. I went into Jiu-Jitsu just for that, looking to take advantage of my opponents, especially in my weight category. Because in my division, of the heavy, up to 100kg, the opponents do not know much ground. With that, I am looking for a certain advantage and I believe that Jiu-Jitsu is the same. You start with two points in the front, especially if it is a tough fight, you can guarantee a win and even a competition, “said the Judoka, celebrating the opportunity to participate in the podium heavyweight GP.

“I was very happy when I received the call being invited to participate in the Podio Cup. I am very happy to be sharing the mat with these Jiu-Jitsu beasts worldwide, even more representing Judo, my root. I do not think that I will take advantage over the opponents just for being judoka, but for being very competitive, I have been in this life since I was 8 years old. I was the Brazilian team of U-18, U-21 and adult judo, heavy training from an early age, maybe that, yes, is my advantage, “said Horacio.

This is not the first time that Copa Podio invited a high level Judoka to compete. 4 years ago, Travis Stevens also competed and came 4th, losing to Paulo Miyao in the semis.