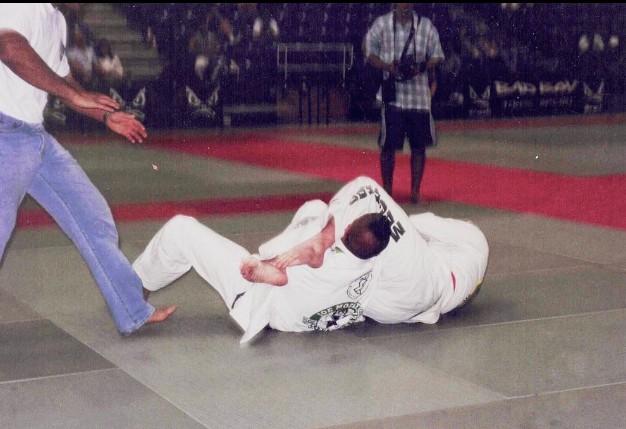 Chance Wanlass, an old school Machado BJJ clack belt wrote on IG about a historical moment for BJJ that happened in 1996. It was the first ever time that a non-Brazilian bjj black belt submitted a Brazilian in Competition.

“Never before seen Historical Moment that changed the BJJ World.

I took these pics at the 1996 Joe Moreira tournament in Irvine, California. The sequence shows my teammate Chris Haueter, a brand new black belt at the time, submitting his Brazilian opponent while Rickson Gracie refs.

This was a hugely significant moment for all US grapplers, and grapplers everywhere really, because it was first time in the history of BJJ that an American BJJ Black Belt submitted a Brazilian Black Belt in competition.

Before this happened, all (meaning Brazilians & non-Brazilians) believed that the Brazilians were utterly unbeatable, that their grappling was in a class of its own – a class so elevated that to us mere mortals the Brazilian competitors might as well have been Olympian Gods. And the Gods were pleased, mostly with themselves…

Like all historic moments, it was a crescendo of an epic cultural battle. It all started when, to the great displeasure of the Gods, two of their own (Rickson Gracie & Rigan Machado) decided to open bjj academies in America. The other Gods were utterly mortified that Rickson & Rigan (the world’s first international Creontes) were giving away all the Gods “Secrets” to the Americans. That if the Americans knew their secrets they might eventually become a threat. But that’s not what happened and it’s also not why Chris won.

Turns out that the reason Rickson & Rigan (by far the most powerful bjj Gods of their respective eras) opened their own academies was so that they could be free to develop & teach the new styles of BJJ they themselves were creating. And We, the first generation of American BJJ competitors, were unknowingly blessed & lucky enough to be their clay.

Over time the efforts of these creonte Gods, and a few others like Joe Moreira, gave birth to the first American BJJ game – a blend of BJJ, Greco & Freestyle Wrestling, Sambo, Judo with a dash of Jet Kune Do. The very same game that would later become the dominate force in the UFC for much of the late 90’s & early 00’s (Randy Couture, Dan Henderson, BJ Penn, etc)

Chris’s win that day ended one era and became the starting point of another. All because of two Creonte Gods…”