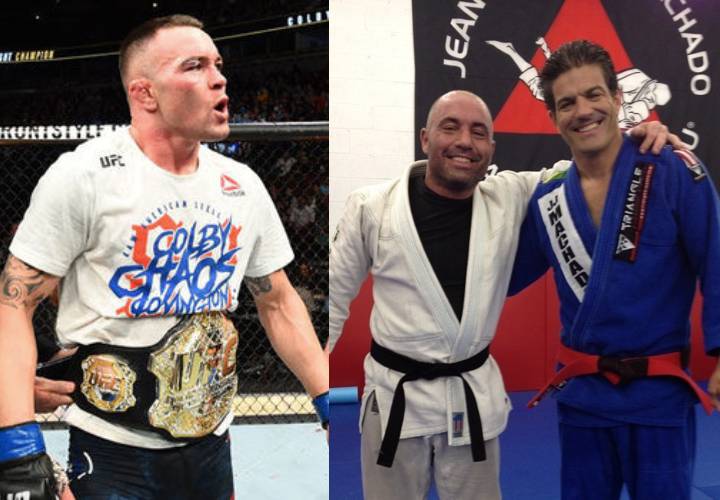 UFC welterweight Colby Covington was quite disrespectuful towards some BJJ champions and Brazilian Jiu-Jitsu in general on MMA roasted podcast.

Colby was asked how he does with all the BJJ black belts at the gym at ATT:

I saw every single one of them. It’s not even competitive. 8 years ago, I won the won the Fila Grappling world championships in my first year of training Jiu-Jitsu. Now 8 years after and training at ATT, I’m on a completely different level. If I went to ADCC, I’d win easily.

On the time he trained with ADCC champion Rodolfo Vieira:

One time, Rodolfo Vieira came to ATT and we trained. After one scramble, I broke him in under a minute. I mounted him and he couldn’t get me off of him…

He also talked about the BJJ belt system:

“It’s a Ponzi scheme. It’s a money laundering system for people to make money. They say that it’s about respect. These are the same people that are cheating on their wives, having infidelity in the MMA gym, cheating on their taxes… it’s all bulls***, man.”

He also had some choice words for Garry Tonon.

That guy sucks man. He got submitted by Shoe Face (Antonio Cara de Sapato jr.) in under a minute. I train with Shoe face every day.

Tonon was quick to respond:

Apparently @ColbyCovMMA believes he can beat me in a jiu jitsu match. Whoever wants to set that up I’m game under one condition, Colby’s mama has to be there to wipe up his drool after ya boy gets SLEPT!

Yesterday on MMA roasted @colbycovmma said he could beat me in a grappling match. Let’s see it happen, I only have one condition, Colby’s mama has to be there to wipe up the drool after ya boy gets SLEPT! 😴😴😴😴