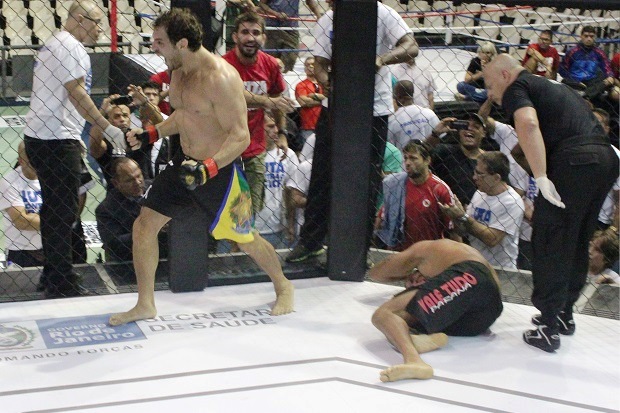 The Festival “Fights Against Crack” was held at the famous Tijuca Tennis Club on Sunday June 23rd in Rio de Janeiro. Promoted by Murilo Bustamante, the event featured matches in Wrestling, Jiu-Jitsu, Boxing, Judo and MMA and filled up the stands of the gymnasium, a former stage of the Jiu-Jitsu world championships.

In MMA, Leo Leite debuted on the right foot in the Octagon. Former judo Pan Am champ and a black belt in Jiu-Jitsu (ex world champion in 2000), he finished Alessandro Macedo with a rear naked choke, in the first round and began his journey well in this new challenge.

“Before I went, I said in the locker room that I was feeling great happiness. I hadn’t felt this good in a long time, not even in Judo or Jiu-Jitsu. I went quiet, no anxiety and the debut was perfect, especially in an event like this, which shows that the sport is the best tool to get the youth out of the evil ways, “said the athlete.

In Jiu-Jitsu, the highlight was the confrontation between Theodoro Canal and Leonardo “Cascão” Saggioro. Rodolfo Vieira in his corner, Theodoro defeated his opponent by Judges decision and celebrated with noisy fans GFTeam.