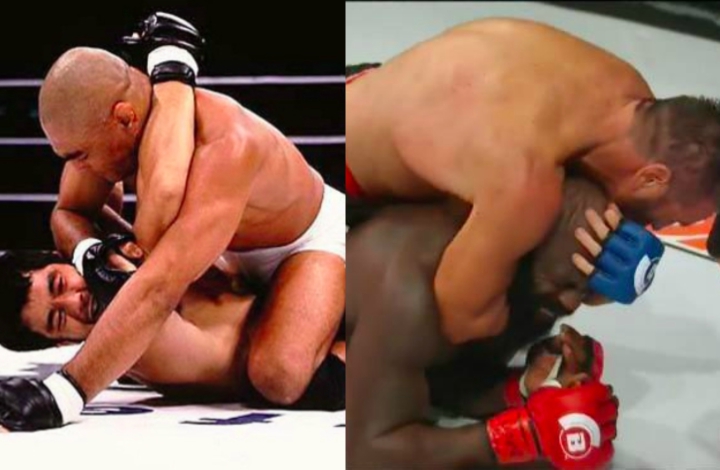 Many consider “the back” position the most dominant position in all of jiu-jitsu and are willing to give up any position to take the back.   “The Back” is considered by many the golden position, a place where we all strive to get to but for MMA or Self Defense it is not a position I recommend for my students and I usually advise them NOT to take the back if securing it places them on the bottom of their opponent.  If given the choice I always prefer for my students to maintain the mount and stay on top and here is my reasoning why:

There is a much greater ability to do damage with strikes from the Mount Position.

From the mount we have the advantage of being able to reign down very heavy punches and elbows.  From the back, striking is quite limited because we are facing the back of the opponents head and striking that area is illegal in MMA and in a fight without any protection for the hand, there is a very high risk of breaking our hand when striking to the back of the head.  Looping punches to the front of the face does not have the same ability to do damage because the angle and the lack of body weight going into the attack.

I’ve actually seen the person in front able to strike and do significant damage to the person behind by feeling where the persons head was and throwing punches up and over their shoulder.  Also in a fight, with our face so close to the back of the opponents head, if they decide to throw head butts using the back of the head our face is right there.  It doesn’t take much distance to be able to do a huge amount of damage with head butts.  One good head butt to the chin or nose and that could be game over for us.

There are far more options to finish from the mount then from the back.

From the mount we can go for the americana, guillotine, head and arm choke, hammer fist choke, several arm bar variations and triangle.  From the back in MMA or no-gi we are left with usually just one option…  the RNC or rear naked choke. (there is also the option to transition to the arm bar from the back but very rarely do we see it done in jiu-jitsu or mma). Because our opponent only has one submission to defend against and not much fear of taking damage from strikes, it makes it far easier for them to defend the only attack… the RNC. Options are always good, especially when we can create pressure and panic with strikes.

Having someone bigger on top can be very uncomfortable.

From the back usually we end up sandwiched between the ground and the person we have on top of us.  Because jiu-jitsu was created for smaller individuals to be able to deal with and overcome larger individuals, I always think to myself would I want to pull someone on top of me 100lbs more even if I’m on their back?  It can be extremely uncomfortable with someone much larger on top, now add in moving around on concrete or asphalt and that can lead to a severe case of road rash.

Having someone on top of us now makes it difficult to disengage, get up and run, if need be.

Sometimes in a fight it’s better to run.  By having someone on top we can end up stuck on the bottom because they are either lying on our body or limbs. This can make it very difficult to get up and get away if need be.

If they turn to escape, we are now on the bottom in position for the ground and pound.  If the opponent turns, which happens frequently, our opponent ends up in our guard, which gives them the advantage with strikes and the ability to “ground and pound”.  From the mount if they turn we are still safe from taking damage, even if they escape the mount to half guard if we stay on top we still have the advantage with strikes.   I always tell my students, one punch can change the fight. The priority in fighting is not to get hit and by staying on top we have a huge advantage in not taking damage.

Obviously there are some examples of people having success finishing from the back.

Rickson Gracie even did it in his last fight with Funaki after creating pressure and punishing him from the mount and then gift wrap for several minutes.  How he set up the choke is really important though.  With the gift wrap position the person is trying to pull their arm out to get out of the hold and because of all the pressure Rickson put on him with strikes, by pulling his arm out he actually helped to lace Rickson’s choking arm around his neck.  By the time Rickson actually had the back position the choke was already sunk through the transition. If you watch in the video Rickson falls to his right side and is choking with the left arm.  This is usually avoided because he’s falling towards the side of the escape but by the time he hit his side both his arms were locked in.

Where I see most fighters having a higher rate of success with the RNC is a position many people call back mount, where we have the back and the opponent is belly down (on bottom).  This is because with their arms pinned underneath them it is very difficult to defend the RNC or even if they get up on all fours they lack the mobility with their arms because they usually have weight in their hands or elbows which makes it difficult for the hands and arms to come and protect the neck.

You can see the difficulty in finishing from the back in these three matches.

This match between Andre Galvao and Chael Sonnen, Andre takes the back with 8:45 left on the clock, he stays there attacking for over 2:30 unsuccessfully  before rolling on top in back mount and finishing immediately.

This was Marcelo Garcia’s one and only venture into MMA.  Marcelo is considered one of the all time greatest in Jiu-Jitsu and by some the best ever.  He’s also known for his ability to finish from the back position.  As you can see in his mma fight he managed to get the back position and stay there for almost 3 minutes in the match without being able to secure the choke.

The most recent example is Kron Gracie’s fight with Hideo Tokoro.  Kron was able to take the back position a minute and a half into the match, after two minutes there Hideo was able to turn into the guard. Kron did a great job defending from punches and trying to set up an arm bar but Hideo was able to slip out and throw some massive punches.  Kron did a great job defending and thank God he didn’t get hit because one of those shots could have ended it.

At about the 4 minute mark in the match Kron secures the back again, a minute and a half later Hideo again escapes and turns into the guard where Kron was able to avoid some punches and attempts to head stomp and Hideo eventually attempts a foot lock allowing Kron to escape and get on top.  Again Kron takes the back with 2 minutes left in the match, unable to finish Kron finally takes the mount with 35 seconds left in the first round, and with punches forces Hideo to turn belly down and from this position he is immediately able to secure his choke and win with 17 seconds left in the round.

Obviously in MMA things are different with the gloves.

There are many other examples of this happening in MMA and no-gi competition but I use  Andre, Marcelo and Kron as examples because they are considered the best of the best when It come to our art, and in preparation for the mma fights I’m sure Kron and Marcelo trained for months with the gloves on to get used to the feel.

Also I don’t think many would consider any of their opponents equal level in grappling by any means, yet Chael, Hideo and Dae Won Kim were still able to defend against a far more skilled grappler. It wasn’t until Kron and Andre achieved back mount that they were able to finish.

The lesson to take away from this is that most people think if we are able to take the back, the fight is as good as over, in reality, finishing from that position can be extremely difficult even for the best jiu-jitsu practitioner.  Remember how we train is how we will react in a fight and in the environment where strikes are involved most times its better to get on top and stay on top.