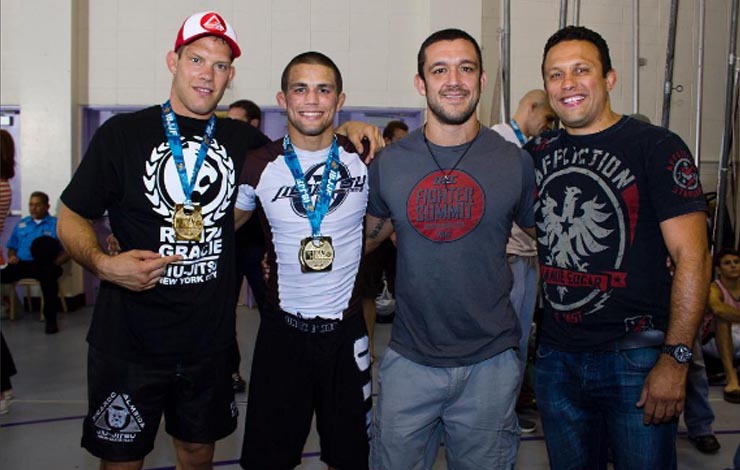 In many ways Mixed Martial Arts amount to achieving a good balance in your training. It’s crucial to balance out good striking, wrestling as well as ground game.

While some believe that high level jiu-jitsu is not the best predisposition of success in the octagon, no jiu-jitsu is a certain recipe for disaster.

Feeling like ‘Homer’ tagging along for this Epic Odyssey! Much respect to their opponents this weekend but I would have bet on Frankie and Eddie vs Hector and Achilles! #warriors #legends #hometeam @mark_henry7 @renzograciebjj @frankieedgar @ealvarezfight #ufc #ufcfightnight #ufc200 #mma

When prompted as to why this might be ocurring Ricardo offers his unique point of view:

“Every time the UFC is on so many people gather together to watch it. Such an awesome activity. Such an awesome sport. Guys get in there and put their physical welfare on the line. They fight so hard and we all love the sport.”

But this is where a separation occurs:

“How come that so many people are watching it but are not practicing it? I really believe people love the UFC they love the MMA with a remote control in one hand and a beer in the other. But they don’t necessarily associate training martial arts with  a great activity for them. And I think us from the jiu-jitsu community are very well positioned to change that image. “

In Almeida’s words it’s as easy as making jiu-jitsu more approachable. The unique experience of jiu-jitsu does not come at a price of brain damage and as such it’s better for someone whose interest is purely recreational.

So how can we have more people involved?

“For the kids jiu-jitsu teaches anti-bullying, they’re battling childhood obesity, creates healthy habits. For the parents, it’s gonna give you an incredible medium to relate to your child. “

Almeida relates this by sharing how jiu-jitsu has helped him interact with his autistic child.