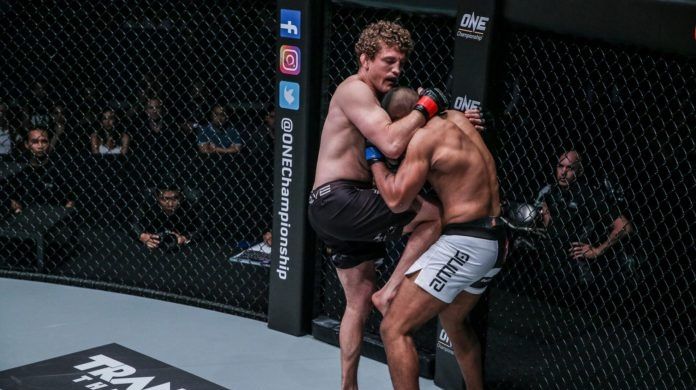 The clinch is a common position in BJJ, MMA, and self-defense situations. Generally speaking, the clinch is a position in which two standing individuals have grabbed ahold of one another. In MMA and self-defense situations, a fighter may either throw strikes from this position or take his or her opponent to the ground. In grappling sports like BJJ, however, strikes are forbidden, leaving takedowns as the preferred method of attack. Regardless of the situation, the individual involved in a clinch must always seek to maintain control of his or her opponent, and executing a takedown is an excellent way to accomplish this.

While many arts focus on both the clinch and takedowns, there are three that place particular emphasis on these skills: Greco-Roman wrestling, freestyle wrestling, and judo.

Freestyle wrestling, as opposed to Greco-Roman wrestling, allows participants to complete takedowns using both the upper and lower body. While this style of wrestling, which is practiced in the NCAA, is famous for its use of leg-based takedowns, it also employs a number of clinch techniques that have been utilized in MMA and BJJ.

Judo focuses primarily on manipulating the upper body to throw opponents to the ground. Its repertoire includes techniques such as hip throws, trips, foot sweeps, and clinch takedowns. The primary difference between judo and Greco-Roman wrestling is judo’s use of the gi. However, a number of professional fighters have successfully utilized judo techniques in MMA competition.

Advantages of Clinch Takedowns for Self-Defense

Experts agree that a large percentage of self-defense situations involve the clinch. When attacked, even untrained individuals instinctually attempt to grab ahold of their attackers in order to prevent further aggression. In addition, attackers often attempt to grab their victims and throw them to the ground after surprising them with strikes. It is for this reason that all martial artists should develop a variety of clinch-fighting skills, including strikes and takedowns. The ability to close the distance and clinch one’s opponent in a self-defense situation is beneficial for a number of reasons, including:

Given the multiple benefits of a solid clinch game, it is imperative that all students devote a portion of their time to training from this position. The following techniques employ elements of all of the above arts and are useful in both competition and self-defense situations.

An effective and easy takedown from the clinch is the valley drop. The nice thing about the valley drop is that it doesn’t require much skill to execute, and even beginners can master it in a short period of time. The technique, which utilizes leverage, gravity, and body weight, is performed by clinching, falling, and turning into one’s opponent. In order to execute the valley drop, follow the steps below:

1) From the clinch, pass under and around your opponent’s arm.

2) Grip your opponent’s waist from behind.

3) Drop your hips and press your head against your opponent’s back, facing the direction of your intended takedown.

4) Straighten your leg, and place your foot behind the heel of the opponent on the side of the intended takedown.

5) While maintaining your grip, fall to the mat while turning into your opponent.

As noted above, an opponent may occasionally try to put you in a Thai clinch, even in situations where striking isn’t involved, as there are a number of takedowns that can be executed from this position. It is for this reason that it is important to have ways to counter the Thai clinch. One such way is with the following takedown, which is done as follows:

1) When caught in the Thai clinch, bump your opponent’s arm and shoulder upward in order to slide around his body and reach for his far side.

2) After attaining this grip, position yourself in front of your opponent’s body.

3) Place your outside foot in front of your opponent’s centerline, and turn to face in the same direction as your opponent.

4) Standing in front of your opponent, extend your foot around his or her outside leg.

5) While kicking your leg backward, use your hip to throw your opponent over your extended leg.

Takedowns are an important part of the martial arts, and they should be practiced regularly. After all, all fights begin on the feet! So, whether you are an experienced grappler or a beginner, make sure to dedicate at least a portion of your training time to developing a solid takedown game.