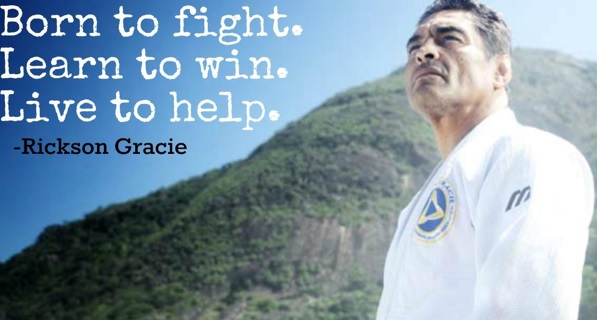 For people like me, who enjoy the Joe Rogan Experience podcast and love Brazilian Jiujitsu it has always been a treat whenever Joe invites people who have extensive martial arts background and we can listen to their stories and opinions. He has had multiple podcasts with Eddie Bravo, Josh Barnett, Brendan Schaub, one with Kron Gracie, even with Dana White, Tito Ortiz  and other relevant figures involved in combat sports or the UFC in some way or another. This led us to the 524th episode of the podcast featuring the man who many believe is the Superman of the Brazilian Jiu Jitsu, Vale Tudo and No holds barred fights– Grandmaster Rickson Gracie. Nothing up until this moment has ever been even close in my opinion, just because of the sheer elusiveness and aura of this man.

If you are reading this there is no point for me to get into who Rickson Gracie is and what  he has achieved during his wild career. If you are not familiar and you are into combat sports…you should rectify your huge mistake at once! Lately it has been pretty tough to find some new material on the iconic figure that is Rickson. A few short clips of him commenting something about rules, competitions and Jiu Jitsu lifestyle and that was just about it. A few days ago we all found out that he is launching a new Brazilian jiu jitsu federation called Jiu Jitsu Global Federation (JJGF). Since Rickson is such an immensely important and beloved figure in the community, word picked up quickly and people started researching and paying attention to what he is developing. Him actually being on the podcast is a dream come true to so many people that have been asking for an opportunity to listen to what he has to say about the days of Gracie Challenges and about where the sport is heading nowadays. As it happens Joe’s podcast is generally about three hours long, so there was time for him to touch on both topics. 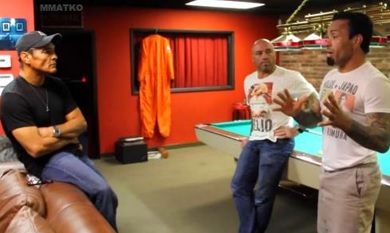 The first thing that I noticed, was that when Eddie and Joe were in the presence of Rickson, they were such awe that even for Bravo, who sometimes talks so much that it’s hard for the others to say a few whole sentences, felt that this was a moment when he needed to absorb everything that he could. We all felt like little children on Christmas I think. The listeners got exposed to a well of knowledge so deep, that you needed to press the pause button in order to try to understand what exactly Rickson meant and what is his point. The way he speaks, his comprehension of action and reaction, of weight distribution, clinching, his “invisible jiu jitsu” aspect combined with the fact that he has never lost a fight, is so complex that your mind immediately gets a taste of why he has been such an enigma for such a long period of time, almost wrapped in a cloak of mystery.

Joe and Eddie had a lot of questions about what makes Rickson himself. Why, in his opinion, has it turned out to be so, that whoever trained with him, would always come to the conclusion that he is on another level. Rickson says that he never chose to be “the one”, the person who had to represent Jiu Jitsu. This was something that happened on it’s own and that he felt it as a privilege and a great responsibility. Then of course they went back in the days, talking about some great stories like the Yoji Anjo and the Takada fight, but the thing that got me was that Rickson wanted to discuss the future more than talk about his past accolades. This just shows us what kind of a man he is. Not satisfied with bathing in his own glory, but looking forward to whatever challenges lie ahead and doing the most that he could do to help the Brazilian Jiu Jitsu community.

In the past few years there have been lots of debates about what has become of the so-called “best self defense martial art”. For me, the fact that this is even being brought up in discussions after what the Gracies have managed to prove in events all over the world, is a sign that something has to change. Some people say that it used to be efficient but because of the way that it is being taught nowadays, the usefulness  has significantly diminished. Others point out, that on the top levels, like the UFC, we are not witnessing high level Jiu jitsu because it is far easier to learn how to defend and neutralize the attacks, than to invest the time in training to be a submission artist. Some have even stated, that the overall level in the UFC regarding BJJ skills is purple belt.

The listeners could witness how that kind of talk does not sit well with Rickson, as he says himself. It is a scary thing when the most renowned member of the Gracie clan says that sometimes there is nothing more boring to him than watching a Brazilian jiu jitsu fight. So it looks like he is taking a step towards improving some of the situations which make the sport lose credibility. He makes a point that our community is losing effectiveness in real life situations. This has much to do with the fact that competitors are winning world championships with a strategy which Rickson calls “anti-jiu jitsu”. I have heard Andre Galvao use the same term. The basic explanation of it is simply stalling, blocking the other persons attack and wining by advantage without ever taking the risk of moving in order to improve your position or try to submit your opponent. So basically when the people who are used to win championships using these methods, open their own academy they will pass on to the new generation the same knowledge and mindset which made them champions. Rickson is targeting mainly the future of the sport – the white and blue belts who are just starting and who’s minds are still unstained with the fact that winning a tournament is the most important thing in your development. Under the right leadership this can in some ways revive the sport and make BJJ practitioners hunt for submissions and finish fights more, which will no doubt lead to the sport being more interesting for the masses.

Rickson’s goal in his new venture is not only to improve Jiu Jitsu by restoring effectiveness , but he is aspiring to bring the community together using a state of the art platform, which will keep track of all tournaments being held (helps with finding sponsors), all academies and their members will also be present in it. The idea is to have an open communication where nothing is set in stone until it is agreed upon and all rules and ideas are opened to discussion with the Masters council. The list of the council is quite impressive and some of the people who have been invited are : Renzo Gracie, Relson Gracie, Pedro Sauer, Carlson Gracie Jr., Carlos Gracie Sr.; Rigan, Carlos and Jean Jacques Machado, Royler Gracie, Fabio Gurgel, Sylvio Behring and other well-known names in the BJJ world scene. Rickson even invited Eddie Bravo to work with him on developing the rules and and helping the federation grow. After so many years of people trying to discredit Eddie and what he is trying to do, here comes the greatest Brazilian Jiu Jitsu fighter of all time and acknowledges that Eddie is just trying to help the sport. Talk about ultimate gratification right there. Tells you what kind of a person he is.

In a time when fighters went into a tournament, not specifically preparing for one single opponent but they had to be ready to fight three or four times a night with sometimes no time limit, Rickson managed to make a legend of himself and to showcase the effectiveness of Brazilian Jiu Jitsu in Vale Tudo and MMA tournaments across Japan and Brazil. The people there loved the idea of a few men participating and only one coming on top, they find the finality of it all very exciting.  It was a great pleasure listening to this podcast as it showed us how Rickson thinks and lives his life. He mentions that in days which he had to fight, he thought that it would be perfect for him to die this day representing his family and mission and talks about the philosophical part of it all. I believe he uses these strong words to present his spirit and mindset – the fact that he is not going to be the one who quits. This may sound very poetical but the fact of the matter is that he accomplished his goal. He has had a huge influence on so many people and has been and still is a great role model. What we learned in the final minutes of the podcast is that even if you are a living legend, you still continue seeking what your heart desires and never stop because you feel you have done enough. Rickson gives us an example. He says that when he was younger he felt that either you were a courageous man who stood up and fought for what he believed in, or you were a coward not tough enough to stand for something. But as the years have passed and times have changed, he understood that the opposite of fearlessness is conformity. He teaches us that you should never be afraid to go after the thing you want no matter what you have to sacrifice because we all have limited time on this earth. I am proud to be in a community with such extraordinary people as Rickson Gracie and many others who’s influence undoubtedly inspires us to achieve our potential in life.