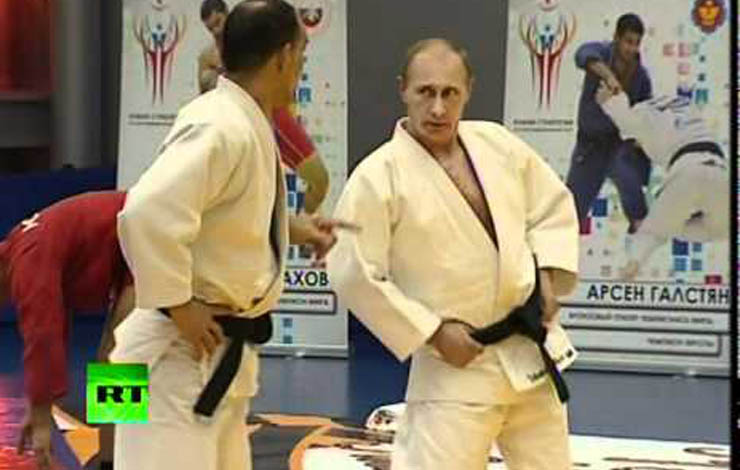 Vladimir Putin has always had a carefully crafted hyper masculine way of representing himself. His martial art skills are always fawned upon in Russia media however a report recently surfaced in Washington Post questioning those reports.

When they say fawning they point to videos such as this one:

“Russian President Vladimir Putin showed off his legendary judo skills as he sparred with the Russian national team and its head coach Ezio Gamba. Putin, a black belt in the sport, was taking part in a session in the southern city of Sochi on Friday.”

His alleged martial arts prowess certainly fits with the machismo he projects to the world — a perfect complement to the portraits of him posing shirtless in military fatigues and the tall tales of him wrestling bears and felling Siberian tigers with tranquilizer darts.

But is Putin really the master he’s made out to be?

No, says Benjamin Wittes, the editor of the national security blog Lawfare.

Wittes, who happens to be a martial arts aficionado himself, has chided Putin as a “fraud” and a “phony” and is trying to call his bluff by challenging the Russian strongman to a fight in any location where Putin lacks the authority to have him arrested. 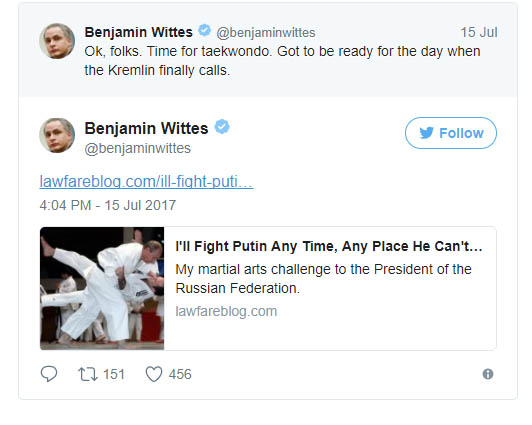 47 Year old black belt in taekwondo and aikido goes on to claim many of Putin judo videos are faked.

Wittes says Putin’s partners drop to the floor all too easily.

“At least in the videos I have seen, there are no committed attacks on Putin, and I see no evidence that his opponents are ever trying to get the better of him,” Wittes wrote on Lawfare. “The videos are demonstrations in which he shows off his masculine prowess with them taking what the Japanese call ukemi (defensive falls) for him.”

In a Facebook post titled “Why Won’t Vladimir Putin Fight Me?,” Wittes put it more bluntly: “Putin is fraud martial artist. He only fights people who are in his power, and they are all taking falls for him.”

In a 2001 interview with NPR Vladimir Putin, he described his lifelong love of both sports:

I started practicing this sport when I was 14, and as a matter of fact, what I did start engaging in was something called sambo, which is a Russian acronym for, quote, “self-defense without arms,” unquote, which is a Russian wrestling technique. And, after that, I joined a gym that was teaching judo. And I was what they call a master of sports. We have our sporting ranks, and the equivalent of the black belt I received when I was, I guess, 18, in judo. And all my adult life I have been practicing judo — I guess I can put it this way — and I do love the sport tremendously. And I think that there is more to it than just sport. I think it’s also a philosophy in a way, and I think it’s a philosophy that teaches one to treat one’s partner with respect. And I engage in this sport with pleasure and try to have regular practices still. Yes, still.