Victor Hugo ‘The Mountain’- The Next Big Thing in Jiu-Jitsu 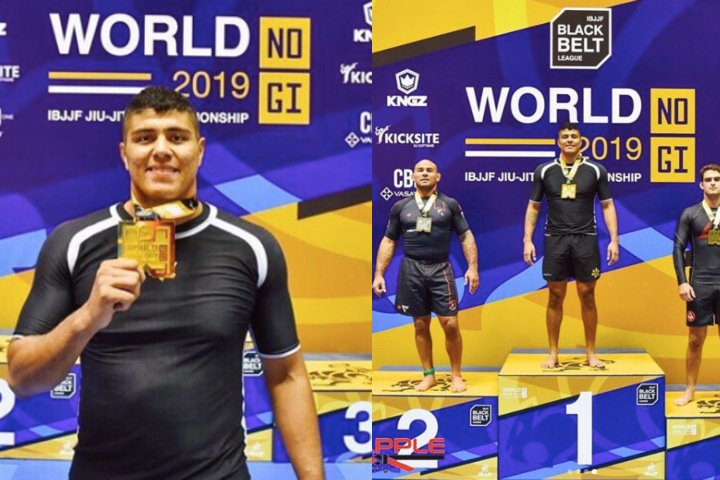 In 2020 we`ve seen many new names emerge in the BJJ competition scene, but the one fighter that has stood out and deserves to be called “the next big thing” has be the Six Blades representative Victor Hugo. The 23-years old prospect is undefeated this year and has made it very clear that he is ready for the big game in just two years as a black belt. Despite his major success, Victor is known for his humbleness and “Bushido” attitude which can be a consequence of the years spent under the guidance of the prominent Ribeiro Brothers and Rafael Lovato Jr. If you open up Victor`s Instagram account you won`t see a list of achievements on top, but a simple “I do Jiu-Jitsu”. Let`s dive deep into the not so long, but very successful career of Victor Hugo, so we can understand who he is as a person and as a fighter.

Victor is called “The Mountain” as he is one of the biggest and tallest active BJJ fighters today. He is almost 2 meters tall and weighs around 115 kg. He has always been one of the bigger kids growing up, but he felt like he lacked athleticism. He played a number of sports, from football to basketball, swimming, judo, but never really fell in love with any of those. Then he found out about BJJ in 2011. Victor`s father found out about a local BJJ club that opened doors recently and decided to join the club and push his son to train with him. Victor got hooked on grappling pretty quickly as he realized that athleticism and natural skills are not a necessity to be a champion in this sport.

Happy Father’s Day everyone , I’m very grateful and lucky for my dad got us starting at Jiu-Jitsu which eventually became my profession. To all my friends who are father’s enjoy your day! _ #fathersday #bjj

Joining the University of Jiu-Jitsu

Up until 2016 Victor represented Day Bu Kan Academy (DBK) and trained under the instruction of coach Ricardo Costa. That`s the year in which he first visited the United States of America and got in touch with the Ribeiro Brothers. After his outstanding performance at the IBJJF World Championships in which he double golded at purple belts, he was offered a full scholarship at the University of Jiu-Jitsu. Victor had just taken up his college education, but without hesitating too much he decided to devote himself to BJJ and joined the Six Blades team.

As Victor was now coached by one of the GOATS in BJJ and was able to compete regularly in the US, he began racking up wins and gold medals from championships. He quickly turned out to be one of the hot prospects in the upper weight classes winning 5 more IBJJF World titles, 3 European titles, 3 Pan-Ams titles and 3 Brazilian national titles. In 2019 which was his last year as a brown belt he double golded from all four aforementioned major tournaments. He also made an impression at invitational tournaments like Spyder Invitational and Copa Podio where he faced other future champs like Tommy Langaker, Fabio Alano and Kaynan Duarte. All these achievements in such a short period left the Ribeiro Brothers no other option, but to award Victor a black belt and throw him into the wolves. But he turned out to be wolf himself.

DOUBLE GRAND SLAM 2019. 🥇🥇 Europeans 🥇🥇Pan Ams 🥇🥇Brasileiro 🥇🥇Worlds . Encerro esse primeiro semestre de 2019 com 8 ouros nos maiores torneios , e nenhuma derrota,como já disse sigo invicto dentro da minha divisão de PESO desde a faixa azul , e como roxa e marrom estive em todas as finais de absoluto exceto o pan do ano passado… Fico muito feliz com esses resultados e me sinto pronto e muito motivado pelo que a frente!. ••• … I close this first half of 2019 with 8 golds in the biggest tournaments, and no defeats, as I said I am still undefeated within my (IBJJF)WEIGHT division since the blue belt and as purple and brown I have been in all the absolute finals except the pan of the year past … I am very happy with these results and I feel ready and very motivated for what’s next!. ••• … @ribeirojiujitsu @ribeirojjlajolla @unijjsd #flowpressurefinish #goldisintheheart #6blades #jiujitsulifestyle #1

First year as a black belt

Victor debuted as a black belt in the second half of 2019 and ended the year with a bang. After winning the ACB World Championship and the Abu Dhabi Grand Slam Moscow he was invited as a last-minute replacement at ADCC Worlds where he defeated the seasoned vet Jared Dopp. He then fought the great Marcus Almeida Buchecha and stood pretty even with him until he got his guard passed. His solid performance inspired him to pursue success at the No Gi circuit and he got what he wanted right in the end of the year at No Gi Worlds.
He made an incredible run at this elite competition defeating Manuel Ribamar, Aaron “Tex” Johnson, Vinicius Trator, Marcelo Gomide and submitting the legendary Roberto Cyborg in the final of the absolute division. Early in that final bout Victor put Cyborg in one of his favorite positions 50/50 and made Cyborg tap with a nasty kneebar. That evened the score between them as Roberto defeated Victor via advantage in the semi-final of the Ultra-Heavy division just hours before that. This win really put his name on the map and made the BJJ fans around the world notice this promising athlete.

That’s my nature as a martial artist , a finisher. … #flowpressurefinish #VH

Victor stayed active during 2020 and despite the ongoing pandemic his performances just got better and better. He has 10 wins in 10 fights and looks unstoppable. In mid-2020 he was ranked as the Number 1 pound-for-pound Gi fighter in the world by FloGrappling and he might just have proved that with his wins over names like Nicholas Meregali, Felipe Andrew, Roberto Jimenez, Gabriel Almeida. The Brazilian fighter was also crowned with Fight 2 Win and Third Coast Grappling titles.

He opened up the year with a decision win over the very tough ADCC silver medalist Nick Rodriguez, but his win over Nicholas Meregali with 2-0 at Who`s Number 1 once again made the whole world look at him. He has 50% submission ratio at black belt and most of his submissions come via leglocks.

Victor does not plan on stopping now as he has signed up for the Ultra-Heavy division at the first major IBJJF event since March – the Pan-Americans. Another big name that has signed up in his division is Max Gimenis from GF Team who already has been tapped out by Victor at F2W 148. Kaynan Duarte, Leando Lo and Patrick Gaudio are unable to register and it seems like the few grapplers that might make Victor sweat in the Open Class are Keenan Cornelius, Vinicius Ferreira, Roberto Jimenez or Felipe Andrew. So far he has beaten three of those fighters, but he hasn`t clashed with Keenan Cornelius on the competition mats. A matchup with the lanky technician Keenan Cornelius could potentially be a barnburner and the most exciting match at this year’s Pan-Ams. Victor`s well-rounded game can cause trouble to the Lapel Master. Hugo can be very dangerous from bottom with his phenomenal footlocks from 50/50 guard and explosive stand-up sweeps. When he gets on top he is a ferocious passer and his takedown game is also very high-level.

If “The Mountain” finishes 2020 just as he finished 2019 or even better, he will definitely gain a superstar status. At this young age Victor might not have peaked physically and technically and we can safely say that he is yet to show his full potential. He is not a trash talker, but he is confident and has expressed his “I don`t care who you give me” attitude in post-match interviews which combined with success on the mats can turn him into the biggest star in BJJ today.