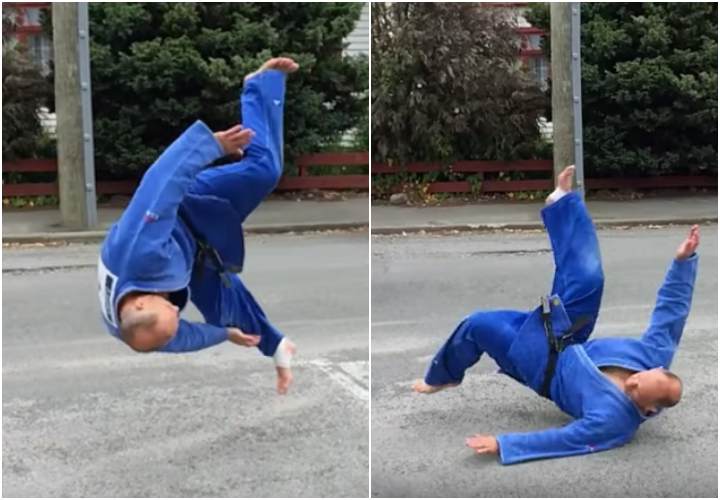 Believe it or not, wrestling is the most dangerous aspect of MMA because most injuries happen as a result of falling body weight. People who have trained judo, wrestling or sambo have a better understanding of how to fall down properly, and that makes them less likely to get injured in that manner, but still, it sometimes happens. It cannot be totally avoided, but it can be minimized if you know what you’re doing.

BACKWARD ROLL OVER THE SHOULDER

Next, we have the backward roll over the shoulder which is easier than doing it over the head. Get your head to one side, look to the other side and roll over it. This version is easier to do then the next one.

BACKWARD ROLL OVER THE HEAD

Before we proceed with the proper forward breakfall, we should practice it from a lower hight. Start from your knees, get your arm under the armpit and roll over it. It should be done very smoothly and gently. It shouldn’t be uncomfortable at all. Don’t hit the shoulder or land forcefully. Don’t make any sound.

Forward breakfall is done by rolling diagonally on your back, not straight. This is crucial and it’s the difference between the forward roll and forward breakfall.

Then get up on your feet, place one arm on the floor, the other goes under the armpit and you do the same thing as before.

Then do it from standing tall. No jumping just yet. You can either finish by getting up or by staying down. This time use the other arm to break the fall by hitting it on the mat.

This is the same as the previous one, but you don’t use the arm to slam the floor to break the fall. This one is great for hard surfaces like concrete and is used often by Parkour practitioners. Especially when landing after the big drops.

Place the palms close together and just roll like you would in a normal forward breakfall. This time you will not use the arm to break the fall.

Backward fall is almost like backward roll over the shoulder, but you also slam with the arms to break down the fall. Start in a crossed-arms position, similar to Dracula lying in the coffin, squat, roll, slam with the arms at a 45-degree angle to the body and complete the roll.

When you master this version, you can proceed to the jumping one. Make sure you break the fall with your arms before your back hit the floor. Otherwise, it will hurt.

When doing a sideways fall, squat with one leg and slide sideways with the other as if someone has swept your foot. Break the fall with the arm and roll backward.

This can also be done without the roll. Either by staying on the ground or by getting up using the technical stand up.

Then try the forward breakfall over some obstacle. In this case, I’ll be using my student Marko to show you the progression.

First, jump over while his lying down.

Then when he’s in turtle.

And finally to stand up and lean forward.

You can even make this harder by making him stand up more or by jumping over more partners.

Here is some additional info on how to breakfall:

Usually, it is not a good idea since you can get injured, but there are exceptions. You could do it if the throw is not very forceful or if you possess very good takedown defense skills. Other than that – don’t do it. Instead, start with the post but turn it into a roll by tucking in your elbow. That way you will lessen the impact by posting and you will prevent the injury by continuing to roll.

KEEP THE CHIN TUCKED IN WHEN FALLING DOWN

All grapplers have this instinct and it will save you from hitting the mat or the floor with the back of your head.

I come from a judo background where we have been thought proper breakfalling techniques, but when it was time to compete, all of that flew out the window because the point was not to fall down or to fall down with as little force as possible thus giving away fewer points. This is schizophrenic since you were told not to fall down at all cost, even landing on our heads instead of the back, which sometimes leads to injuries.

In MMA the fight doesn’t end with a takedown, so you don’t have to do all these crazy things to not get taken down. Defend it with all you have of course, but if the takedown is inevitable, don’t risk injury by doing something stupid.

Some of you might know my thoughts on Aikido, which are quite negative and you can watch the video Aikido vs MMA. But when it comes to breakfalls, they are really good at them and it’s the only useful thing about this so-called martial art.

Do you know how to breakfall?

Do you think that breakfalls are important in MMA, and do you train them? Let me know in the youtube comments.