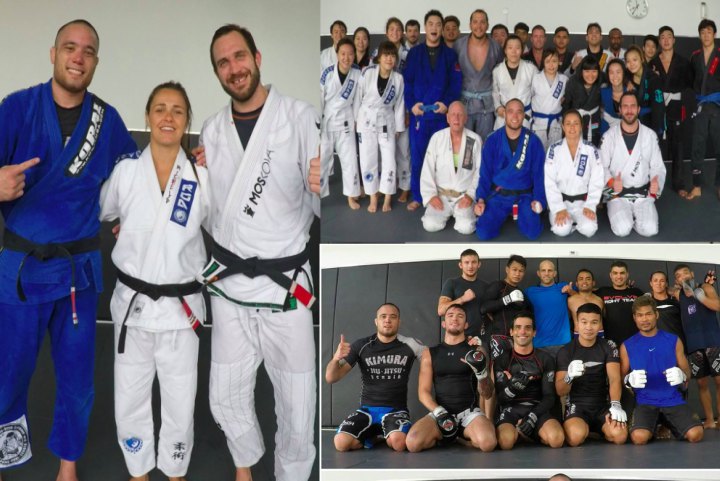 I’ve just came back from an amazing two week long vacation in Singapore. This was my third time visiting this amazing city state and this time I brought my wife and 3 year old daughter with me as we visited my sister and her family who have been living there for 15 years already.

Since I’m a full time BJJ professional (BJJ instructor and editor of BJJEE.com), I wanted to continue my training while on vacation and what better place to do it than the  prestigious Evolve MMA Academy.

I contacted Evolve by email beforehand and they signed me up with their Evolve Vacation Program which offers travelers the rare opportunity of a lifetime to combine a tropical vacation under the sun with authentic training under World Champions.

Evolve MMA ranks amongst the most beautiful BJJ and MMA academies in the world:

BJJ Heaven: Most Beautiful BJJ Academies in the World (2016)

I made a 3 episode VLOG that covers my time training in the 3 Evolve locations around Singapore: Evolve Far East Square, Evolve Orchard central and Evolve POMO.

Since I was there with my family, my days basically consisted of going sight seeing and shopping with the family during the day and training at one of the 3 Evolve branches either early morning or evening. Sometimes I actually trained twice a day. The fact that Evolve has so many BJJ world champions teaching there such as 8x world champ Michelle Nicolini, Leandro Brodinho, Teco Shinzato, Almiro Barros, Shinya Aoki, Bruno Pucci, Alex Silva, Eduardo Novaes, Guli, Gamal, 10th planet black belt Rick Marshall etc…was a huge plus factor for me training there and learning some new techniques and concepts.

Singapore can be a very expensive city but I was surprised at how cheap the taxis were here. There is also even cheaper and cleaner public transport. It is by far the safest and cleanest city I’ve ever been to. Once, I actually forgot my shopping bags in front of a store for 10 minutes in a shopping centre and nobody touched them. Food was reasonably cheap as long as you don’t go to fancy restaurants.

The atmosphere at training was fantastic. Everybody was so friendly and asking me a lot of questions about where I came from and they were all big fans of bjjee.com. All the world champion instructors were extremely friendly and smiling and I had the chance to roll with all of them. Their instruction was top notch and I took home with me some new details, concepts and drills that I’ll be teaching my won students. 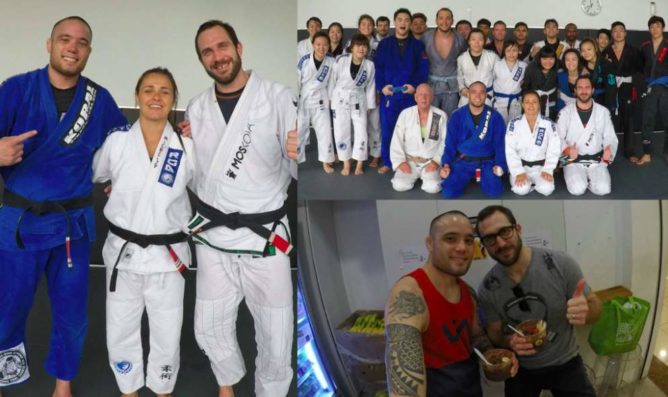 ingapore: Met up with my good friend Swiss BJJ black belt Jean-Marie Lagier and we trained at 8x world champion Michelle Nicolini’s class at Evolve MMA. We then had an Ossome Acai.

I had the honour to roll with 8x world BJJ and ADCC champion Michelle Nicolini. She has flawless Jiu-Jitsu and can defeat a big size and strength difference with her vastly superior technique. *For those that think a man shouldn’t tap to a woman, let me remind you that Michelle is an ELITE level BJJ competitor and that I’m just a regular BJJ black belt. Also this is a training roll so she wasn’t going 100% competition mode and neither was I. In any case her technique is in a different world than mine, and I appreciate that she took her time to roll with me. I learned a lot. Thank you Professor Michelle:

There were up to 5 BJJ classes a day in each branch from early morning to late evening so that meant that I could catch a class whenever I had any free time. I would just hop into a cab and head to one of the 3 locations which were from 5 mins to 15 mins from Orchard road were I was staying.

During my time there I got to train in the BJJ classes, the MMA class lead by coach Heath Sims (former wrestling Olympian, and Team Quest head coach), 10th planet Jiu-Jitsu class by Eddie Bravo’s black belt Rick Marshall, and No Gi BJJ class led by Michelle Nicolini. 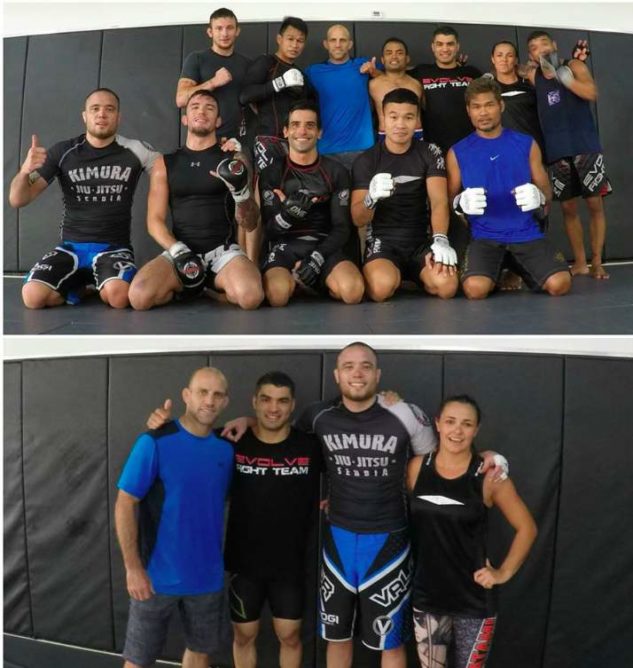 I became good friends with all the students and instructors and will be keeping in touch with them through Facebook. Next January my wife and I have decided to come back again to Singapore.

This was a perfect way of spending a nice relaxing vacation and get some world class training. I strongly recommend everybody to check out the Evolve Vacation Program. You can train at one of the world’s most famous mixed martial arts academies, Evolve MMA, and also enjoy the exotic hidden treasures of the beautiful tropical island of Singapore.

Check out the VLOG to enjoy the whole experience: