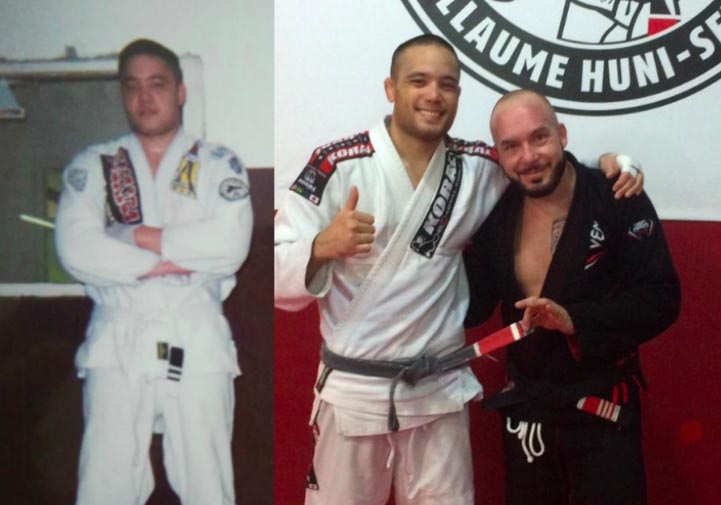 If I ask 100 students, “How long would you like to train jiu-jitsu?”
The majority will answer, “Forever.”
If we ask 100 black belts, “What percentage of white and blue belt students on any given mat, will be training jiu-jitsu in 10 years?”
They usually answer 1%.

When you start Brazilian Jiu-Jitsu, you look at black belt as the goal. What many do not realise is that black belt is not the end. It is merely an important station on the long Jiu-Jitsu ride. Jiu-Jitsu is a tough martial art/ sport and there is a very high drop out rate. The truth is the highest drop out rate is from white to blue and again from blue to purple. If you can make it to purple then there is a very good chance that you will make it to black belt and beyond. It’s a known fact that after attaining the BJJ blue belt many people eventually drop out of BJJ. It may be because of a drop of interest after attaining a first goal, life getting in the way or some other reason.

I’ve been training BJJ for 18  years now. When looking back at all the people that have trained in those 18 years (where I’ve been in many different countries), I can count on both hands the number of those that have made the cut to BJJ black belt. When you look at the numbers, it amounts to between 1 to 0,5 % of people that started training ending up getting a black belt. This article highlights the main reasons why people quit Jiu-Jitsu and looks at how to be consistent and go forward in your Jiu-Jitsu journey.

Not everybody has the passion and love for Jiu-Jitsu. Think about the time when you started training Jiu-Jitsu. Out of all the people who started training at the same time as you, how many are still here and training regularly? Chances are that you have a lot of people coming in training a few months, maybe even get promoted to blue belt and then suddenly disappear. Of course Jiu-Jitsu is not for everybody.

My case is different as when I first started training many years ago, I fell in love instantly and I knew deep inside that no matter how long it would take me, that I would train Jiu-Jitsu for the rest in my life and that getting a black belt (and even more) would be a certainty. In those 15 years, I lived in 6 countries because of my work. Some of those countries did not have Jiu-Jitsu or any other grappling art available. You know what I did? I had some mats made and started teaching my office mates. In some other countries, I trained Judo. I never gave up on my passion.

When you don’t have the passion for Jiu-Jitsu then other things take over and will lure you away. This can be travel, social life, work, family etc..Think about it like this: How many times have you taken up a gym subscription and ended up just training regularly for a month before you found it boring and quit? Well it’s the same for those people that start Jiu-Jitsu and quit. Their motivation was not strong enough.

When you really have the passion, then you will always find a way and make it a point to keep training even if you have other preoccupations (Family, career, social life etc..). You may take a break but you can always go back to Jiu-Jitsu. At the end of the day, Jiu-Jitsu is not a race, it’s a journey.

You can’t fake it in Jiu-Jitsu. The long hours spent live rolling means that you can openly test the effectiveness of your skills against a resisting opponent.
Going through the ranks is a long and tough process which weeds out the people who are not 100% committed to to Jiu-Jitsu. Ego plays a big part in people quitting Jiu-Jitsu. It takes a special kind of person to take so much of a mental and physical beating and keep training Jiu-Jitsu. If you compete a lot, then you will end up losing. If you roll with good people, you will get tapped. That is is a certainty. Some people get to blue belt, then take a 6 months break. When they come back, they get dominated by the ones that were beginners the year before. How you take those losses will depend on your ego. Some people can’t take it and end up quitting and some will learn and improve.

As a brown belt, I once was submitted by a blue belt and a white belt in the same tournament. Yes I know. It’s shocking. I had a bad day and they were very good, and had also beaten other higher belts. It was a disaster. It happened in front of my team mates and instructor. Some people would have stopped training or stopped competing as result of such a loss and hit to their ego.. Not me. Never. I analysed my mistakes and came back stronger. 7 months after those losses, I won a bunch of local tournaments and a bronze medal at the IBJJF Europeans at brown belt master 1. The situation in some countries regarding Jiu-Jitsu is so bad that some end up quitting or switching to other sport with less drama.

Some beginners also join a team with an instructor that doesn’t give them any attention or where there is a bad atmosphere in the academy.

You can get injured doing anything. Injuries do happen in Jiu-Jitsu and that is a big cause of people quitting. I’ve trained BJJ for 15 years and have never broken a bone. My father in law broke his leg skiing and another time falling down the stairs. You can do Jiu-Jitsu all your life as it is relatively safe.

Next time you think about quitting Jiu-Jitsu remember this: don’t put too much pressure on yourself. Enjoy yourself. If you think about the belt as a goal, then you are training for the wrong reasons. Train with a goal of constant self improvement. Train jiu-jitsu for life.

Keith Owen talks about goal setting in Brazilian Jiu Jitsu and the most common things that will derail you from achieving that goal: