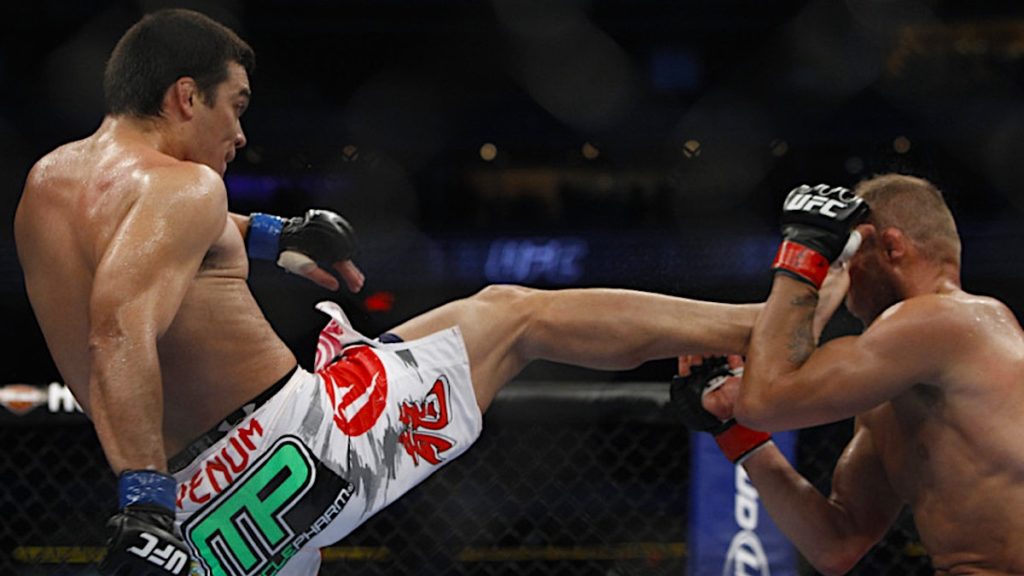 They are spectacular, sometimes wild, but most of the time out of nowhere. We’re talking about the incredible head kick knockout.

Now, there’s plenty of ways to finish a fight in MMA. That’s what makes the sport such a crazy and unique amalgamation of various martial arts disciplines. It’s the purest form of combat sport out there, and as close as it gets to fighting in real-world situations. But the head kick knockout is truly something special.

There are plenty of thrilling head kick knockouts scattered throughout MMA history. It’s hard to pick which ones are the best, because literally every single one of them is immensely satisfying to watch. However, if we were to pick and choose, there are a few that come to mind.

We’ve come up with a list of amazing head kick knockouts to look back on. In no particular order, here are the best of the best.

UFC women’s flyweight contender and Dancing With The Stars alumni Paige “12 Gauge” VanZant was coming off a lengthy hiatus before stepping into the cage against Bec “Rowdy” Rawlings.

Now at first glance, Rawlings may look to some as the more grizzled fighter. She’s covered in tattoos and has a mean look about her. In fact, Rawlings even referred to VanZant as “America’s Sweetheart” in the build-up to their fight, obviously downplaying VanZant’s martial arts and fighting ability.

But VanZant proved that looks can be deceiving, as she silenced the crowd with a second-round head kick KO of Rawlings in 2016. Just 17 seconds into the second frame, VanZant connected on a flashy jumping switch kick that instantly turned the lights out on Rawlings.

In a battle between legends, Lyoto “The Dragon” Machida took on Randy “The Natural” Couture in 2011, and it ended up being one of the most memorable victories of Machida’s career.

Now, both men are considered legends of the sport today. But this moment, in particular, turned out to be Machida’s signature victory. Machida, of course, is famous for his laid back karate stance. He puts opponents in a trance with his uncanny movement, and then strikes at just the right moment to pull off some of the most incredible knockouts we’ve ever seen.

Against Couture, Machida pulled off a spectacular jumping front switch kick to the face. It was very reminiscent of the “Crane Kick” Daniel-san did in the original Karate Kid movie. Couture immediately slumped to the canvas and he didn’t get back up.

Heavyweight legends Gabriel Gonzaga and Mirco “Cro Cop” Filipovic have both had their fair share of scintillating finishes throughout their careers.

Normally, Cro Cop is the one known for his head shattering high kicks. But when Gonzaga stepped into the Octagon with him in 2007, it was the Brazilian behemoth who pulled off a stunning head kick knockout.

Of course, there were those who saw it coming. At the time, Gonzaga had finished all of his fights either by KO or by submission. Gonzaga and Cro Cop were two men who knew not how to back down.

The kick itself was absolute dynamite. It hit perfectly clean and no one, not even the great Cro Cop, could survive a shot like that. For those reasons, it’s one of the greatest head kick KO’s in the history of MMA — one that will live on forever in highlight reels.

Talk about highlight-reel knockouts, the great Anderson “The Spider” Silva’s career is full of them. Ever since he entered the UFC, he was destined for greatness. Silva trampled on many big names in the sport and is widely considered one of the greatest of all time in MMA.

In 2011, Silva faced “The Phenom” Vitor Belfort, a man who was so relentless, and ruthless, he was avoided like the plague. In fact, many fans seemed to think it was Belfort who would be able to end Silva’s reign in the UFC middleweight division.

Belfort was certainly dangerous early and was even able to take Silva down, although he couldn’t keep him down for long. The wild haymakers from Belfort’s end could also seemingly halt the fight if one had connected. But it wasn’t meant to be.

Silva unleashed one of the most amazing front kick knockouts the world has ever seen.

“Groovy” Lando Vannata took on John Makdessi in 2016, his second appearance inside the Octagon after losing an intense fight with Tony Ferguson in his debut. He certainly made sure to come up on the winning end.

With less than two minutes to go in the first round against Makdessi, Vannata executed a wild spinning wheel kick that exploded right on his opponent’s jaw. It was a slight opening that Vannata capitalized on in a mere split second, but it was all he needed. The win earned Vannata a “Performance of the Night” bonus from the UFC.