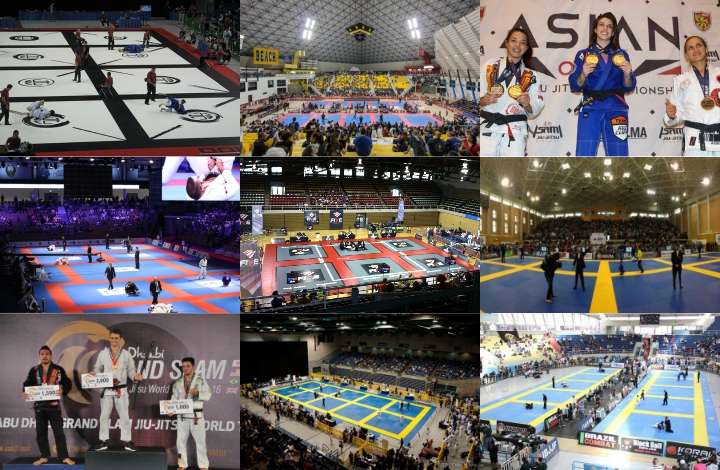 There are various BJJ federations in the world. There are also many BJJ tournaments worldwide. The truth of the matter is, in 2016, in terms of prestige for Jiu-Jitsu (Gi) competitors, 2 organisations stick out high above all others: The IBJFF and the UAEJJF. An honourable mention should also be given to the fast rising Five Grappling, SJJIF, and Jiu-Jitsu World League organisations which organise quality tournaments.

Prize money: Nowadays almost all major BJJ tournaments offer prize money. The IBJJF and the World Pro have offred much more money to their athletes this year. IBJJF has given back to its athletes in 2015 by offerering 4 Pro tournaments with 30,000$Prize money (just 1 in 2013). The IBJJF NY PRO even offered 30,000$ and World Pro has always offered big money (6500,000$ in 2015). 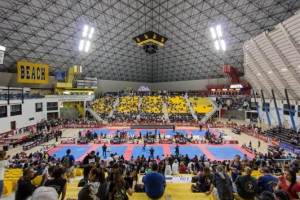 In June 2011 the Sport Jiu-Jitsu International Federation or SJJIF was founded by professors Joao Silva, Patricia Silva, Samuel Aschidamini, Cleiber Maia, Edison Kagohara, and Marcello Rosa. SJJIF hosted its first international event, the SJJIF Worlds, on December 14 and 15 of 2013 at the Long Beach Pyramid in Long Beach, California USA. They believed that by creating this federation it would benefit and enable positive growth of the sport, organize it, and meet the IOC requirements with easier rules and better understanding of the sport by both practitioners and non-practitioners. This federation would also help the growth of the sport by tracking the number of existing participants in the sport and ranking them by their performance in sanctioned events.
The 2015 worlds was held at the Long Beach pyramid (same event location as IBJJF Worlds) and was live streamed for free. It featured 2,500 competitors and over 100 black belts including Keenan Cornelius, Barte Yoshida, Gustavo Elias, Gabriel Arges, Gabriel Moraes, Sean Roberts, Eliot Kelly, Carlos Farias…. 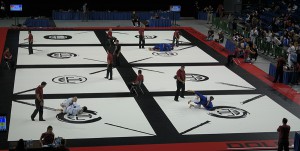 The Jiu Jitsu World League was created by Rigan Machado who stated during that he wanted to professionalize the sport. The tournaments are exclusively in the gi. The JJWL has a 12 city tour and a grand total of $250,000 in prize money. 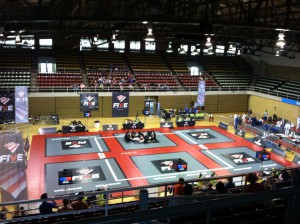 The fast rising FIVE Gi and NO Gi Grappling organization is thinking big .
They have 10 trial competitions throughout North America culminating a invitation only championship at the end of the year. To qualify, you need to place on the podium at any the 10 trials of the year.
Rumor is that Clark Gracie, Mackenzie Dern, Keenan Cornelius and other competitors associated with the FIVE brand will be competing throughout the year in these events. 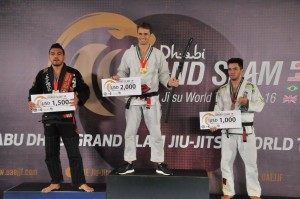 For the 2015/2016 season, the UAEJJF are implementing 4 grand slam tournaments outside the UAE, paying out large cash prizes for each open class, and for the black belt adult male weight classes.
Grand Slams will be held in : Tokyo (already passed), Los Angeles (already passed), Rio de Janeiro and London.

A big effort has been made in production value of these grand slams tournaments.

The Tokyo and Los Angeles edition had free live streaming and were held at prestigious venues.

There is also an official ranking, giving out money to brown/black belt at the end of the year. 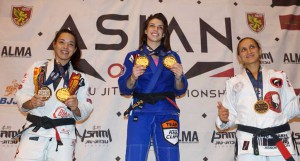 This championship has been held since 2006, semi-annual in Tokyo, Japan, in 2008, the championship flew to Bangkok, Thailand, the third edition of the championship in 2010 was held in Amman, Jordan. It is now regularly held in Tokyo Japan. 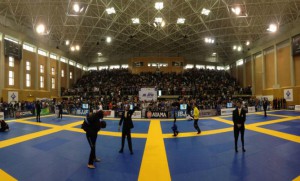 By far the best and biggest BJJ competition in Europe.

In 2015, the European Jiu-Jitsu championships become the world’s biggest BJJ event with 3,400 registered competitors, surpassing the Pan (3,000 last year).
This shows the huge growth of Jiu-Jitsu in Europe as in 2014, there were 2,300 competitors in Lisbon. That’s almost a 30% increase in one year!
The 2016 European Open Jiu-Jitsu Championship will be held on January 20th, 21st, 22nd, 23rd and 24th. The event moved to a new and bigger location, it will occur at the Gymnasium Pavilhão Multiusos de Odivelas, Lisbon, Portugal.
The Pavilhão Multiusos de Odivelas is a multifunctional space that offers exceptional conditions for performances, congresses, conferences, seminars, ecumenical meetings, large or small meetings, product launches, catering, fairs and exhibitions. It also includes a Gymnasium, housed in a modern building, with excellent design and where users can enjoy different types of physical activity. It has a capacity of close to 5,000 seats. 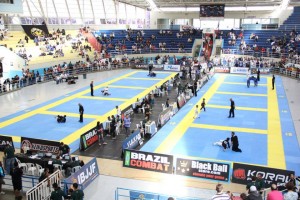 Considered to be a very tough championship for the simple fact it is held in Brazil. There are actually so many tough black belts in Brazil that never get to compete in the international circuit due to lack of funds, sponsorship or simply because of the distance and the bureaucracy of sometimes applying for a visa. Fighters from all over Brazil gather in Rio for this competition, everyone seeking the title which is considered very important. One of the reasons being that BJJ is a sport that started in Brazil. So being Brazilian champion is a title that many BJJ players look for.
Since the World Championships moved to the USA, the Brazilian Nationals have taken its place as the best BJJ competition in Brazil. 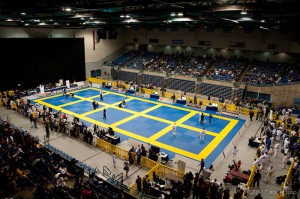 It’s first edition was held in 1995, having as winner the legend Rigan Machado. Together with the Brazilian nationals and the World Championship it is considered to be one of the big competitions organized by the IBJJF.

Representing one of the first steps toward internationalization of Brazilian Jiu-Jitsu, the Pan-American Championship has been held annually since 1995. While the first event garnered only 250 athletes, the event has grown every year and now hosts around 3,000 competitors.

The event was last held in Irvine, California, but has been held in other regions of the US in order to boost the expansion of the sport.

The tournament is being promoted as the largest Brazilian Jiu-Jitsu event in the world. Supported personally by his Highness H. H. Sheik Mohamed Bin Zayed Al Nahyan, the inaugural 2009 tournament had the prize purse of US$111,000. in 2015, the total prize money around 650,000$. The tournament total cost is around 5 million US dollars (including national pros etc..)

For the 2015/2016 season, the UAEJJF are implementing 4 grand slam tournaments outside the UAE, paying out large cash prizes for each open class, and for the black belt adult male weight classes.
Grand Slams will be held in : Tokyo (already passed), Los Angeles (already passed), Rio de Janeiro and London.
Apart from the grand slams, there will also be around 15 to 20 National Pro Events all around the world, for travel packages to the UAEJJF World Pro main event in April 2016 in Abu Dhabi.

There is also an official ranking, giving out money to brown/black belt at the end of the year.
WPJJC usually takes place at the Zayed Sports City Tennis Complex, in Abu Dhabi, U.A.E.. Participation in the national pros are not mandatory; however the winners of the national pros have an all expenses (airfare, hotel, meals) paid trip to Abu Dhabi for the tournament. 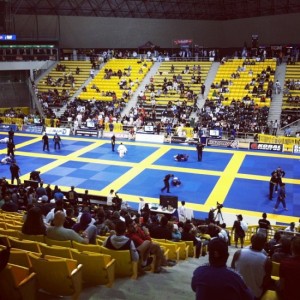 The World Jiu-Jitsu Championship (commonly known as Mundials) is the most prestigious Brazilian Jiu-Jitsu (BJJ) tournament in the world. They are hosted annually by the International Brazilian Jiu-Jitsu Federation. The first Mundial tournament to be held outside of Brazil was in 2007 at California State University, Long Beach in Long Beach, California, USA. This trend continued with the 2008 Mundials, once again in Long Beach, California. The first World Championship was held in 1996 at the Tijuca Tênis Clube gymnasium in Rio de Janeiro, Brazil, and has since grown tremendously, with over 1650 competitors (including 250 foreign athletes) fighting before a crowd of over 12,000 in the 2005 championship.

In a step forward for the professionalization of Jiu-Jitsu, The IBJJF plans to implement a pay system by the end of the 2015/16 season (the day before the 2016 Worlds). BJJ players ranked number 1 on the male and female adult black belt rankings will each receive a $10,000 prize.