The Rapid Growth Of BJJ & MMA in Singapore 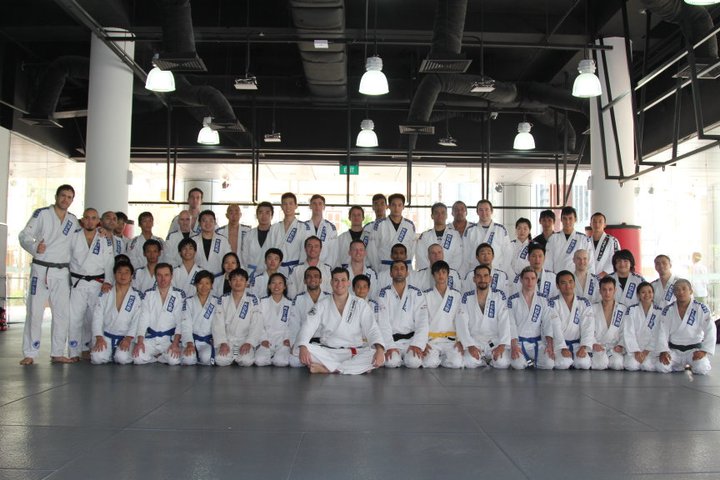 Singapore, the small City State in South East Asia now counts among the richest countries in the world. Jiu-Jitsu and MMA have grown there at the same pace as this tiger economy. Here is a training report from the famous Evolve academy which is run by Rafael Gordinho Correa, that we published a few months ago. This article is the point of view is a white belt BJJ player from the Evolve academy.

“When I first faced BJJ black-belt, Brazilian Jiu-Jitsu Mundial and regional champion Zorobabel Moreira on the mat in Singapore last year, I thought I had signed up for a personal self-defence trial. I had no idea what BJJ was and had never worn a “gi”.

Someone had to tie my belt for me.

When Zoro tapped my thigh, I thought he meant “come on woman, put some strength in it”, so I arched further into that early armbar like a woman possessed. Zoro left unharmed but I was sweaty and smitten.

This sport combined everything I loved – it was chess, ballet and jazz all rolled into one. The smallest of moves allowed me to get in touch with a strength I didn’t know I had. Built like a Chihuahua, I had never thrown anyone to the ground. I felt invincible. I was hooked.

Quietly, over the last five years, some 10 gyms have grown here in Singapore offering BJJ.

2009 marked a pivotal moment for the sport. It was the year Thai-born Chatri Sityodtong opened the first branch ofEvolve MMA. Now with two branches, Evolve is the largest academy for BJJ and Muay Thai in Singapore, with membership reportedly in the thousands. In September 2011, CNN named Evolve Asia’s top MMA organisation.

I’ve checked out a few of the smaller gyms and have not once walked away disappointed by the generosity of spirit that teachers of the sport seem to share. However, I love the sweat, swagger and sheer talent on display at Evolve. Half of the time that I’m pinned in my least favourite position, the half-guard, I’m almost incredulous at the highly-decorated team of teachers who so willingly put their limbs at risk to share their knowledge with newcomers like me.

It is home to so many BJJ “Greats”. At Evolve I’ve watched Renzo Gracie demonstrate his favourite escapes, seen Japan’s Tōbikan Jūdan or 10th degree black belt grandmaster of flying submissions Shinya Aoki glide through a move, had Black belt Mundial champ Leandro “Brodinho” Issa point out I was wearing my gi pants back-to-front and kicked myself for missing Roger and Kyra Gracie’s seminars.

I’ve also had the opportunity to train personally with my favourite BJJ legend, Professor Rafael “Gordinho” Correa de Lima. The Mundials world and Brazilian national champ has a ferocious attention to detail and the world’s most powerful toes.

As a kinesthetic learner, my private lessons with Professor Rafael remain some of my most unforgettable for I think I learnt quite a bit by sheer osmosis. I’ve never been able to replicate his thigh-shredding toe claw, but he helped me learn some key concepts very quickly. Trapped in his guard while he demonstrated a move that involved his upper arms, I remember feeling how the movement really began from his “hara”. The movement involved his arms but was anchored in his belly. Knowing that, unlocked another piece of the BJJ puzzle for me.

Professor was tough but had a great sense of humour. When I pronounced – truthfully – “something happens when you put me into a headlock; my brain switches off”, he was unmoved. “Then” he said “we will do more headlocks”. Yes his time cost more than my lawyer’s, but it was an invaluable learning experience.

MMA-Japan.com has crowned Team Evolve the top fight team in all of Asia. It is a joy to learn from some of the world’s best. Watching my teachers actually fight though, is an experience all its own.

Seven months after my first class, I was cheering my teachers on at the Singapore Indoor Stadium at the first One Fighting Championship (One FC) on Sept 3rd 2011. It was a memorable three and a half-hour display of intense high-level MMA athleticism.

Unlike that early UFC 4 moment when the announcer pronounced “nothing there” when Royce Gracie locked Dan Severn in a triangle, the live Singapore audience knew what to look out for and were vocal about it. Primed by cable T.V. and the growing presence of MMA on the net, many were familiar with integral moments when a BJJ move would seal a fight and were hungry for the fighters to take it to the ground.

When, in my estimation, Zoro’s opponent took too long to get up after what looked like impact to his man-bits, I shocked myself. My inner lout was unleashed. As I vaguely recall, the hush of the arena of was broken by a shrill voice; mine. “Oh get up! Be a man”. To which, the guy sitting next to me said – with great empathy for the momentarily crouched UFC veteran Andy Wang – “oh, he is being a man”.

One FC is a Singapore-based promotion with such a collaborative pan-Asian network, it has the unprecedented potential to propel both MMA and by association BJJ, to mainstream awareness faster than any other new sport I’ve seen take root here. One FC already has a partnership with ESPN STAR Sports for a landmark 10-year cable television deal with coverage that spans 24 countries.

CEO of One FC Victor Cui always struck me as a man who knew just how to harness the power of diversity when it comes to business in Asia.

I first sat across the Canadian-born, Singapore Permanent Resident, and son of a Filipino diplomat after he had officially announced the inaugural One FC.

In a room milling with press hungry for an interview, Victor very patiently answered every one of my questions including how he planned to make MMA the number one sport in the region.

Named the “number one man in the Asian MMA scene” bythefightnation.com, Victor Cui has put Asian MMA on the world’s notice within the short span of a less than a year.

Besides, reportedly, the largest fund for MMA provided by a group of international investors, the political science graduate from the University of Alberta also has a wealth of experience designing sports events. The former director at ESPN worked at the Commonwealth games in Malaysia in 1998, the Sydney Olympics in 2000 and at the athletic world championships in Spain and Canada.

Besides clout, connections and cash, it is Victor Cui’s inclusive approach to building a pan-Asian community through his “One FC” network that gives me hope for the growth of BJJ in Singapore. The network is an alliance of the top fight promotions, gyms and fighters in the region including organisations like Dream, Team Lakay and URCC. A truly grassroots-driven professional circuit will distinguish ONE FC from other Asian promotions and help sustain its growth given perennial competition for market share in Asia. UFC for example will stage its first fight card here at the end of 2012.

I witnessed the ONE FC network in action recently. The recent One FC summit in Singapore was billed as a significant watershed meeting of 150 of the movers and shakers of MMA.

What I liked about the summit was how there was space for the big and little guys at the roundtable of dialogue on issues that could impact the growth of MMA in Asia.

The powerhouses of Asian MMA were present at the summit; Bubbles Aguilar (Co-founder of URCC), Moon Hong Jung (CEO of ROAD FC), Luke Pezzutti (Co-owner of Cage Fighting Championship) and Matt “The Wizard” Hume Chief official and head referee to the ONE FC organization. Also present were the smaller players like the owners of gyms of varying sizes across Asia. Established media, bloggers and local broadcasters all mingled. Panellists took questions from all who could make it to the mike.

As we speak here in Singapore, the world is listening-in, and talent is coming on board. Like six-time US National Champion, former US Olympic Greco-Roman wrestler Heath Sims. Heath sold his share of Team Quest to move to Singapore to head Evolve’s wrestling programme.

I asked Heath what the tipping point for the decision was and he related a speech that he heard from CEO of Evolve Chatri Sityodtong. It was almost similar to the speech Chatri delivered at the One FC summit in which he declared that in five to ten years, Asian MMA would surpass MMA in the U.S. and be “the centre of the world”. I was not surprised to hear of Chatri’s persuasion.

But Chatri did surprise me once when he said he did not think he was a good public speaker. ln my twelve- year-career as a broadcaster, I have met many professional orators but have witnessed few who have the rare ability to profoundly move in an unscripted “live” interview as the man named one of just four conservators of Sityodtong Muay Thai in the world. I’ve watched audiences light up in reaction to his obvious charisma.

I first sat across Chatri in an interview back in 2011. I wanted to know how the martial arts had changed his life.

He had trained in Muay Thai as a child under the legendary Kru Yodtong Senanan whose Sityodtong Camp in Pattaya, Thailand has not only fielded some of Asia’s best fighters but provided a home to many orphans in Thailand.

Chatri, who has trained and fought professionally, shared how it was Muay Thai that was the ground under his feet during a period of incredible personal hardship.

Just as he was about to leave for a place at school in the US, the Asian financial crisis hit. His family was wiped out financially. Still, he took a leap of faith and made the painful decision to leave a family in disarray for an education he did not know how he was going to afford.

He continued to train and teach Muay as a student and through sheer mettle achieved his Harvard MBA.

As the man behind Evolve, the now multi-millionaire, who has been named MSN’s 2011 MMA Coach of the Year, brings business acumen and influence to the BJJ scene here. He not only brings the best out of the athletes, he has brought outstanding BJJ, Muay Thai and MMA talent to our front door. Singapore and its sporting scene, is richer for Chatri Sityodtong.

Powerful personalities aside, the future of MMA and BJJ lies in the hands of many – the fans, gyms, sponsors, bloggers, media, government partners, instructors, fighters, the big babies like me who love the sport (but need time-out when we break our fingers) and the little samurai’s.

One who I am quite sure will be an exceptional home-grown martial artist of the future, is Kinaree Adkins. The pint-sized 9-year-old has a near-perfect attendance card at Evolve and has won first place at two prestigious grappling tournaments in North America. An icon-in-the-making, the patch on the seat of Kinaree’s gi pants says it all – “hard work pays off”.

It will take work for BJJ to flourish in Singapore, but I have a hunch, that steered by the many hands of people with a passion for the martial arts, it will. And along the way, many more Singaporeans are going to fall in love with the sport with an unassuming acronym, but the power to allow us all to get in touch with a greater strength within.”