The 12 Most Iconic Gis in Brazilian Jiu-Jitsu History 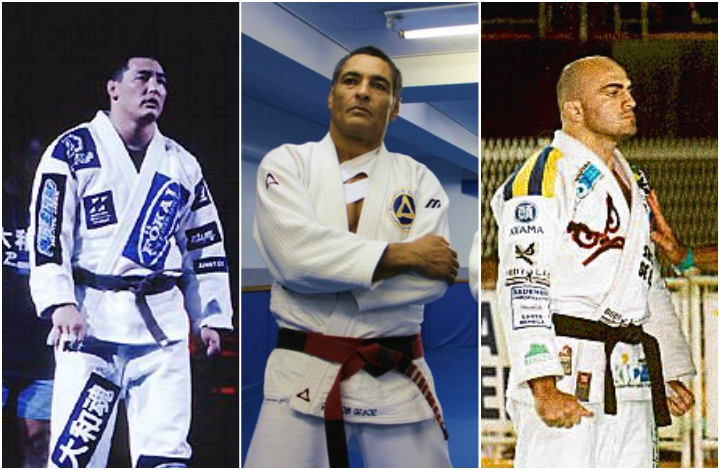 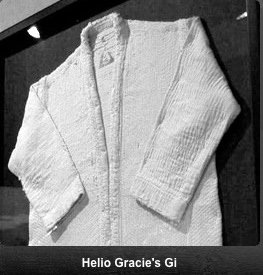 This was the gi /kimono worn by Helio Gracie in his fight against Masahiko Kimura for the world championship on October 23, 1951. It was hand made by his wife Margarida. 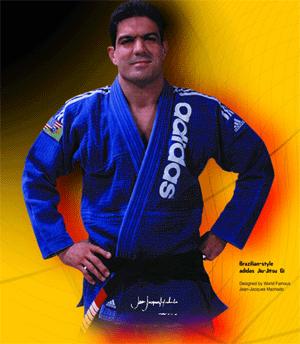 Adidas, a company with long history in supplying sports equipment, teamed up with the legendary Jean-Jacques Machado in the early 2000’s to create a gi specifically for sport jiujitsu. It was Adidas’ first ever venture into Jiu-Jitsu and they since then have regularly released BJJ specific Gis including its latest line worn by Clark Gracie. 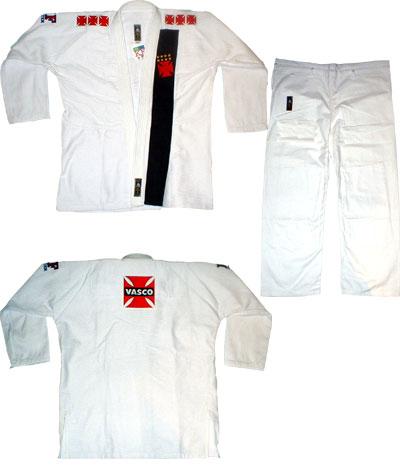 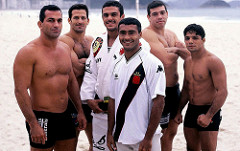 Kimono Fighter (KF) has been around since the late 90’s. The brand is from Rio de Janeiro and sponsored the Famous Nova Uniao team.
KF ‘s owner Luis Herminio, was a big financier of the Olympic Brazilian Jiu-Jitsu Federation (CBJJO) which was led by Andre Pederneiras and which rivaled Carlos Gracie Jr.’s IBJJF Mundials. KF released a limited series of BJJ Gis which were in the colours of famous Brazilian football teams (Vasco da Gama, Flamengo, Fluminense). The Vasco model was very popular as it was worn by many members of the Brazilian Top team such as Vitor Belfort, or Minotauro. 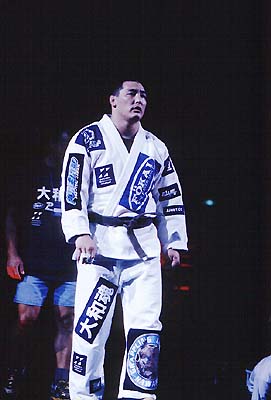 BJJ black belt Enson Inoue wore this heavily patched up Gi (the brand is unknown) for the entrances of his MMA fights in Japan. A few years ago, Tatami Fightwear released a limited edition Gi which had the same patch pattern: The Enson Inoue – Spirit of Japan. 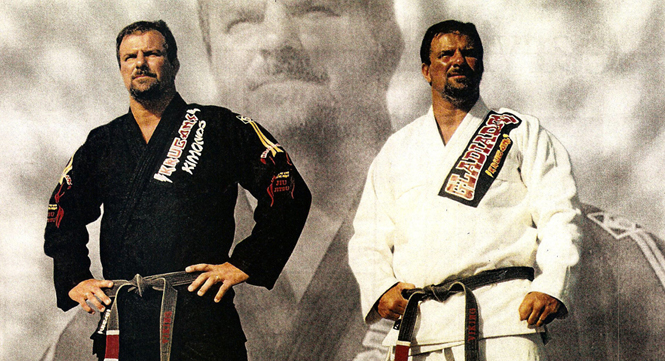 Krugans was founded by a Brazilian black belt and surfer called ‘Viking’. The brand emerged in Rio de Janeiro in the mid 90’s and quickly was sold in the USA through a few Brazilian BJJ instructors. It was the first BJJ Gi to not have seams in the back like most Gis of the time.

HCK is one of the most famous US old school brand brands. They are cheap, simple, and indestructible.The were worn by many of the top US BJJ athletes in the late 90’s to early 2000’s and also sponsored Randy Couture.

HCK’s founder, Howard Liu on how he started his brand:

In 1996 I was on a business trip to Hong Kong, looking for a martial arts uniform sewing factory to sew some BJJ uniforms of my own design. I stumbled across the factory that sews for both Mizuno and Adidas (as well as a few other high end Judo gis) At the time I was the very first to bring them a BJJ concept.

HCK took off, and has become universally acknowledged as the World’s finest grappling uniform (numerous consumer report articles in Martial Arts and Sports magazines around the World verify this). In 2000 the Hong Kong sewing factory, behind my back and without authorization, shared my design, construction and fabric secrets, and specifications to both Mizuno and Adidas. The Rickson Gracie Mizuno gis AND the Jean Jacques Machado Adidas Signature gis are made off of my designs. So, I am actually the creator/origin of both of these lines.

When I found this out I fired the Hong Kong sewing factory. I then discovered another factory in Southern China, that is actually a superior sewing factory to my original Hong Hong source. My uniforms have been made in Southern China since 2000, so there is no longer a connection between HCK and the factory that sews for Mizuno and Adidas. 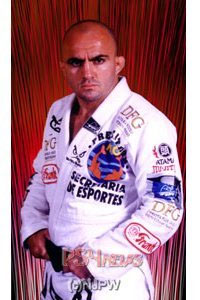 When Wallid Ismail put Royce Gracie to sleep with a clock choke during a Jiu-Jitsu super fight in 1998, he wore a heavily patched up Atama Gi which showed how many sponsors he had. Ismail was the first ever pro Jiu-Jitsu fighter. This was the first time a BJJ athlete wore that many patches on a Gi. Many would soon follow Wallid’s example. 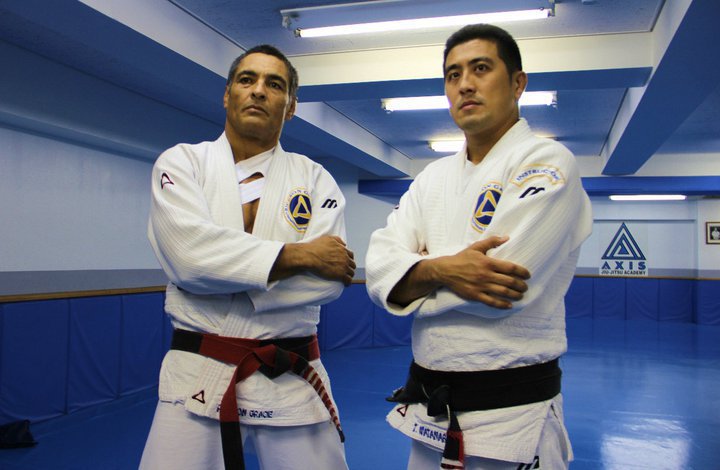 About 15 years ago Mizuno made a special signature Gi for Rickson Gracie. It was based on the Mizuno Conquest Judo Gi but with a few modifications. The cut was more of a BJJ Gi cut.
This model is not made anymore. It’s now a collector’s item. 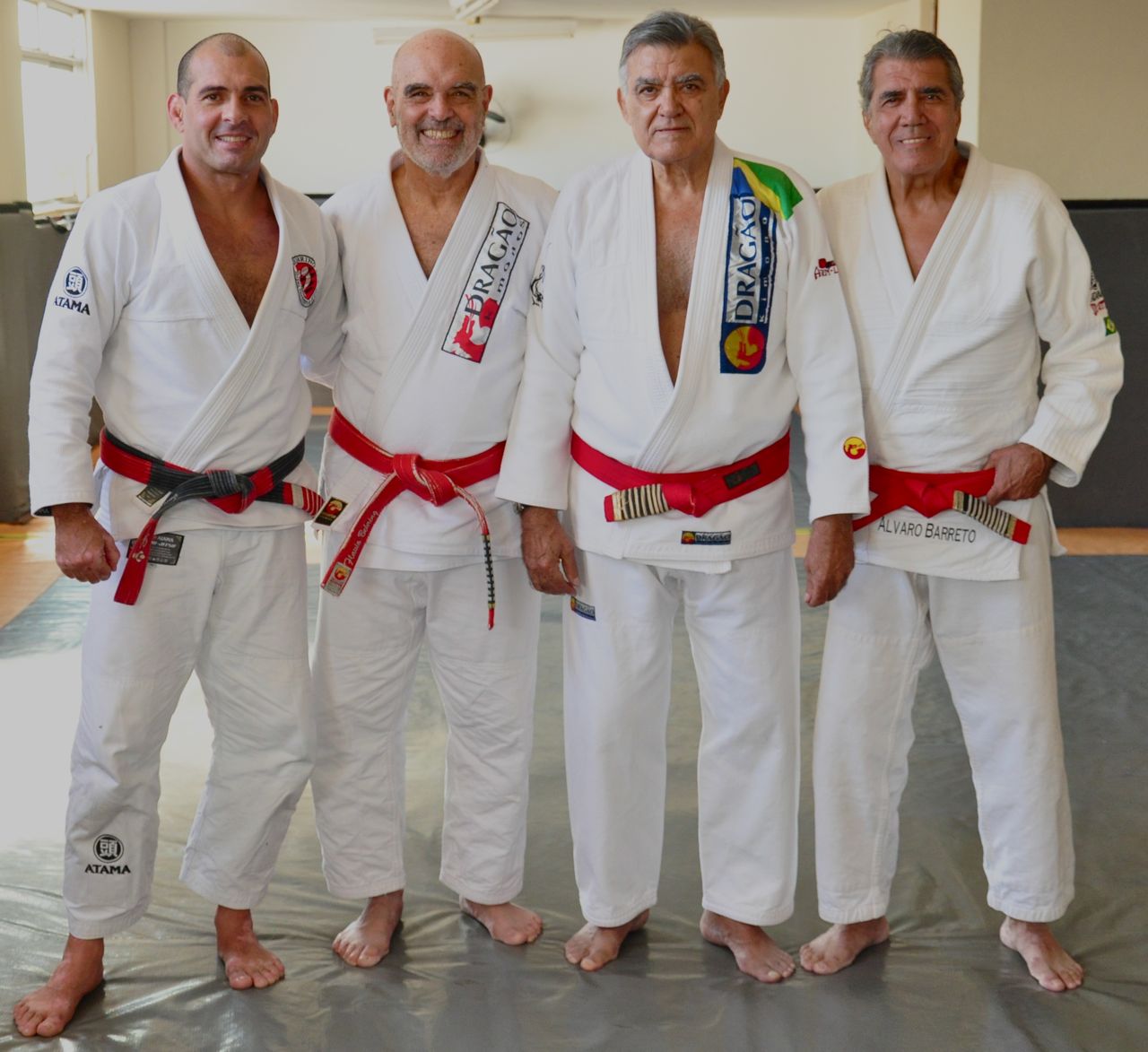 Dragao Kimono is the oldest martial arts brands in Brazil. It has been in the the market for 30+ years and have produced for brands like Mizuno, Everlast, and Bad Boy. It came up with a line of BJJ Gis in the mid 90’s after the explosion of the first UFC’s. They are worn by members of the Behring family, and back in the day by Fernando Margarida and also the Mendes brothers. 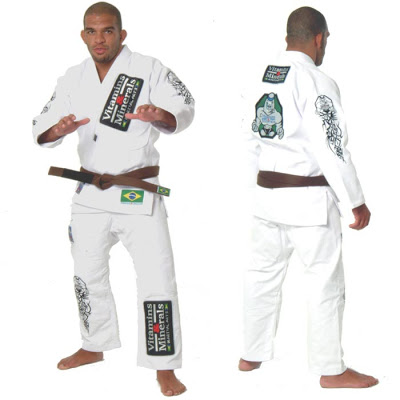 Vitamins & Minerals was an MMA and BJJ brand that came out of Brazil in the early 2000’s. They sponsored many MMA and BJJ fighters, mostly Brazilian Top Team members. They had a very popular BJJ gi (which was produced by MKimonos) that featured tribal designs.

MKimonos was established in 1995 by Luciana & brother Marcelo Machado after Marcelo received his black belt from Master Royler Gracie. MKimonos started in a small factory in Ilha do Governador in Rio. Luciana & Marcelo began selling kimonos to Marcelo’s students at Gracie Tijuca & Gracie Humaita which was run by Royler Gracie. MKimonos are the originators of many of the new weaves we see today from the hybrid weave & summer weave, and also the first company to use the gold weave. They have sponsored such athletes as Royler Gracie, Saulo and Xande Ribeiro, Samir Chantre, Shaolin Ribeiro etc..

Atama has been present in BJJ since 1989, and is for sure one of the first and most traditional kimono brands. The classic ATama Gi is still sold today and is arguably the most famous BJJ Gi. They also released a very BJJ Gi which featured both Brazilian and USA flags. 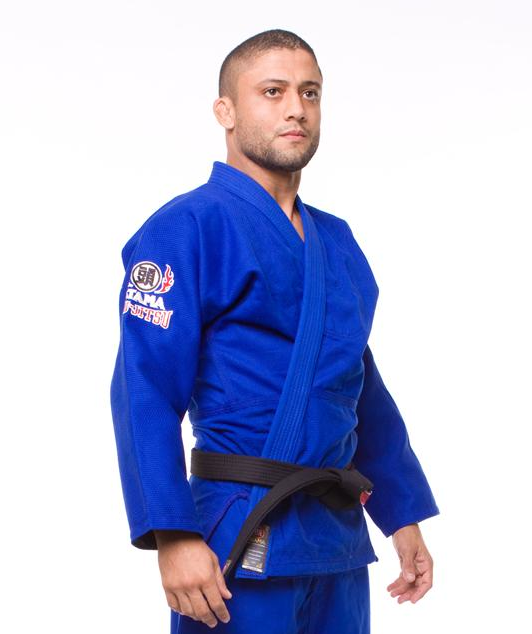 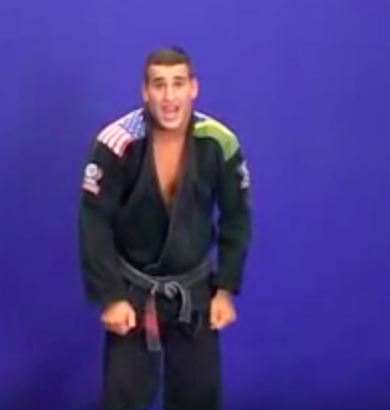