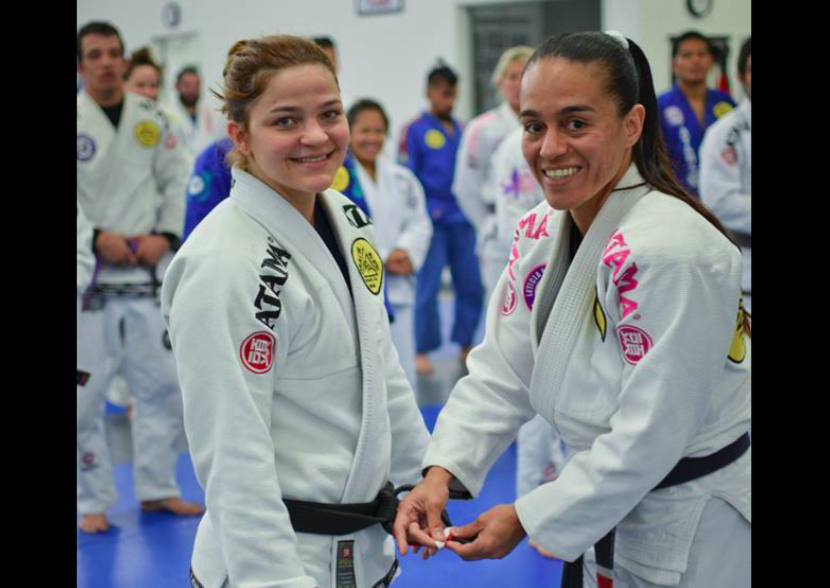 Female athletes face a variety of difficulties through their career. Traditionally speaking it was always harder for women to succeed in male driven fields but sports, and martial arts in particular, present an additional layer of difficulty. In spite of obstacles many have prevailed. Here are some of the most successful female operated BJJ academies around the globe: Hannette Staack is one of the most accomplished female black belts in bjj. She is a founding member of the Brazil 021 BJJ team along with Andre “Negão” Terencio and an instructor at the Brazil 021 Chicago headquarters. Hannette totals 8 world titles and several ADCC wins. Hannette has made several active attempts to support women doing bjj, her seminars frequently share information critical for both effective self-defense and competitive woes. Brazil 021 team now has branches in USA, Canada as well as Brazil. Back in a 2012 interview with TXMMA she offered some insight:

More women are training now than ever before. What do you think is the driving force behind the increased number of women in the sport and art? What is the key to continue to increasing these numbers?

I think more women are training now because they can see the benefits of BJJ. Before it wasn’t very clear, a lot of people associated Jiu-Jitsu with the UFC and many of them didn’t want to train because they didn’t understand the principals of the art. They didn’t know that Brazilian Jiu-Jitsu is the art where a small person can defeat or survive a bigger opponent, which is great for everybody, especially women. More women are getting involved because they are spreading the word and I think that is the best way to get more people to join the art, by word of mouth.

Hannette also notes a big difference in prizes between men and women and she notes there should be more categories for women as the sport expands. Emily Kwok is a Japanese-Canadian black belt under Ricardo Almeida. Her efforts to make the female bjj community expand are duly noted. In the past, she has done work with groundswell grappling concepts to make sure men, women and children practicing bjj can self-actualize through practice. Notably, she was also involved in the “How to Defeat the Bigger Stronger Opponent” series produced with Stephan Kesting.

Emily Kwok also runs the Princeton BJJ academy. Her background, however, is strictly sport jiu-jitsu which is something admirable because the socio-cultural context still presumes it’s more acceptable for women to be self-defense oriented. Princeton BJJ caters to users of all needs, together with the other instructors she encourages people to join regardless of their motivation. Princeton BJJ is also in the Marcelo Garcia Association. This cooperation came through getting to know Marcelo’s wife Tatia Garcia and training with her. Nowadays Emily is also involved in managing a part of MGInAction, Garcia’s virtual academy and training database. Leticia Ribeiro is widely considered one of the top 10 best female fighters of all time. We won’t be accounting her many medals and competitive accomplishments on this occasion. Leticia Ribeiro is the head coach of the Gracie Humaita female team. In addition to her athletic victories she is also an expert when it comes to teaching BJJ. She runs the Gracie South Bay jiu-jitsu which is located in San Diego – the bjj Mecca.   Leticia on facing challenges as a female in BJJ (from an interview with inside bjj):

In the past, it was worse. It was very difficult to find a sponsor and even harder to be in a magazine even for champions. Now things are much better. The girls can make a living from the sport especially the black belts. I think it’s going to get better as well. We need to keep working hard, training, and developing women’s Brazilian Jiu-Jitsu programs around the world.

And on how to attract a larger female following for BJJ:

In my opinion, the first step is to focus on creating ONE good student. This helps because the girls that came to the gym for the first time are more comfortable training and practicing with a girl. If you have one girl who is a blue belt or above, it really helps to attract new girls to the school. Another good idea is to have a women’s only class if you have enough students. It’s also important to offer self-defense to female students since some girls don’t want to compete but they want to learn self-defense. Head coach at the MMA gym located in Berkeley, California is none other than Lily Pagle, the woman who hearned her bjj black belt at age 61. Her story is pushing the inspirational limits. She started training at the age of 50. According to her coach and SBG guru Matt Thorton, her understanding is among the best. Lily is his 7th black belt and only the first female student to achieve that level. You can read her article on her own bjj journey by clicking here. operates under the Ribeiro banner in France, but more importantly it is owned by Laurence Fouillat Cousin. The first European to triumph in the black belt adult division at world championship accents self-defense as well as self-esteem improvement and actualization in her teaching. In the past, she even worked beside a psychotherapist to help women who have been victims of physical violence. is run by Leka Viera. Leka Viera also left her stamp in the history books by being the 1st woman to award a black belt to another female. In partnership with Rigan Machado, she awarded the first black belt given from a female to a female to Cindy Omatsu. The first female bjj star more than deserves her place in history. Head coach of Elite Brazilian Jiu-Jitsu team  is Miriam Cardoso, 2nd degree black belt. 5x World champion in bjj was raised in Brazil and trained under Carlos Gracie Jr. and Hercules Baptista. Her many awards are hard to outshine but for a while now she has been runing her own academy in Redmond, Washington. is lead by a female legend – Cindy Hales. Cindy Hales holds many medals in jiu-jitsu but she is also a pioneer in women’s mma. It’s worth also mentioning she is one of the female dirty dozen  – first 12 female black belts in bjj outside Brazil. Here are some of her thoughts on women in jiujitsu as spoken in an interview with BJJ For Women:

I would also encourage jiu-jitsu women, and all students, to make sure they find the right environment for them; a place where they feel safe, supported, and respected. I have been in gyms that were not healthy for me, and it greatly impacted my growth in the sport as well as my growth as a person. Finding a team that is supportive, and shared the same goals as me was critical in making the next big leap in my journey. It took me a while to really recognize this. I initially thought that the gym with the most winners, the toughest, most savage technique was the best path to being a champion. I eventually realized that this was only half of the equation, and that it didn’t afford for the personal growth that I was looking for, and needed. is a female focused gym operated and owned by women. It is unique in offering small group female only classes in bjj, kettlebells and boxing, and combined classes in bjj and muay thai. It’s owned by Gina Franssen, Minnesota’s first female bjj black belt. operates under the guidance of Kelly Hassell-Cramer. She is a Charles Gracie black belt. Charles Gracie Jiu-Jitsu academy does not shy away from the difficult subjects. Just this past couple of weeks they spread information for the sexual assault awareness month. The self-defense workshops at this academy are free and patrons of all ages are encouraged to take part. If you the participants wish to donate, the donations are accepted on behalf of Tahoe Safe Alliance, a non-profit community based organization that helps victims of violence. The owner and chief instructor of Gracie PAC MMA is Cris Rodriguez. Cris “Midget Twister” Rodriguez is a lifelong martial artist and a bjj black belt under Rob Kahn and the first female black belt under the Royce Gracie Lineage. is run by black belt Tammy Griego. Long time competitor has been focused on teaching for a while now. Her commitment to making sure jiu-jitsu is for everybody in New Mexico has been admirable. or Trinity BJJ as it’s sometimes referred to as run by Lana Stefanac. Ohio born Stefanac has made her name by being the first American woman to come in first place both in her weight class and open in the brown/black belt division at the ADCC. The fact that she was competing before the ADCC had separated the brown and black belt division speaks for itself. And also for the state of female bjj which has changed but still has ways and ways to go. is co-owned by 2nd degree black belt Ana Laura Cordeiro. Her competitive career was very impressive but nowadays she finds teaching as one of the most positive, powerful experiences a life can offer. While the website offers typical information expected from a GB affiliate, there’s also a note announcing the Woman’s program should be coming soon. is co-owned by female instructor Sheila Bird. She is a 2nd degree black belt that was competing in bjj from 1998 to 2008. is co-owned by Gabriela Francis. She is a Brazilian born, life-long martial artist addict and one of jiu-jitsu’s finest fighters. She has been a black belt since 2007. Like most academies, they also have a women’s program mostly dedicated to aspects of self-defense.

While all of these women have impressive accomplishments there are still men who feel they would want to avoid academies where the head coach was a female. This is fairly baffling considering males in smaller stature have no problem establishing an avid following among them.

In any case, it’s very encouraging to see that success and respect these outstanding individuals have accomplished during the years whether you yourself are a man, woman or child.